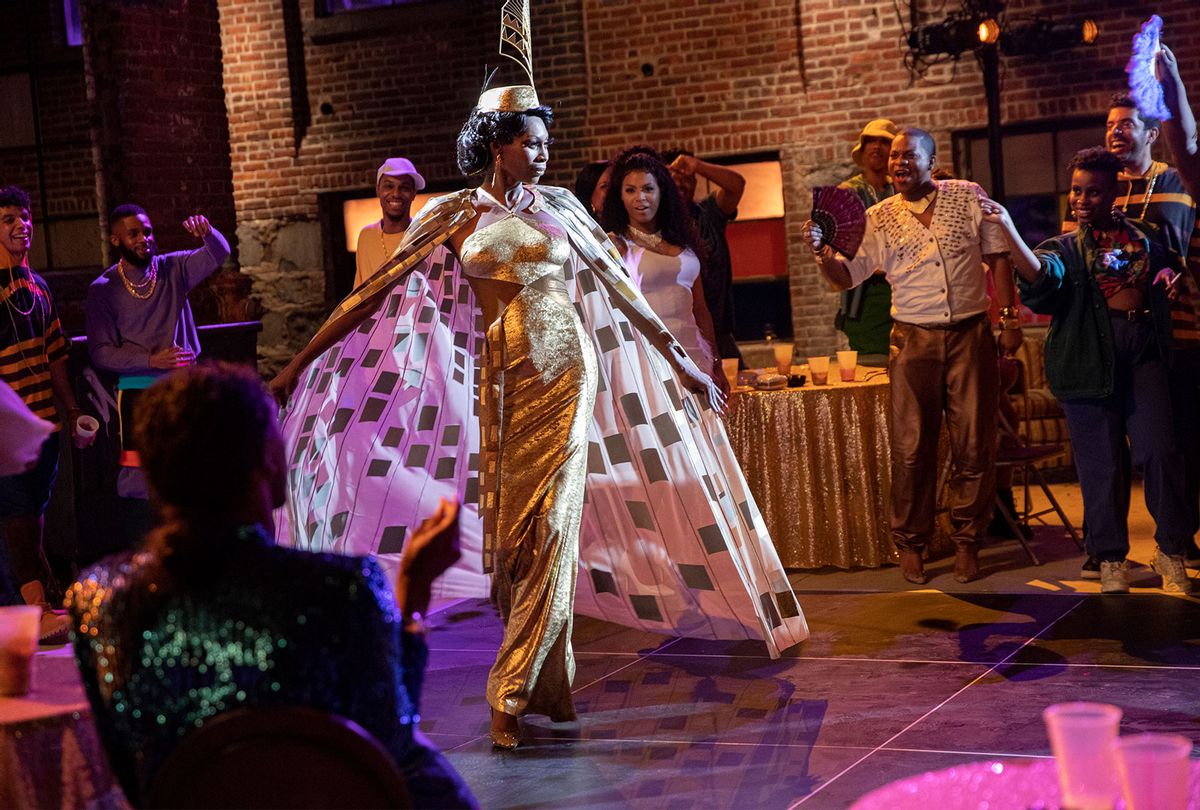 Going back to its debut, "Pose" tells us precisely what it is in the pilot's cold open, when Elektra and her House of Abundance strip a museum exhibit of its royal costumes and bash a plate glass window to make their hasty exit. From there they run straight to the ballroom, change into their pilfered gowns and crowns, and walk the Royalty category, sweeping it with a perfect score.

On cue the cops show up, the ladies elegantly offer up their wrists to be cuffed, and they sashay away as the crowd cheers. Do we see them plead out in court? Deal with any legal repercussions whatsoever for burglarizing a museum? Nope. A few lines of dialogue explain why nobody's going to jail, and while there is no plane of existence in which that explanation makes sense the story moves on.

Loving "Pose" means accepting such nonsense, if not all of it, as the trade-off for basking in the sublime. We make this bargain with all kinds of TV shows including others executive produced by Ryan Murphy and Brad Falchuk. One that the writers name-check is synonymous with New York, glamour and fashion, and if you can believe a journalist at a weekly publication can afford a closet full of haute couture – as so many did in the 1990s –  you should be ready to buy just about anything.

Remember that as "Pose" embarks upon its final seven episodes. We may be swept away by its portrayal of ballroom's outrageous creativity and appreciate its role as an escapist balm. The women in House of Abundance and House of Evangelista see ballroom as their means of defying the cruelty of the AIDS crisis in the 1980s and 1990s. But their grand ambitions are the heart of it, starting with House mothers Elektra (Dominique Jackson) and her daughter Blanca (Mj Rodriguez), whose rivalry defined the drama's first two seasons along with a torrid romance between Indya Moore's gorgeous Angel and a Wall Street exec played by Evan Peters.

He and the other wealthy white characters disappeared in Season 2 – a distinct improvement – placing the AIDS epidemic in a more central position. Never is there a point at which HIV/AIDS isn't pressing down on this community. Blanca got her positive diagnosis minutes after that initial Royalty walk, but it doesn't define her road in the series. It becomes her catalyst to live.

Celebrating their resilience is the primary directive of those opening "Pose" seasons, a shining arrow that became the candle in the second season's tunneling into the height of the epidemic when no treatments were in sight.

The final episodes continues that thread, making the ballroom become less central in the lives of its four protagonists Blanca, Angel, Elektra and Billy Porter's Pray Tell, the soul of this show . In 1994, however, there are treatments. There is hope.

"Pose" does not go out quietly, establishing its commitment to leaving on an emotional high straightaway with a full-fledged "stomp the children" extravaganza in its May 2 premiere – courtesy of Elektra, who else? Ratcheting up several cliches to maximum warp is its runway strategy. You want a wedding? "Pose" has sewn up an event this season guaranteed to make a bridezilla's head explode. Guest stars? A Pray Tell-centered episode, directed by Janet Mock from a script co-written by her, series creator Steven Canals and Falchuk, showcases the divas of NBC's 1990s comedy lineup including Anna Maria Horsford (of "Amen"), Jackée Harry ("227") and Janet Hubert (the original Aunt Viv on "The Fresh Prince of Bel-Air").

The other side of this coin reminds us that in the new season's initial timeframe the AIDS epidemic isn't over. No show in which death is a returning guest star leaves without shattering our hearts . . . which it does before reassuring us that all is love and community reigns supreme, that at the moment when you think all is lost, maybe it isn't. Most of the time. 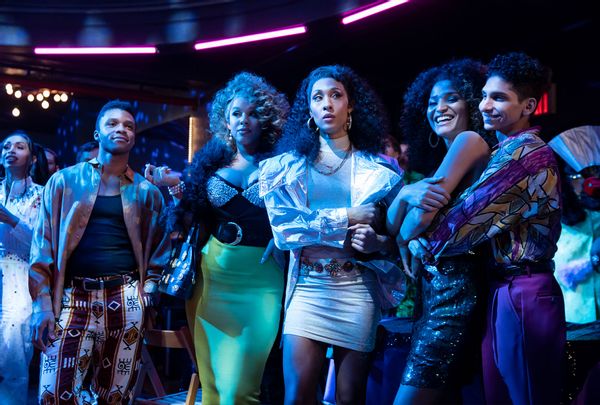 It's tough to begrudge Canals' choice to design his exit season as a wish fulfillment parade given how dire and unpredictable the second season was. Week to week, you could never entirely tell what was going to happen on "Pose." Sometimes the shocks were luridly comical, like the adventure that ended with Elektra entombing a dead man in the closet. Others, like Candy's awful murder, were gutting. Blanca gained ground as the mother of the House of Evangelista, then stood by as her children left her and her health deteriorated.

So if Canals wants to show us what life would look like for his characters if they got everything they want, desires previously realized only in that ballroom, maybe that's not the worst outcome given everything they've endured.

More ordinary shows would imply a Faustian element to that notion since getting what you want is never what it's cracked up to be and tends to cost dearly. Not this one. While no one sails through these last chapters without a hitch, "Pose" leaves them and us on a soft-but-firm bed of optimism at the end of a slide lubricated with tears, gasps and a whole lot of entirely implausible turns.

If you thought the scot-free museum heist beggared belief, then you underestimate Elektra and her imagination. Jackson's flamboyant performance always matches her character's outsized ambition, but this run makes sure we'll never forget her.

Anyway, the charm of "Pose" remains in its performances. Moore's vulnerability lends dimensions to Angel, and their chemistry with Angel Bismark Curiel's Lil Papi elevates a subplot that otherwise feels tacked on to the rest of the stories. This fresh arc inspires Rodriguez to endow Blanca with an added heft appropriate to her new work as a hospice aide.

The writers wisely train their focus on these characters and Elektra, aware that seven episodes means picking a few battles. That said, Hailie Shahar's light-hearted Lulu is one that receives a welcome bit of expansion.

In the main these final "Pose" episodes double as a long goodnight kiss to Porter's Pray Tell who, along with Blanca, travels this series in the shadow of an HIV diagnosis, watching his life partner and too many friends fade away in the hospital. (Sandra Bernhard's Nurse Judy, another figure given more screen time this season, is a gift in these scenes as she rails against the injustice of a healthcare system stacked against Black and brown patients.)

As the new season opens, Pray's despair drags him into alcoholism, and Porter channels a rage and sadness into his portrayal that transforms some truly hacky dialogue into if not gold then something passable. Only he can deliver, "I drink because I hate myself, and I hate myself because I drink!" with enough purposeful thunder to make it sail. But this has always been the case; the lines are less important than the vibrancy Porter lights them with.

That energy affirms the story's emphasis on a realness that ensures the most heightened moments find their way back to solid ground regardless of circumstance. When you've followed characters through funerals, into hospital wards and watched them make banquets out of SpaghettiOs and palaces out of hovels because the world wants to break them, it's tough to begrudge them a happy ending.

Enough about their harsh realities feels genuine enough for such grandiose fantasies to come off as a necessary indulgence. Enough of what we know about life for transgender men and women transforms whatever the victories they score into fuel. Enough of the truly insane, "I can't believe they did that" excursions balance out the sorrow that it's better to slap 'em on the hind ham and let them fly on by than complain. In the end, who are these fabulous unrealities hurting?