Smart Watch: "Pose" returns with a season demanding to be seen 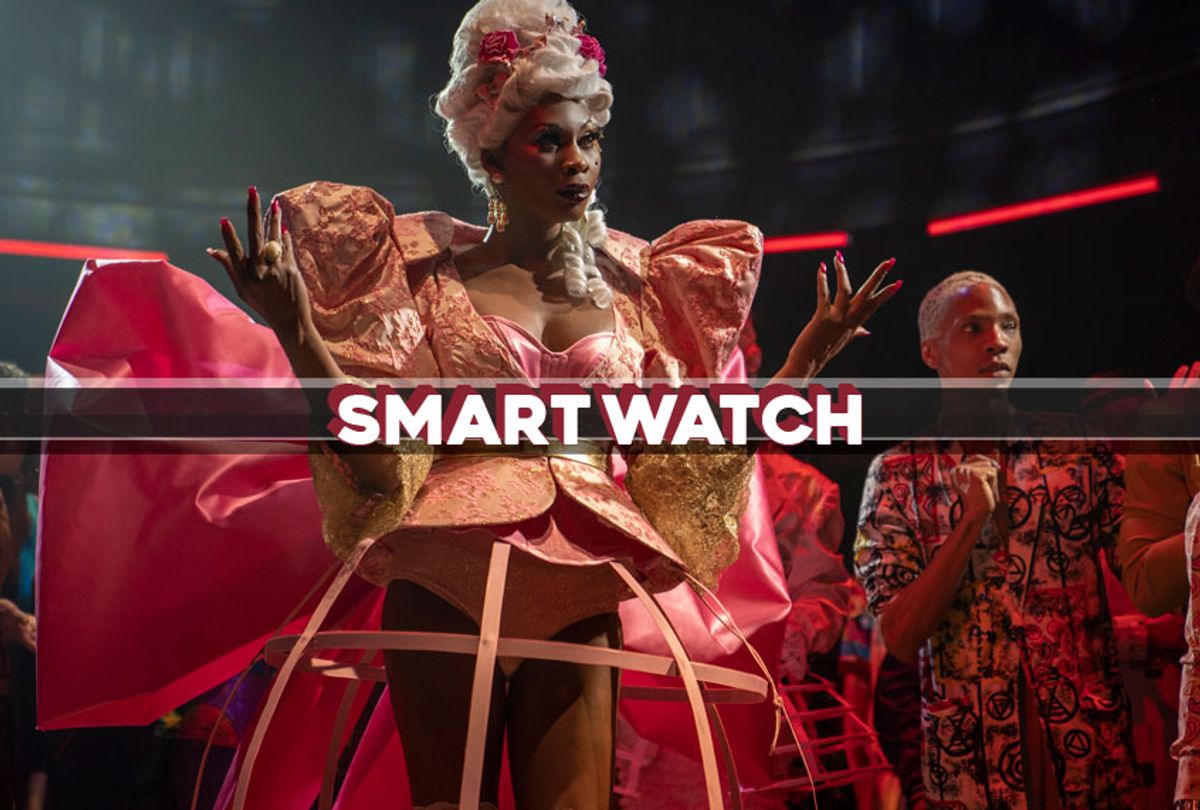 “Pose” opens its second season with a shot of Pray Tell (Billy Porter) and Blanca (Mj Rodriguez) leaning against each other on the prow of a boat. Sunglasses shade their eyes, and their faces look model-serious; this could be a glamour shot, and they could be riding someone’s yacht.

But if this second or two of this fantasy flashes across one’s mind at all, it’s dispelled as soon as the shot widens. The boat’s shabbiness announces it not as a pleasure vessel, but a public ferry taking the pair to an island destination — Hart’s Island, a public cemetery where New York’s indigent, homeless and otherwise forgotten are buried in mass graves.

They’re going to pay their respects to a loved one lost to AIDS, the latest in a string of memorials Pray Tell and Blanca have attended, and certainly not the last.

This announces, clear as a brisk day, what the viewer should expect in this new season. “Pose,” co-created by Ryan Murphy, Brad Falchuk and Steven Canals, exists as a celebration of LGBTQ culture, style, movement, art and joy. It also insists on reminding us that this whirl of dancing, fierceness, glamour and pageantry is a reaction to the deadly shadow of AIDS, an uncaring political climate, and a place that would take a population already pushed to the margins and wipe them off the map altogether.

Successful series intentionally and strategically build some version of capital during their first season that they can cash in later. “Pose” did this in this first season by supplying viewers with extraordinary excursions into ballroom culture while bringing us along as its characters negotiated New York City circa 1987, a place that values queer culture insofar as it serves the mainstream.

We gorged on the glory of Blanca, Angel (Indya Moore) and House of Evangelista battling House of Abundance, led by the imposing Elektra (Dominique Jackson), for supremacy in the ballroom. We also witnessed their frustration and anger at being subjected to every kind of indignity and abuse imaginable beyond the boundaries of their community.

The drama shows its transgender characters being denied employment, shunned in public spaces and herded to the fringes. Those that are granted opportunity and support in the cisgender world secure it at a price. As if the struggle to simply work and live is not enough, the growing AIDS crisis has already caught two of the story’s principal players, Pray Tell and Blanca, in its web.

In this new season, the crisis moves up from the secondary role to primary antagonist, flanked by violence and exploitation. Last season’s episode “Love Is the Message” shattered our hearts by placing us in a hospital ward where dying AIDS patients, Pray Tell’s partner among them, glow at receiving the smallest kindness, a performance of a song about hope and dreaming.

Season 2 leaps the story ahead to 1990, and it debuts at a time in the present when attacks on LGBTQ people are on the rise and the hard-won laws meant to protect them are being threatened and dismantled, at the halfway point of a year in which nine trans women, all of them black, have been killed. The death toll in 2018, by the way, was 26, according to the Human Rights Campaign.

But the runaway success of Madonna’s “Vogue,” a single that climbed the Billboard charts and would reign supreme that year, both in the U.S. and countries around the globe, also plays a significant role in season 2. That single made voguing all the rage everywhere, from middle America to the Middle East.

And in this close-knit community, watching Madonna lift a dance originating in their ballroom scene provides a neon sign of hope, especially for the youthful and naive Damon (Ryan Jamaal Swain), Ricky (Dyllón Burnside) and Lil Papi (Angel BIsmark Curiel).

More than once in moments of heady excitement, they prematurely celebrate that at long last, the white folks will see and appreciate them — that surely their girl, a pop singer who came up in the New York club scene, would bring the black and Latinx LGBTQ culture that helped raise her along for the ride.

There’s a sadness to knowing that did not happen, but there’s also bliss in witnessing a hope so ebullient that it even catches up Pray Tell in its optimism. Understandable; if nothing else, the national “Vogue” obsession distracts from the  die-ins, funerals and Act Up protests threading through their lives outside the ballroom.

The spectacle of “Pose” is a meticulous construct, one dazzles the beholder while concurrently prioritizing the humanity of its players. And in this new season the writers, including the creators along with Our Lady J and Janet Mock, who also directs and is a producer on the series, cash in some of that currency the show has built in popular culture by emphasizing visibility. As a wider audience discovers and celebrates the series, one can’t forget the script’s built upon black and brown queer people and their stories.

Moore’s Indya is the season 1 breakout, and their expanding success as a model and celebrity is owed in equal part to their vivacious personality, heavenly face and the juicy high drama of Angel’s dramatic but ultimately doomed romance with her married Wall Street executive Stan, played by Evan Peters.

Peters doesn’t appear in this season, and neither do Kate Mara or James Van Der Beek, who appeared as Stan’s wife and boss. The impression is they were mostly there in season 1 to add names to this project and ease its liftoff. But Porter, Moore, Rodriguez and the rest of the main cast are steering this ship fine on their own, thanks much. The expanded presence of Sandra Bernhard’s Nurse Judy and the addition of Patti LuPone as a shady businesswoman eager to gentrify New York are welcome and non-distracting bonuses.

Even more importantly, “Pose” fends off the common tendency to fetishize marginalized subcultures popularized by TV or film. In one scene a frumpy, very straight nurse tries to charm Pray Tell and Blanca by feebly voguing for them and clearly they are not having it. This attitude loudly pervades these new episodes, rightly so. These are creative, determined and ferocious people, only now they’re also fed up with being starved, attacked and ignored to death. They are nobody’s magical friends. But they are, without question, stars worth being seen.

“What you’re about to see is a cautionary tale. Be careful what you wish for, y’all.” Thus spake Virginia (Karrueche Tran), the irritating kewpie doll and co-partner in crime to Niecy Nash’s nail salon owner and new crime boss Desna. That’s right — the manicurists who spend two seasons under the Dixie Mafia’s boot now have a seat at the table, which brings them more money and more problems, and if you’ve never watched this series you may be wondering to yourself why you ever would.

It's simple — “Claws” is cheeky, subversive, outrageous, and smarter than the average summertime diversion. Nash leads a stellar cast that shows Dean Norris vamping it up as the patriarchal Uncle Daddy, Judy Reyes’ playing against type as Quiet Ann, along with Carrie Preston’s anxious Polly and Harold Perrineau as Desna’s autistic brother Dean.

"Claws" balances its sudsy operatics with plenty of comedy as well as ample commentaries about women and power. Desna is a boss, but life has long schooled her in the fact that nothing is free for working class women, especially women of color in the deep south. But this bonkers series shows this as opposed to lecturing us about it, flaunting a lot of flawless nail art along the way, kicking into high gear at the end of the season premiere with a crazy sexy musical number. And the introduction of "Twin Peaks" star Michael Horse as one of the season's primary antagonists further sweetens the pot.

On the topic of series that evolved from questionable premises, “Younger,” a comedic show about a youthful-looking middle-aged woman who passes herself off as a millennial to get her dream job in publishing, embarks on its finale season this summer.

And while it’s probably time — I mean, stress and time catch up with everyone eventually, even the female Dorian Gray that is Sutton Foster — that means we won’t get any more verbal duets and duels between Foster’s Liza and Hilary Duff’s Kelsey, who really are great together. But there’s a lot to appreciate about how accessible this series made its conversations about age discrimination in the workplace and society at large, and hopefully others will draw influence from its blend of intelligence and lightheartedness.

When this series set two generations before Krypton’s destruction debuted in 2018 its relevance to the much-vaunted resistance were clear as a bell.  But in case its parallels weren’t clear, in this season Superman’s grandpa Seg-El (Cameron Cuffe) throws in with a band of rebels who have problems getting on the same page, while the totalitarian general Dru-Zod (Colin Salmon) is all about making the Kryptonian capital city of Kandor great again by conquering other worlds.

While most people may have reached their limit with shows built around Trumpian themes of corruption and power, Cuffe lends a scruffiness to Seg-El that’s well matched by Shawn Sipos’ Adam Strange. We’re not in want of superhero stories, but this is a well-done prequel that adds some dirty layers to the history of a comic book icon primarily known as a Boy Scout. Tune in and odds are you won’t want to check out.