Beyond London, Berlin and Warsaw, protesters also took to the streets in Moscow and occupied Ukrainian cities 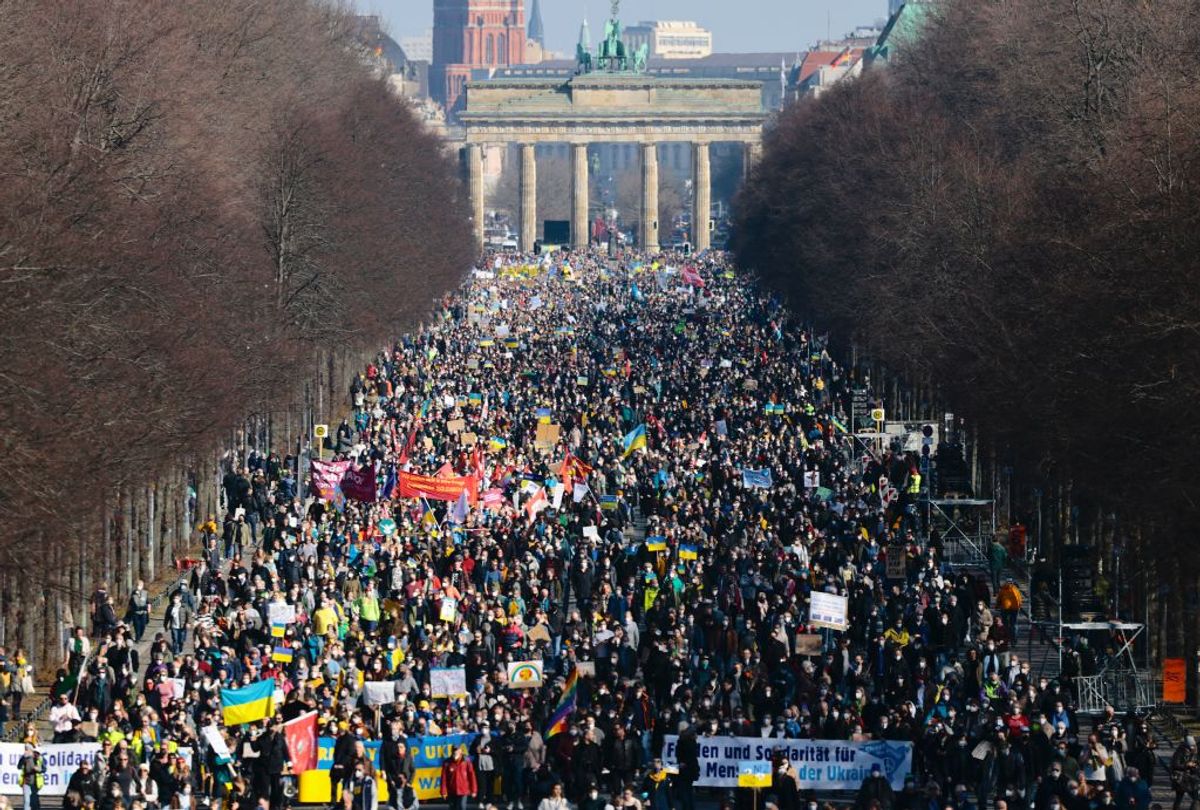 People protesting against the ongoing war in Ukraine gather on March 13 in Berlin. (Hannibal Hanschke/Getty Images)
--

Tens of thousands of people took to the streets to join antiwar demonstrations across Europe on Sunday as Russia continued its deadly assault on Ukraine, bombarding major cities and intensifying a humanitarian crisis that is having reverberating effects worldwide.

In addition to protests in Berlin, London, Warsaw and Madrid — where participants carried signs and banners that read "Stop the War" and "Peace and Solidarity for the People in Ukraine" — demonstrations sprang up on a smaller scale in occupied Ukrainian cities and in Moscow, despite the threat of arrest and police brutality.

RELATED: There is no "Putin wing" of the GOP: Why almost no Republican backs Ukraine over Russia

Thousands of Russian antiwar protesters have been detained and abused by law enforcement since the invasion of Ukraine began on Feb. 24, according to human rights organizations.

The demonstrations Sunday came amid some signs of diplomatic progress in talks between Russia and Ukraine, which have been negotiating on the border of Belarus since the early days of the invasion.

Mykhailo Podolyak, an adviser to Ukrainian President Volodymyr Zelenskyy, said Sunday that Russia is "beginning to talk constructively" and predicted that "we will achieve some results literally in a matter of days."

Leonid Slutsky, a Russian delegate to the negotiations with Ukraine, echoed his counterpart's assessment.

"According to my personal expectations, this progress may grow in the coming days into a joint position of both delegations, into documents for signing," Slutsky told reporters Sunday, without offering specifics on what an agreement would entail.

Seemingly positive developments in diplomatic talks came as Russia showed no sign of easing its attack, which has forced more than 2.5 million people to flee Ukraine and internally displaced millions more.

Zelenskyy said Saturday that around 125,000 people have been able to escape through humanitarian corridors established in besieged cities, but hundreds of thousands remain trapped in Mariupol and other areas facing heavy shelling from Russian forces.

Early Sunday morning, Russia bombed a Ukrainian military facility located just 22 miles from the border of Poland, a NATO member. The airstrike, believed to be Russia's westernmost attack on Ukraine thus far, killed dozens of people and wounded more than 130 others.

Brent Renaud, an American journalist who had previously contributed to the New York Times, was killed by Russian forces in the town of Irpin, Ukrainian authorities said Sunday. A second journalist who was traveling with Renaud was reportedly injured.

"We are shocked and saddened to learn of the death of U.S. journalist Brent Renaud in Ukraine," Carlos Martinez de la Serna of the Committee to Protect Journalists said in a statement. "This kind of attack is totally unacceptable, and is a violation of international law. Russian forces in Ukraine must stop all violence against journalists and other civilians at once, and whoever killed Renaud should be held to account."

According to the UN, at least 549 civilians have been killed and nearly 1,000 have been wounded since Russia invaded Ukraine, estimates that are widely believed to be significant undercounts.

Local Ukrainian officials said Sunday that 2,187 civilians have been killed in Mariupol alone since the start of Russia's attack.

Read more on the Ukraine conflict and the state of the world: