Meanwhile, Gingrich has expressed confusion over the distinction between a computer and a cell phone 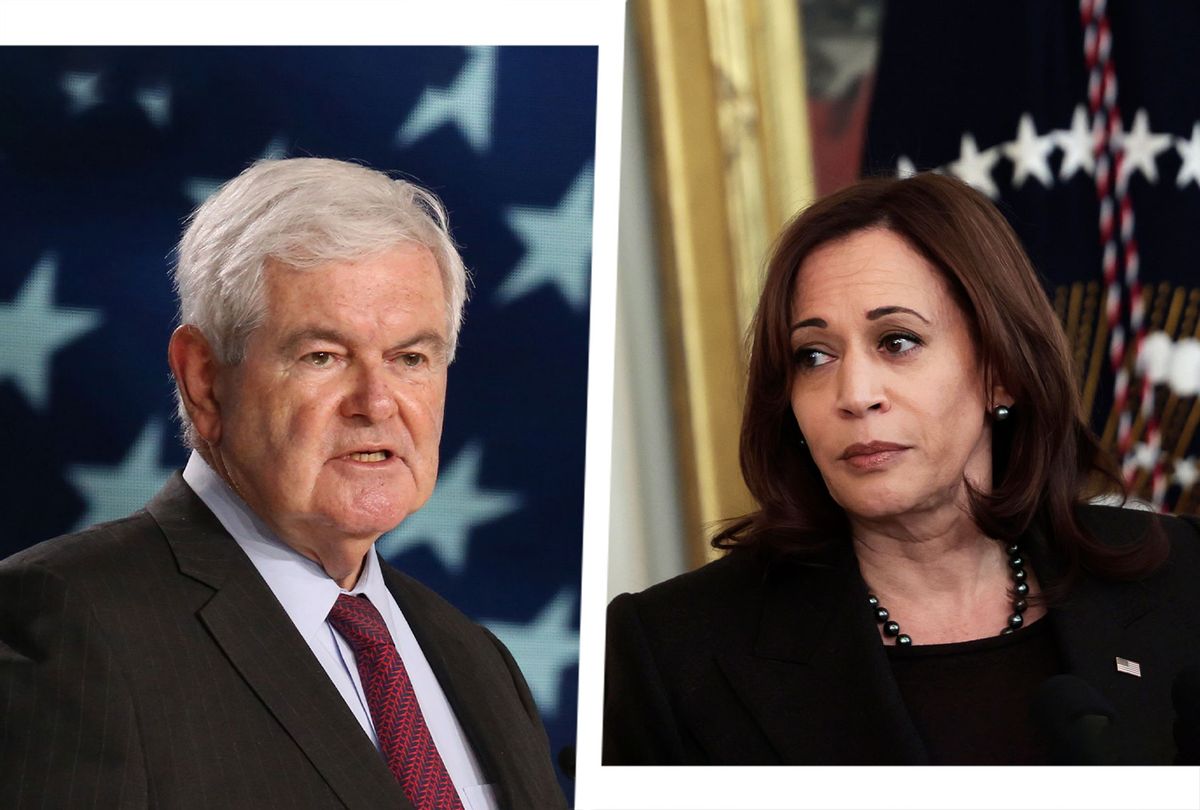 "If you want a strong reason to pray for the health of the president of the United States, you are reminded again today that the reason is the vice president," Gingrich told Fox News host Sean Hannity. "She's not only totally incoherent. He may or may not have cognitive decline problems at his age but at her age, she's just dumb. Let's be clear. Kamala Harris may be the dumbest person ever elected vice president in American history. And that's why people keep resigning."

Gingrich, who served as speaker from 1995 to 1999, specifically remarked on a recent speech Harris delivered in Louisiana, where she announced the rollout of high-speed internet to smaller towns throughout the country. During her address, she repeated the phrase "talking about the significance of the passage of time" on several occasions, leading to some criticism.

The former speaker also made reference to a video in which Harris allegedly laughed off questions around Ukrainian refugees at a press conference with Polish President Andrzej Duda. (The video exchange of the incident, widely shared over social media, was later found to be deceptively edited.)

"I mean, if you were her national security adviser, and you were competent and you'd worked hard, and you knew what you were doing and you watched her in Poland break up laughing when she's asked about Ukrainian refugees, you had to feel a sense of total humiliation," Gingrich continued. "So, I'm not surprised that that particular advisor resigned."

RELATED: Liz Cheney fires back at Newt Gingrich after he suggests throwing Jan. 6 committee in jail

Although Gingrich has been out of office since 1999, the former speaker has not loath to comment on the goings-on of both political parties, often making inflammatory remarks through various conservative outlets.

Back in January, the Republican suggested that members of the January 6 committee investigating the Capitol riot might be thrown in jail over "the kind of laws they're breaking."

"It's basically a lynch mob," he said during a Fox News appearance. "I think when you have a Republican Congress, this is all going to come crashing down."

Gingrich has also promoted the racist conspiracy theory that Democrats are deliberately loosening borders to dilute the electoral power of white Americans.

"The anti-American left would love to drown traditional, classic Americans with as many people as they can who know nothing of American history, nothing of American tradition, nothing of the rule of law," he said last August. "If you go and look at the radical left, this is their ideal model. It's to get rid of the rest of us because we believe in George Washington, or we believe in the Constitution, and you see this behavior over and over again."

RELATED: ​​Newt Gingrich: The left wants "to get rid of the rest of us because we believe in George Washington"

In the past, critics have also questioned Gingrich's mental faculties, a particular point of irony in light of his comments around Harris' intellect.

Back in 2013, Gingrich released a video expressing confusion around the distinction between a computer and a cellphone.

"We're really puzzled," Gingrich said in the video, clutching a small phone. "Here at Gingrich Productions, we've spent weeks figuring out what do you call this? You probably think it's a cellphone."