Liz Cheney fires back at Newt Gingrich after he suggests throwing Jan. 6 committee in jail

"This is what it looks like when the rule of law unravels," tweets Cheney after Newt says "mean" Dems face prison 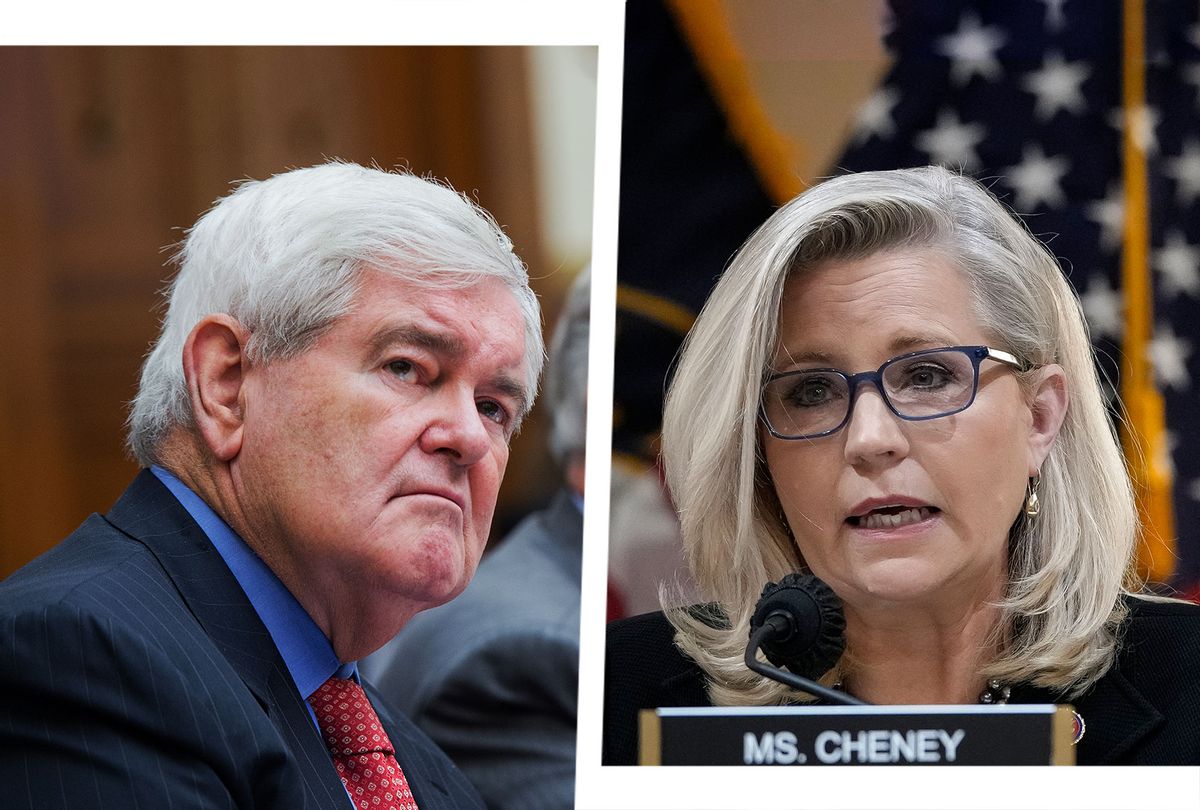 Republicans on the House committee investigating the deadly January 6 Capitol riot hit back at former House Speaker Newt Gingrich, R-Ga., for suggesting that members of the panel may be jailed if Democrats lose the House in the midterms.

Gingrich, who was speaker from 1995 to 1999 and is now advising Republican leadership on midterm campaign strategy, said in an interview with Fox News Sunday that Republicans would seek to take revenge on "mean" and "nasty" members of the committee investigating the Capitol attack.

"I think when you have a Republican Congress, this is all going to come crashing down," he added. "And the wolves are going to find out they are now sheep and they're the ones who are going to face a real risk of, I think, jail for the kind of laws they're breaking."

RELATED: Ted Cruz says GOP will impeach Biden if it retakes Congress — whether it's "justified or not"

The comments came days after the Washington Post reported that Gingrich is advising House Minority Leader Kevin McCarthy on Republican plans for the midterms and the next congressional term, when the GOP is widely expected to win back control of the House. Reps. Jim Jordan, R-Ohio, and Dan Bishop, R-N.C., among others have also floated Republican revenge fantasies targeting the Biden administration after the Jan. 6 committee issued contempt referrals to the Justice Department against former White House chief of staff Mark Meadows and ex-Trump strategist Steve Bannon. Sen. Ted Cruz, R-Texas, even suggested that a Republican House majority might move to impeach President Joe Biden whether it's "justified or not." (There is effectively no possibility that such an impeachment would result in conviction in the Senate: No matter how many seats Republicans win this year, they'll be well short of the required 67.)

"That's why if I'm elected … I'll make sure those who abused their office to target political opponents via the J6 committee are held accountable," he tweeted.

Rep. Liz Cheney, R-Wyo., the vice-chair of the Jan. 6 committee, called out Gingrich's remarks on Twitter.

"A former Speaker of the House is threatening jail time for members of Congress who are investigating the violent January 6 attack on our Capitol and our Constitution," she wrote. "This is what it looks like when the rule of law unravels."

Rep. Zoe Lofgren, D-Calif., one of the Democrats on the committee, called Gingrich's remarks "bizarre."

"I think Newt has really lost it," she told CNN. "You know, it leaves me speechless. I mean, unless he is assuming that the government does get overthrown and there's no system of justice."

"Not all Republicans think things like this, but many do," he said of Gingrich's remarks. "And if the Gingrich/Taylor Greene wing of the party takes over (if they already haven't), then your democracy might be gone."