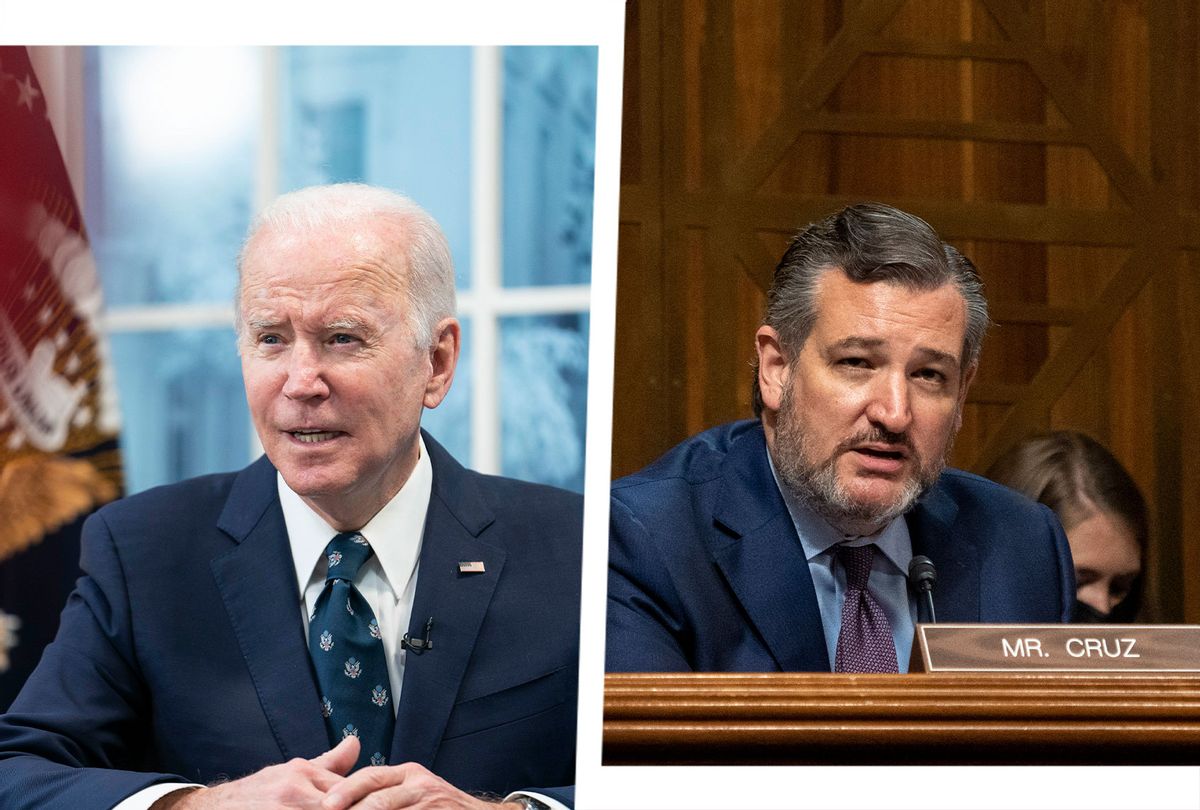 Sen. Ted Cruz, R-Texas, last week predicted that Republicans would impeach President Biden if the party wins control of the House in the 2022 midterms (as is widely expected).

On the latest edition of his "Verdict with Ted Cruz" podcast released last Friday, the senator said he expects House Republicans to retaliate against the Biden administration for the numerous investigations Democrats launched into Donald Trump's scandal-plagued administration.

"If we take the House, which I said is overwhelmingly likely, then I think we will see serious investigations of the Biden administration," Cruz said. He predicted that Republicans may also impeach the president "whether it's justified or not."

"They used it for partisan purposes to go after Trump because they disagreed with him," Cruz said, referring to Democrats. "One of the real disadvantages of doing that, and it is something you and I talked about at great length, the more you weaponize it and turn it into a partisan cudgel, what is good for the goose is good for the gander."

RELATED: Will Republicans really try to impeach Biden? Sure — he's wounded, and they smell blood

Trump is the only president to be impeached twice. Multiple former advisers testified during his first impeachment in 2019 that Trump had withheld aid from Ukraine to force that country's government to launch a spurious investigation into Biden's son Hunter. The Senate, then controlled by Republicans, voted to acquit Trump on both counts of the impeachment, although Sen. Mitt Romney joined all 47 Democrats to vote for conviction on one count. Trump was impeached again last year, shortly after leaving office, on charges of inciting the Jan. 6 Capitol assault. Although 57 senators, including seven Republicans, voted for conviction, that was 10 votes short of the required two-thirds majority.

"I said at the time, when we have a Democratic president and a Republican House, you can expect an impeachment proceeding," Cruz said on the podcast. "That is not how impeachment is meant to work. But I think the Democrats crossed that line."

Cruz claimed that there are "potentially multiple grounds" to consider a Biden impeachment.

"Probably the most compelling is the utter lawlessness of President Biden's refusal to enforce the border," he said, even though Biden has left many of Trump's controversial border policies in place. "That is probably the strongest grounds right now for impeachment, but there may be others," Cruz continued. "Because the Democrats decided this is just another tool in the partisan war chest, I think there is a real risk that this turnabout will be fair play."

Cruz predicted that Republicans have a 90% chance of regaining the House this November. Election analysts generally expect Democrats, who control the House by just a handful of seats, to lose the chamber due to a combination of aggressive Republican gerrymandering, Biden's low approval ratings, the party's unusual 2018 success in red areas during Trump's tenure, and the stalled Democratic agenda in Congress, largely due to resistance from "centrist" senators such as Joe Manchin of West Virginia and Kyrsten Sinema of Arizona.

Even if House Republicans vengefully impeach Biden, Republicans will not have anywhere near the 67 votes required to convict in the Senate. Despite his optimism that the GOP will regain the House, Cruz acknowledged that it will be tougher for the party to regain control of the Senate.

In fact, Republicans are not even waiting for a legitimate chance to impeach Biden. Rep. Bob Gibbs, R-Ohio, and three other House Republicans filed articles of impeachment in September, seeking to remove Biden from office over his border policies, his withdrawal from Afghanistan and his extension of the pandemic eviction ban. Rep. Marjorie Taylor Greene, R-Ga., filed similar articles of impeachment last summer. Rep. Lauren Boebert, R-Colo., went further in September, introducing articles of impeachment against both Biden and Vice President Kamala Harris, accusing them of "giving aid and comfort to America's enemies and colluding with the Taliban" by going through with Trump's plan to withdraw from Afghanistan.