If Republicans win the midterms, they'll impeach Biden to make a mockery of accountability 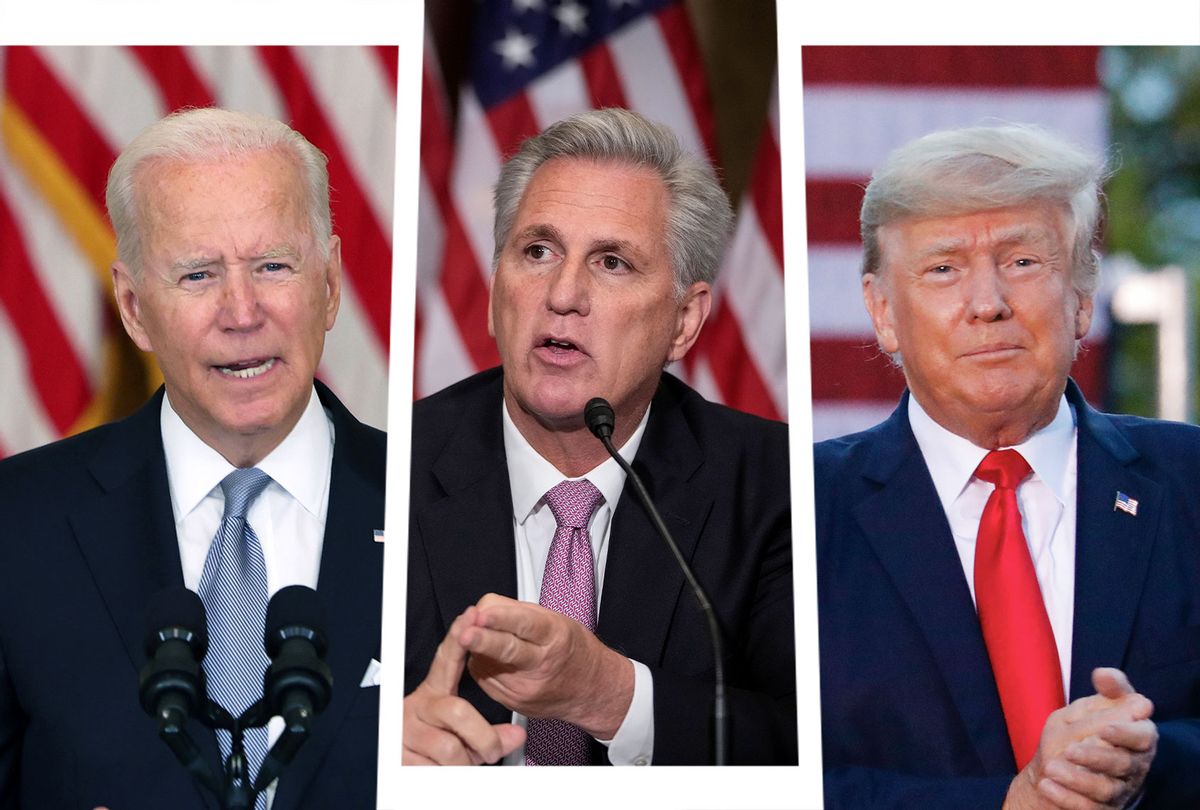 The wheels of the last U.S. military plane were barely off the ground in Afghanistan when Republicans trotted out their plot to impeach President Joe Biden over ending the war.

Using Politico, ground zero for the media pressure campaign to bully Biden into occupying that nation forever, the GOP rushed to concept test the idea of impeaching Biden in 2023. "The I-word looms: McCarthy faces internal pressure to go harder at Biden on Afghanistan," reads Politico's headline the morning after the withdrawal. "Republicans [] want to make a high-stakes call for impeaching Biden over his handling of Afghanistan — a vow that would come due should the GOP take back the chamber next November."

Yep, they want to impeach Biden over Afghanistan. Or impeach him for something, anyway. Not because Biden committed any high crimes or misdemeanors, mind you. Nor even really because of "incompetence," which is a word that is thrown around mainly by people who haven't explained how one is supposed to make losing a 20-year war to the Taliban look prettier on the TV box.

No, it's all about pandering to Donald Trump's rabidly bitter, trollish base, the same people who are so furious about losing the 2020 election they're committing biowar on their own bodies just to hurt the rest of the country for not wanting Dr. Drink Bleach as their president. As Politico's Olivia Beavers writes of congressional Republicans, "their offices were being bombarded with calls from base voters for a future Biden impeachment" even before the full military withdrawal from Afghanistan this week.

What's going on here is not mysterious and, critically, is not about the lost war in Afghanistan, which was lost long before Biden set up camp in the Oval Office. Nope, this is about Trump. When it comes to Republicans, it's always about Trump.

"There's a school of thought in McCarthy's conference that Democrats opened the door to politically motivated impeachment efforts by going after Trump," Beavers writes, quoting an anonymous Republican congressional member claiming, "this is exactly what we said would happen when Democrats weaponized impeachment last time."

Of course, this excuse is just more rationalization and lies. Democrats did not, in any way, "weaponize" impeachment by impeaching Trump twice. On the contrary, Democrats didn't impeach Trump enough.

Trump was only impeached for two crimes: The first was for blackmailing a foreign leader into trying to help him cheat in the 2020 election. The second was for inciting an insurrection on January 6. But the actual number of impeachable offenses committed by Trump was a lot more than that, from his obstruction of justice in the Russia probe to his mainlining foreign bribes through his hotels to abuse of power against the press to tax fraud to campaign fraud, and probably a few more things I'm forgetting. Trump loves crime as much as he loves Diet Coke, and if he could have had a "commit a crime" button on his desk, he would have also been constantly punching it.

So no, the problem is not that Democrats politicized impeachment. It's the opposite: Democrats are so afraid of this "politicization" accusation that they haven't done nearly enough to hold Trump accountable for his criminal behavior. Trump is still walking around, free as a bird, even as the people he compelled to storm the U.S. Capitol are being sent to prison at a steady clip. Considering how much public evidence there is for Trump's criminality, it's hard not to conclude that the Department of Justice's failure to prosecute is less about the law and more about politics. Specifically, there's reason to fear that Attorney General Merrick Garland worries that Republicans will seize on any legitimate prosecution of Trump as an excuse to launch a thousand illegitimate prosecutions against Democrats the next time they control the DOJ.

But, as this talk of impeaching Biden demonstrates, Democratic reluctance to hold Trump accountable has not slowed down the vindictiveness and corruption of Republicans in the slightest.

Republicans claim the mantle of victimhood, no matter what, and if they don't have anything to point to as evidence, they'll just make stuff up. After all, the entire GOP caucus now tacitly endorses Trump's Big Lie that Biden stole the election, without a single shred of even decently faked evidence to support it. All that Democrats bought themselves by being under-zealous about going after Trump was that Trump is now free to run in 2024. Republicans don't really need excuses anymore. Hating Democrats is reason enough.

Beyond pleasing Trump and his base, there's an even deeper reason Republicans will want to impeach Biden the second they seize control of the House: to make a mockery of the very idea of accountability.

Remember, the current GOP plan is to run Trump as their presidential nominee in 2024. If and when that happens, Trump will almost certainly commit a series of crimes, both during the campaign as he attempts to cheat his way to victory, and likely from the White House if he manages to get back there. Betting against that is about as wise as betting against dogs barking and the sun rising in the east.

All Republicans can do, then, is undermine confidence in our systems of justice as much as possible before then. One way to do that is to impeach, perhaps repeatedly, a Democratic president who is clearly innocent of any crimes. Making the impeachment process a joke through shameless kangaroo trials will exhaust the public, and blunt the impact of the word "impeachment." That way, when Trump gets back to campaigning — and therefore back to committing crimes — even the already insufficient accountability tool of impeachment will be substantially weakened.

That's been Trump's strategy from the beginning. He can't convince people he's not corrupt, so instead, he instills the idea that corruption is endemic and therefore unimportant. The rest of the GOP has learned the lesson well, which is why, if they regain the House in 2022, they will likely start impeachment proceedings early in 2023. It probably won't be over Afghanistan — as that will be thoroughly faded from the headlines by then — but Republicans will make up some other B.S. reason. The point is not simply to accuse Biden of crimes but to make accusing someone of crimes a meaningless gesture altogether. That way, when they bring back a real live criminal to office, Democratic outrage will be read by the media as little more than "playing politics" and "both sides do it," instead of as a substantive concern.

It's cynical and anti-democratic to impeach Biden. That's why it's almost certainly the inevitable Republican move if they win the House in 2022.