Is it sensible for the GOP to wage a scorched-earth campaign against Biden? From their point of view, absolutely 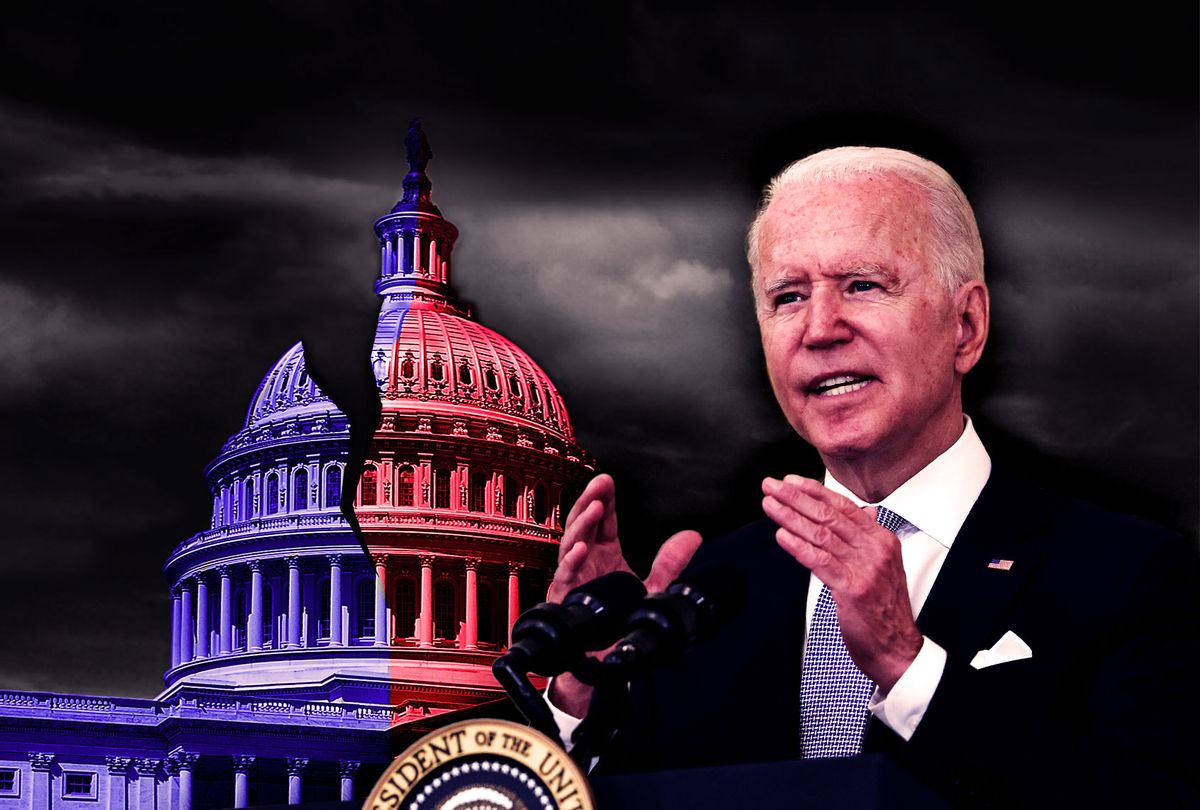 In 2015, I publicly warned that Donald Trump would win the 2016 presidential election. My prediction was dismissed as "crazy" and "hysterical."

At the time, the mainstream news media deemed Trump to be a harmless joke, a political circus act with no hope of winning. Surely the American people would never elect such an incompetent person, a buffoon and professional-wrestling heel to the highest office in the land. Moreover, the mainstream news media and political class convinced themselves that the "serious people" and the "gatekeepers" in the Republican Party would never allow such a thing to happen.

We all know what happened. I and others then warned that Trump was mentally unwell, a fascist and white supremacist who would bring ruin to the United States and vast suffering to the American people. We repeatedly sounded the alarm that Donald Trump was quite likely a traitor to the United States and was in league with hostile foreign powers — either intentionally or through being manipulated as a useful idiot.

We were again slurred as suffering from "Trump derangement syndrome" and exaggerating the dangers that Trump and his regime represented to American democracy and society, somehow for our own personal gain. The political class and the hope-peddlers kept on insisting that the "institutions" were "strong" and that the "rule of law" would shut down Trump and his fascist movement if they went too far.

Once again, our warnings were proven correct. If anything, those who repeatedly sounded the alarm about the existential danger that Donald Trump and his movement represent were too careful and restrained.

During the first years of the Trump regime, no one could have reasonably predicted that the coronavirus plague would sweep across the United States (and the world), leaving more than 600,000 dead (quite likely much more) and the economy in shambles.

Donald Trump's apparent sociopathic and psychopathic behavior are well documented, and now a matter of public record. However, the possibility that he would engage in actual democide against the American people seemed like something out of a science-fiction horror movie, not real life. But as the American people and the world would learn, there are few if any limits to Trump and his agents' appetite for destruction.

Pro-democracy voices and other patriots repeatedly warned that Trump would attempt a coup in order to remain in power. Again, the professional smart people and others invested in "normalcy" dismissed such warnings. In their collective mind, because America was a "democracy" that had always seen an orderly transfer of power between administrations, it would always remain so. On Jan. 6 of this year, they and the world learned that fictions and fables of American exceptionalism offer no real protection against the rising tide of neofascism. Some eight months later, the Trump movement's coup against democracy continues.

Democrats have been unable to marshal an adequate defense, and are at dire risk of being routed without even putting up a fight. Which leads to one more warning and prediction. The Trump-controlled Republican Party will in all likelihood impeach President Joe Biden if they win control of the House of Representatives in the 2022 midterm elections. They will not be able to convict Biden in the Senate and remove him from office — just as Democrats were unable to convict Trump — but that's largely beside the point.

There are many conditional qualifiers to that prediction, but given the Republican Party's escalating embrace of fascism, Biden's impeachment is more likely than not. I do not possess superpowers such as the ability to see the future, nor am I a time traveler. I am a working-class Black American, with all the challenges, burdens, responsibilities, varied experiences, cultural memory and insights that come with that identity.

What I possess, however, is a willingness to accept the evidence and what it reveals about the health of American democracy. I am also not hobbled by a faith in American exceptionalism or a belief that democracy is inherent to this country and will endure forever. I am also not so naïve as to believe that America's democratic experiment is destined to end positively — in reality, America's multiracial democracy is very much a work in progress.

Some evidence in support of my prediction:

Today's Republican Party and right-wing echo chamber are obvious and transparent with their intentions. That Joe Biden will and should be impeached is now a given within various parts of the right-wing propaganda machine, which is a closed epistemology and alternate reality. Trump's political cult members, of course, believe it is real. Their collective delusion is powerful.

About one in four Republicans support the Jan. 6 attack on the Capitol, while 50 percent of Republicans and Trump supporters believe that the Capitol attackers were "patriots" whose cause was "defending freedom."

A significant percentage of Republicans — especially Trump supporters — are authoritarians who are willing to overthrow America's multiracial democracy if white people are no longer the dominant group. Today's Republican Party is effectively a white identity cult. The "independent" voters much loved by the media and discussed by the pundit class largely lean to the right and support Trump and the Republicans.

Approximately 70 percent of Republicans believe in Trump's "Big Lie" that the 2020 presidential election was stolen by Biden, the Democrats and sinister foreign forces.

Over the last few decades, the Republican Party, the larger "conservative" movement and the right-wing disinformation machine have programmed their followers to believe that the Democratic Party is illegitimate and does not reflect "real American" values. As seen in the ongoing coup against American democracy, the Age of Trump has made such views even more extreme and dangerous. We have entered a period when any election won by a Democrat will be deemed "stolen" or "illegitimate" by imaginary fraud. Results will then need to be "recounted" or otherwise nullified, with a Republican put in office by whatever quasi-legal means may be available.

Today's Trump-controlled Republican Party and the larger neofascist movement have rejected normal politics and any commitment to the common good, compromise and a belief in shared democratic values, norms and traditions. As part of this belief system, right-wing terrorism and other forms of political violence are now viewed as an acceptable means of obtaining and keeping political and social power.

Inspired by Trump and his regime, today's Republican Party and "movement conservatism" operates more like a political crime family than a "mainstream" political party. Ultimately, because Trump was impeached (twice) Joe Biden must now be impeached in retaliation.

During a televised interview with Steve Bannon earlier this week, former Trump attorney Rudy Giuliani was asked about the possibility of impeaching Biden over his handling of the U.S. withdrawal from Afghanistan.

"I would rather not have an impeachment," Giuliani said. "However, I think we're dealing with a situation that just because the Democrats misused it, we can't be denied the use of it when something is seriously harmful to the United States. I think you have to do it. … This is serious enough so that an American president who — maybe he's doing it because he's mentally incompetent, but we don't know that. And then he can defend himself that way."

Last Wednesday at an event in Pikeville, Kentucky, Senate Minority Leader Mitch McConnell essentially ducked a similar question about Biden and Afghanistan. "I think the way these behaviors get adjusted in this country is at the ballot box," he said. "The president is not going to be removed from office with a Democratic House and a narrowly Democratic Senate. That's not going to happen."

Notice that McConnell's did not say that Biden has committed no crimes meriting impeachment. Instead, he spoke in the plain language of realpolitik. If McConnell deems it politically advantageous he will no doubt approve an impeachment of Biden.

Gregory Wallance writes at The Hill that "a remarkably broad range of Republicans," from Marjorie Taylor Greene to Lindsey Graham, "are turning the Constitution's impeachment clause into a negative branding howitzer aimed at the White House":

Under total war rules, it's irrelevant that Biden did not commit an impeachable offense, unlike Trump, who committed two, first by pressuring a foreign ally to intervene in his favor in the 2020 election and then, when he lost, by inciting an insurrection to block confirmation of his opponent's victory. Biden stands accused by Republican impeachment-mongers not of undermining the Constitution but of mismanaging a military engagement. …

Having set their base in motion with "Impeach Joe Biden" demands, Republicans may have created an unstoppable dynamic. Republican congressional offices are already besieged with demands for a Biden impeachment. By next spring, Republicans in primary fights may be booed off campaign stages unless they pledge to impeach Biden if the House changes hands.

Donald Trump will either be the 2024 Republican presidential nominee or play the role of kingmaker. Impeaching Joe Biden will be a way of further weakening the Democratic Party by forcing it to fight on multiple fronts, making it easier prey for Republicans and the larger neofascist movement. Moreover, a Biden impeachment will excite Donald Trump's worst impulses, and those of his followers, who will likely engage in more acts of political violence against their perceived enemies. In the end, the events of Jan. 6 may merely have been a preview for what lies ahead.

To this point, the Democratic Party and its leaders have not shown the necessary heart or spirit or urgency to defeat the Jim Crow Republicans and the neofascist insurgency. Unless that trend changes, the Democrats — and the American people as a whole — will lose everything.