"The cases we documented amount to unspeakable, deliberate cruelty and violence against Ukrainian civilians." 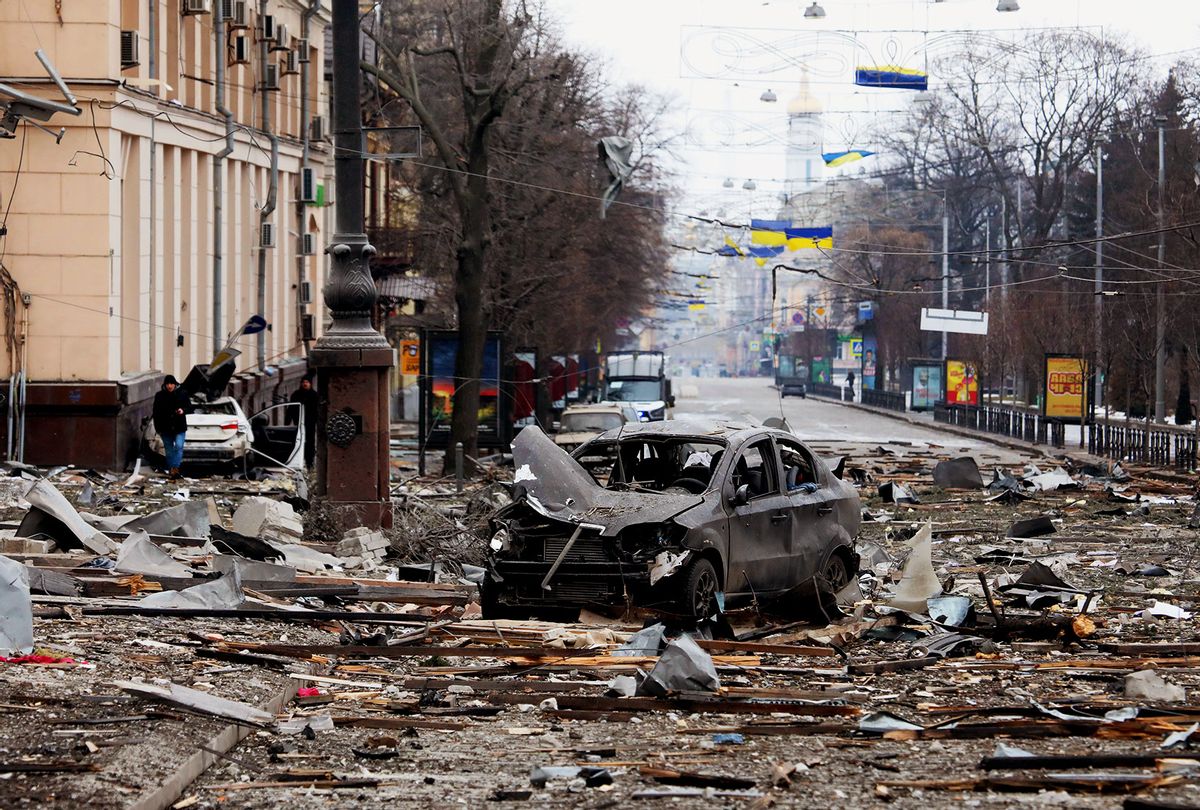 A burnt-out car is seen on the street after a missile launched by Russian invaders hit near the Kharkiv Regional State Administration building in Svobody (Freedom) Square) at approximately 8 am local time on Tuesday, March 1, Kharkiv, northeastern Ukraine. (Vyacheslav Madiyevskyy/ Ukrinform/Future Publishing via Getty Images)
--

A leading human rights group said Sunday that it has documented multiple instances of Russian forces violating the laws of war in its ongoing invasion of Ukraine including by raping and executing citizens.

"Rape, murder, and other violent acts against people in the Russian forces' custody should be investigated as war crimes," he said.

The latest accusations of violations of international humanitarian law to hit Russian President Vladimir Putin's military forces involve events in the Chernihiv, Kharkiv, and Kyiv areas when they were under Russian control. The latter area includes Bucha, where, according to HRW, Russian forces "rounded up five men and summarily executed one of them" and where photos that emerged this weekend showed apparent civilian corpses on streets.

HRW's report is based on photographic evidence and interviews with residents, victims, and witnesses to alleged crimes that took place February 27-March 14.

The events in the report include the repeated rape and physical assault of a 31-year-old woman in the Kharkiv region village of Malaya Rohan by a Russian soldier in a school where she and her family had been sheltering.

In a separate incident, in the village of Staryi Bykiv in the Chernihiv region, Russian soldiers went door to door and took six men from three families, according to witnesses. The soldiers shot the men dead.

Ukrainians who talked with the rights group also said that Russian forces had taken key supplies from them including food, gasoline, and clothing.

"Commanders," added Williamson, "should recognize that a failure to take action against murder and rape may make them personally responsible for war crimes as a matter of command responsibility."

HRW also said last week that video that appears to show Ukrainian forces near Kkarkiv abusing Russian POWs, including shooting them in the legs, warrants an investigation and, if confirmed, would amount to war crimes.

Another leading rights group, Amnesty International, said last week following an on-the-ground investigation that Russian forces were engaging in "siege tactics" in its assault on Ukraine through which they are unlawfully killing civilians.