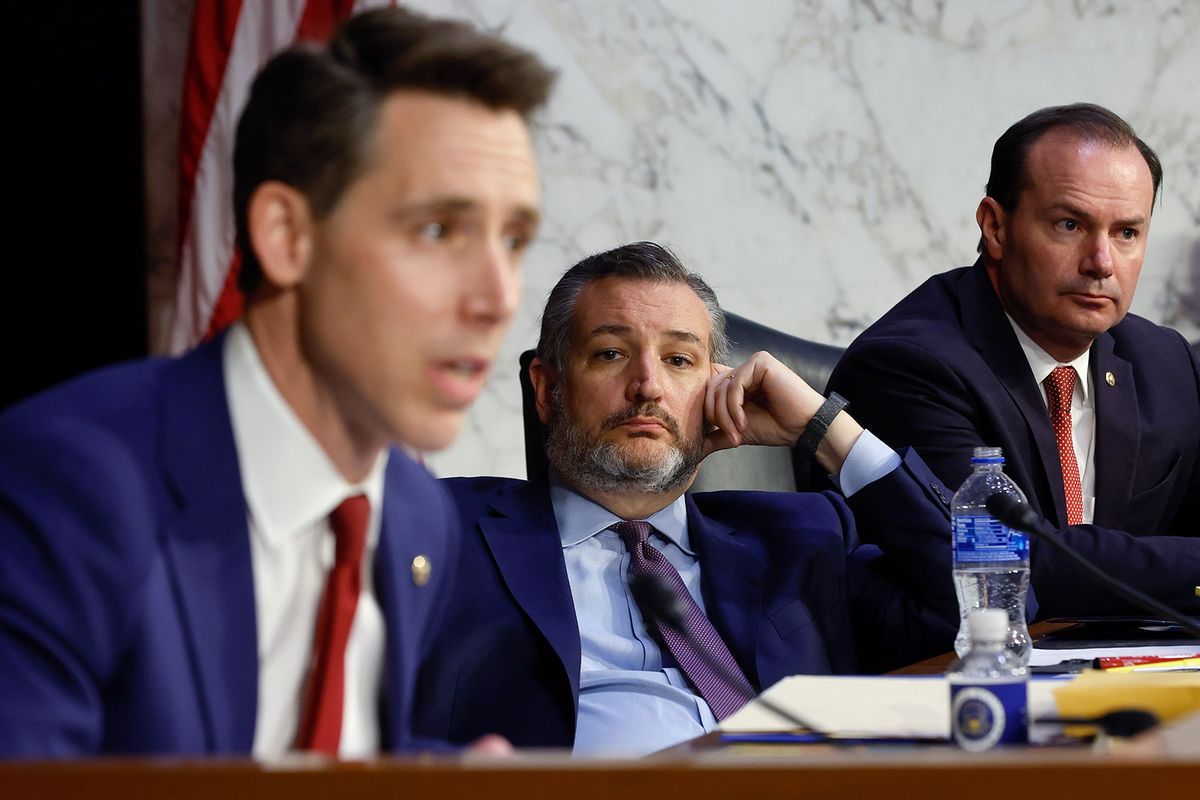 With Democratic Sen. Joe Manchin of West Virginia and Republican Sen. Susan Collins of Maine — both key swing votes — having said they will vote for her, Judge Ketanji Brown Jackson appears likely to be confirmed to the U.S. Supreme Court. But most GOP senators are likely to vote against her, and far-right extremists like Sen. Ted Cruz of Texas, Sen. Josh Hawley of Missouri and Sen. Marsha Blackburn of Tennessee have been angrily railing against President Joe Biden's nominee — which, journalist Eleanor Clift argues in an op-ed published by the Daily Beast on April 4, may come back to haunt them in the future.

"Judge Ketanji Brown Jackson was already held in favorable regard by the American public before the Supreme Court nominee sat for Senate confirmation hearings," Clift explains. "But her popularity grew even more after the hearings, thanks to a tag team of Republicans who sought to portray her as soft on child pornography criminals, uncertain about the definition of a woman, and a fan of critical race theory."

Clift continues, "Prior to the hearings, Judge Jackson held a 58% approval rating in a Gallup poll. And after nearly 24 hours of answering questions over two days, the percentage of respondents who said that they would vote for her if they were senators rose from 64% to 72% in a Marquette Law School national survey."

"Support for Jackson in the Marquette poll among Black adults currently sits at 86%; among Hispanics it's 76%, and among Whites, it's 59% — easily making her the most popular Supreme Court nominee since John Roberts was elevated to Chief Justice in 2005," Clift observes. "Yet, with few exceptions, nearly half the Senate is poised to vote against her history-making confirmation — exposing a disconnect with the broader sentiment in the country. This could very well come back to bite the GOP come election time."

The long list of Republicans senators who have said they plan to vote against confirming Jackson include not only Cruz, Hawley and Blackburn, but also, Sen. Richard Burr of North Carolina, Sen. James Inhofe of Oklahoma, Sen. Lindsey Graham of South Carolina, Sen. Marco Rubio of Florida, Sen. Ben Sasse of Nebraska and Senate Minority Leader Mitch McConnell, among others.

"It was big news when Republican Sen. Susan Collins of Maine said she would support Jackson," Clift notes. "Collins has voted for every SCOTUS nominee since her election to the Senate in 1996, with one exception: She opposed Amy Coney Barrett's rushed nomination a week before the 2020 election on procedural grounds — a vote that was popular in Maine."

Republican senators who are trumpeting their plans to vote against Jackson, Clift argues, are being "performative" — not making a decision based on policy.

Clift writes, "The only rationale for the GOP's blanket opposition to a well-qualified nominee with exceptional judicial temperament is the fear of being primaried and the primal need to lock down the Trump voters…. We probably won't remember the names of the Republicans who performatively voted against the eminently qualified Judge Jackson's confirmation. But 30 years from now, we will be talking about the first Black woman on the Court, her record, her rulings, and how she opened the door for others to follow."