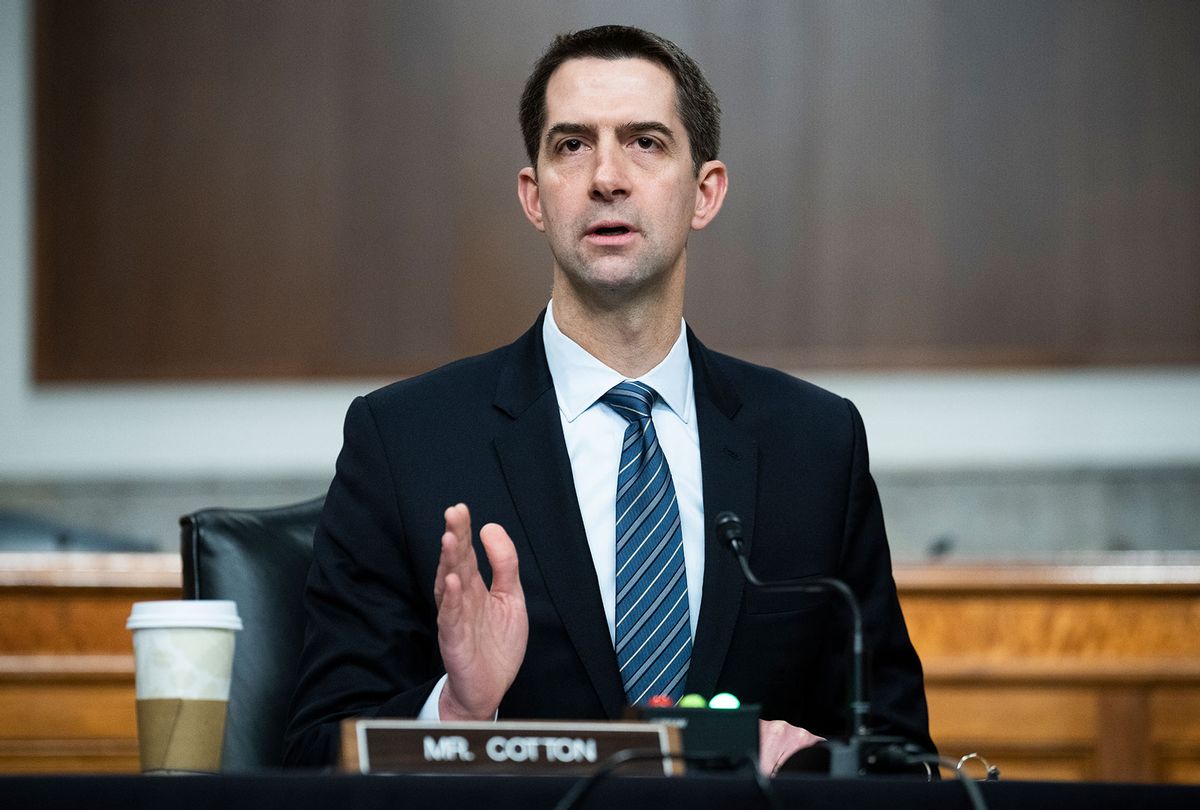 "Tom Cotton is the lowest of the low," Democratic National Committee Chairman Jaime Harrison told the hosts of MSNBC's "Morning Joe" on Wednesday. Angered by the Republican senator's suggestion that Ketanji Brown Jackson, who is set to be confirmed to the Supreme Court this week, "might have" defended the Nazis during the Nuremberg trials, Harrison called Cotton a "little maggot-infested man."

"You know the last Judge Jackson left the Supreme Court to go to Nuremberg and prosecute the Nazis," Cotton, a Republican from Arkansas, said on Tuesday, referring to Justice Robert Jackson, who was appointed in the 1940s. "This Judge Jackson may have gone there to defend them."

Cotton's outlandish remark was just one of many in a series of disparaging attacks against the liberal appointee during his Senate floor speech on Tuesday.

In particular, the Arkansas Republican blasted Jackson for her work as a public defender, which at one point involved defending four suspected terrorists in Guantanamo Bay.

"Judge Jackson has also shown real interest in helping terrorists," Cotton stated, omitting the fact that she was assigned this case.

But as Jackson explained during her confirmation hearings last month, "federal public defenders do not get to pick their clients," noting that the right to representation is a "core constitutional value."

RELATED: Sen. Tom Cotton campaigned on his "experience as an Army Ranger" — but he didn't have any

Cotton's comments were widely criticized by Democrats and Jewish organizations, some of whom suggested that his rhetoric echoed that of past dictators.

"@SenTomCotton is [sic] proposing is that criminal defendants should not have legal representation," tweeted Rep. Eric Swalwell, D-Calif. "The government would prosecute without an adversarial system testing its burden of proof. Cotton's preferred system of justice is exactly the type of justice meted out by dictators."

"The fact that a brilliant black woman is going to be a Supreme Court judge offends him so much that he doesn't even realize he just came out against due process," echoed Rep. Ilhan Omar, D-Minn. "What a joke."

"To use a Nazi analogy as some sort of twisted way to attack Judge Ketanji Brown Jackson is reprehensible," the group said. "We've said it a thousand times and we'll say it again: stop trivializing the Holocaust for political gain."

RELATED: Journalist warns "performative" attacks on Ketanji Brown Jackson may "come back to bite the GOP"