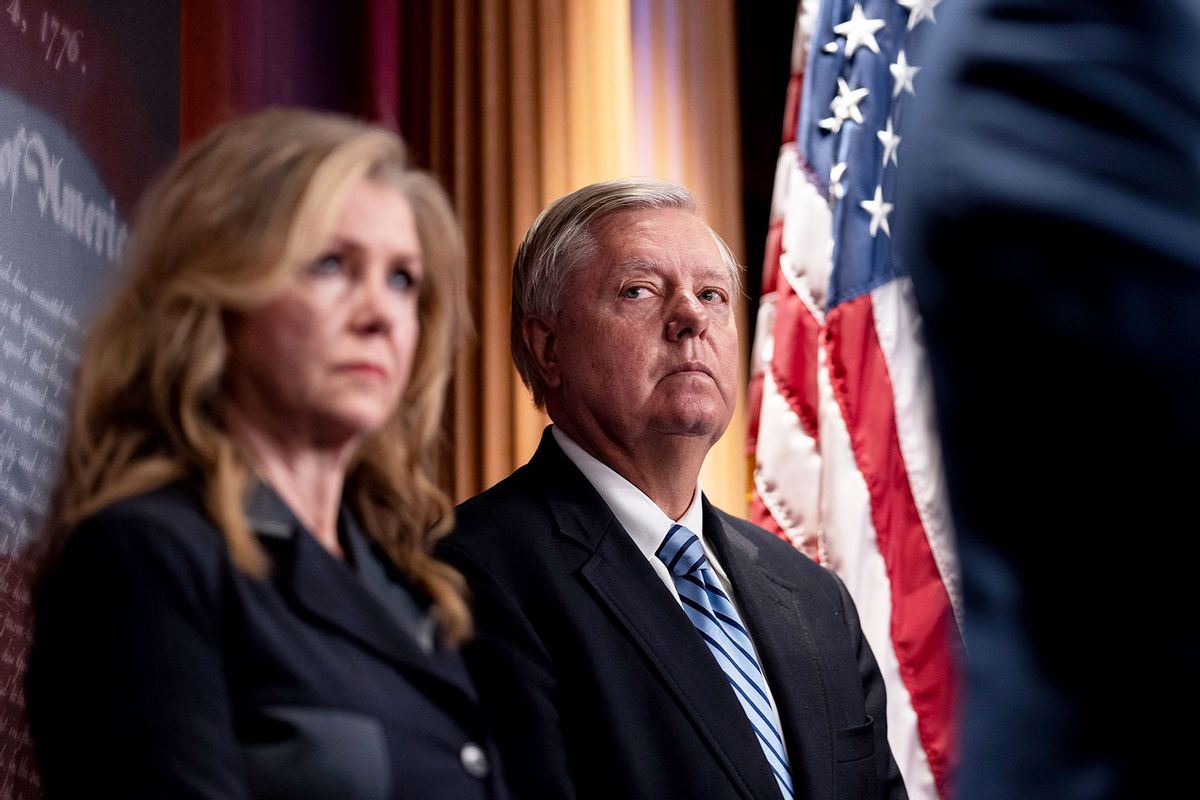 Angrily parroting other Republicans, Graham attacked Jackson as she outlined her concerns with the federal sentencing guidelines for child pornography possession and distribution. When Jackson explained that the guidelines could result in 50 years of confinement for 15 minutes spent on a computer, Graham shot back, "Good! Good. Absolutely, good. I hope you go to jail for 50 years if you are on the Internet trolling for images of children…"

Graham announced he would vote against Jackson's confirmation in part because of "her flawed sentencing methodology regarding child pornography cases." On the morning of the Senate's historic vote on Jackson's nomination, Graham joined other Republicans in a press conference to again complain about her sentencing record for child pornography convictions. He followed up by casting a no vote from a cloakroom instead of the Senate floor.

But is Graham truly concerned about perceived light child pornography sentences, or was this just manufactured outrage? It is a valid question, because his record on oversight of the military justice system tells a completely different story. Graham has tremendous influence over the military's criminal justice system: He was an integral part of it as an Air Force uniformed lawyer with more than 30 years serving as a judge advocate, and he has also long served in Congress, including time on the Senate Armed Services Committee.

An examination of Graham's Air Force service, which included time as prosecutor and appellate judge, demonstrates that he maintained close ties with the most senior members of the Air Force Judge Advocate General Corps. That's important because one would therefore expect Graham to be intimately aware of how the military punishes child pornography offenders, in particular those in the Air Force. One would also expect that if Graham did not like the comparatively short sentences such offenders receive in the military (which are typically much lighter than the ones handed down by Judge Jackson), he would have done something about it — for example, propose legislation to create mandatory minimums for those convicted of child pornography in the military. He did not.

The federal system has used sentencing guidelines for the last 35 years, but the military has no such guidelines. And while Congress has finally mandated using sentencing parameters in the military, they won't go into effect for another two years. Moreover, like almost all crimes in the military, child pornography offenses have no minimum sentencing requirements and include "no punishment" as an authorized sentence for even the production of child pornography. And, contrary to the federal system, no detailed pre-sentencing report is provided to a judge in military cases. Such reports are critical for judges in determining the severity of an offense and the recidivism risk of defendants.

As a result of these procedural deficiencies — ones that Graham could have worked to fix — military sentences skew extremely light. For example, a review of the Air Force's court-martial results since January 2021 show the average airman received less than 10 months for possession of child pornography, with one offender receiving only 30 days of confinement, a far cry from the 50 years Graham claims is appropriate. Indeed, Judge Jackson would be viewed as a draconian "hammer" in the institution where Graham served for 30 years.

The military's kid-gloves sentencing is compounded by the fact that military judges do not have the supervised release tools possessed by federal judges. For example, like all federal judges, Jackson had (and used) the authority to subject offenders to lengthy conditions after being released from prison, including sex offender treatment; restrictions on accessing the internet; monitoring of computer devices and smart phones; and no-notice searches. These measures are, of course, designed to reduce recidivism. In contrast, after a military offender has served their court-martial sentence, they are subject to no such restrictions. When a military offender is released from jail, there is nothing stopping them from going right back to searching for more child pornography. This is particularly troubling, as one expert has estimated that military veterans are four times more likely to be convicted for child pornography charges or sexual offenses against children than those who have never served.

One need look no further than two cases involving Air Force colonels to see how much lighter the military treats child pornography than normally occurs in the civilian realm. Both colonels were caught with thousands of images of child pornography, but one was investigated and prosecuted by the Air Force, and the other by the federal justice system. The officer prosecuted by the Air Force was sentenced to only one year of confinement. The one sentenced by a federal judge received five years, followed by 15 additional years of supervised release. In other words, the federal system produced a sentence five times more severe than the military's.

What has Lindsey Graham done to address how leniently the military sentences child pornography offenders? Less than nothing — he has fought against military justice reform, using his years of service as justification.

What has Sen. Graham done, then, to address how leniently the military sentences child pornography offenders? Has he proposed eliminating the "no punishment" sentencing option, imposing mandatory minimum sentences for child pornography offenses, authorizing the use of pre-sentencing reports, or giving military judges the same authority to place conditions on offenders after they have served their sentences? Has he either publicly or privately berated military leadership or military judges for light child pornography offenses? No. Instead, Graham has forcefully fought military justice reform, and worked to undermine his Senate colleagues who have sought such needed reform of the military justice system — often by using his years of service as a military lawyer to justify his opposition.

Col. Don Christensen (ret.) is the former chief prosecutor of the U.S. Air Force and president of Protect Our Defenders, the pre-eminent national human rights organization dedicated to ending sexual violence, victim retaliation, misogyny, sexual prejudice and racism in the military and combating a culture that has allowed it to persist.