With their QAnon circus as cover, Republicans covertly unveil plans to undo decades of settled law 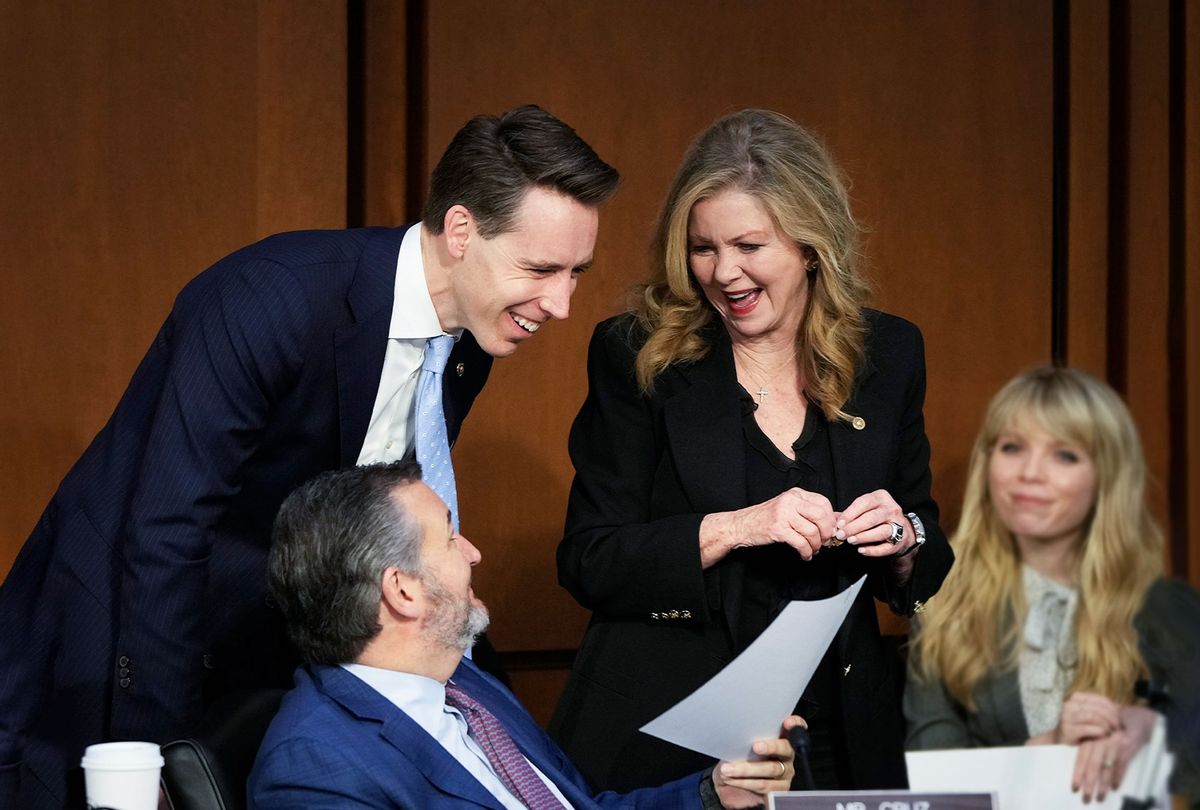 At the beginning of the confirmation hearing for Ketanji Brown Jackson, the first Black woman nominated to the Supreme Court, Sen. Lindsey Graham of South Carolina promised that Republicans wouldn't turn the whole thing into "a circus."

Spoiler alert: He was lying.

It wasn't long before the clown car doors opened and every flavor of right-wing idiocy came pouring out. The main attack line was openly stoking QAnon conspiracy theories by repeatedly floating false and truly basement-dwelling accusations that Jackson has some special sympathy for child molesters. There was a train wreck of rape apology, complete with calling an alleged attempted rape "teenage dating habits." Graham, auditioning as usual for "Real Housewives," threw not just one, but two storming-out-of-the-room tantrums. And there was the racism, so much endless, painful racism.

The clown show worked as intended. It garnered attention from cable news and social media, earned accolades from Fox News hosts and likely drove Republican voters to seek out conspiracy theories like QAnon. Sen. Ted Cruz of Texas was even spotted checking his Twitter mentions after what he clearly thought was a dramatic performance. It's cynical and would be laughable if it weren't all in the service of stoking bigotry and further radicalizing the Republican base.

Things get even uglier, however, when one looks past the clown show at some of the other, more covert signals that the Republican senators were sending, especially to the religious right that continues to be the backbone of the GOP. Several Republicans used this moment of focus on the Supreme Court to wink at plans to roll back not just abortion rights, but legal contraception, same-sex marriage, and even interracial marriage. While the QAnon clowns were honking their noses and yelling about "racist babies," the party sent a subtler but strong message to its hardcore, Christian nationalist base: Yes, we intend to use the courts to roll back 70 years of progress.

One Republican senator, Mike Braun of Indiana, did screw up the mission of avoiding headlines by being too blunt about his willingness to re-criminalize interracial marriage. He was giving an interview to local press about the Jackson hearings and asserting the baseless GOP faith in "states rights" when Braun argued that 1967's Loving v. Virginia was wrongly decided. Unfortunately for him, the reporter had the wherewithal to ask clearly and concisely, "You would be okay with the Supreme Court leaving the issue of interracial marriage to the states?," to which Braun answered, "Yes."

Typically, Republicans know to speak about these things in code. They usually couch their arguments in dense and often fake legalese and refer to the names of court cases while evading what they were actually about. Braun's straightforward answer, however, drew unwanted headlines. Braun did try to walk it back, by pretending he misunderstood the question. But, of course, he did not because the reporter had the wits to reframe the issue in plain English.

In the same interview, Braun also came out for ending the legal right to use contraception, though this time, he evaded the damning headlines by burying his opinion in technical-sounding nonsense about how "we're better off having states manifest their points of view rather than homogenizing it across the country." This obtuse language is designed to speak to the religious right base while causing everyone else's eyes to glaze over.

Underneath the fake legalese is a very clear ideology, however, one that is dominant — and near-absolute — in the GOP: opposition to the equal rights of women, LGBTQ people and people of color.

It's not just Roe v. Wade and abortion rights they're gunning for. All the blather about "religious rights" and "states rights" is about a fundamental opposition to the concept of human rights. Republicans were very much using this hearing as an opportunity to let their religious right base know that now that they have six members on the court, they aren't going to just stop at overturning Roe. They're coming for everything.

Over the weekend, Sen. Marsha Blackburn of Tennessee released a video asserting, falsely, that Griswold v. Connecticut is "constitutionally unsound." That's the 1965 court ruling that legalized contraception and has been quietly opposed by the same Republican activists that have spent decades trying to overturn Roe. Part of the reason they hate Griswold is it established the right to privacy, which was later employed to legalize abortion, end bans on gay sex, and legalize same-sex marriage — all decisions the religious right opposes. But the religious right also just hates contraception and wants to make that harder to get.

That may sound preposterous in a nation where over 99% of sexually active women have used birth control. But Republicans have been quietly waging war on contraception for over a decade now, and have even secured at least one decision at the Supreme Court to strip women of birth control coverage in their insurance plans. The Trump administration repeatedly tried to take away people's birth control, by attacking both insurance coverage for birth control and terminating federal funding programs to provide it to lower-income patients. (President Joe Biden has fixed a lot of the damage.) While they mostly try to keep it out of mainstream headlines, the religious right has long argued that the "contraceptive mentality" makes women sexually loose and prone to abortion, and the only way to stop it is to end legal access to contraception.

And, just like every other decision that flowed from Griswold, Republicans are also coming for Obergefell v. Hodges, the 2015 decision that legalized same-sex marriage.

While his fellow Texas senator Cruz was raving about "racist babies," Sen. John Cornyn used his time during Jackson's hearing to quietly signal the legal approach Republicans are drafting to end marriage equality. He claimed legal same-sex marriage is "a dramatic departure from previous laws" and complained that same-sex couples have "a new right" (heaven forbid!). He then compared Obergefell to Dred Scott, the infamous 1857 Supreme Court decision that affirmed legal slavery. He argued that those who "hold traditional beliefs on something as important as marriage" are being oppressed by having to live in the same communities as same-sex couples. Other Republican senators, such as Ben Sasse of Nebraska and Sen. John Kennedy of Louisiana, picked up the baton, using legalese-drenched arguments about "substantive due process" and "new rights" to covertly argue that Obergefell should be overturned.

Cornyn felt safe enough that he was evading mainstream attention that he wasn't even particularly coy about it. He literally told Jackson the Constitution doesn't protect the right to marry. As legal expert Mark Joseph Stern of Slate noted, once the Supreme Court overturns Roe, as it's expected to do in June, it  "will leave Obergefell hanging by a thread." And not just Obergefell, either. "A number of major decisions protecting reproductive rights, including access to contraception, will be imperiled" by the legal reasoning that Cornyn was alluding to, including, Stern notes, the right to interracial marriage.

Indeed, as legal expert Jessica Mason Pieklo of Rewire News noted on Twitter, Cornyn also insisted that marriage is "religious," hinting at a longstanding religious right dream of ending the concept of secular marriage altogether. It's not just interracial couples and same-sex couples, but anyone who didn't get married in a church is now the target.

Republicans speak of these plans in pseudo-legal jargon and elliptical phrases because they know their agenda is radical and unpopular, often even with a good chunk of their own voters. But the anticipated overturn of Roe in June has clearly got the GOP leadership giddy about how much more of the past 70 years of progress they can undo with their 6-3 majority at the Supreme Court. After all, banning abortion is also very unpopular, but Republicans reasonably believe they can get it done without losing power.

The same Supreme Court that they're going to use to overturn the right to marry and control your fertility has also been chipping steadily away at voting rights, putting the Republican grip on power firmly out of the hands of voters. Since they can't be punished for it at the ballot box, what's to stop Republicans from not just ending abortion rights but all of those other popular human rights they've hated for so long?