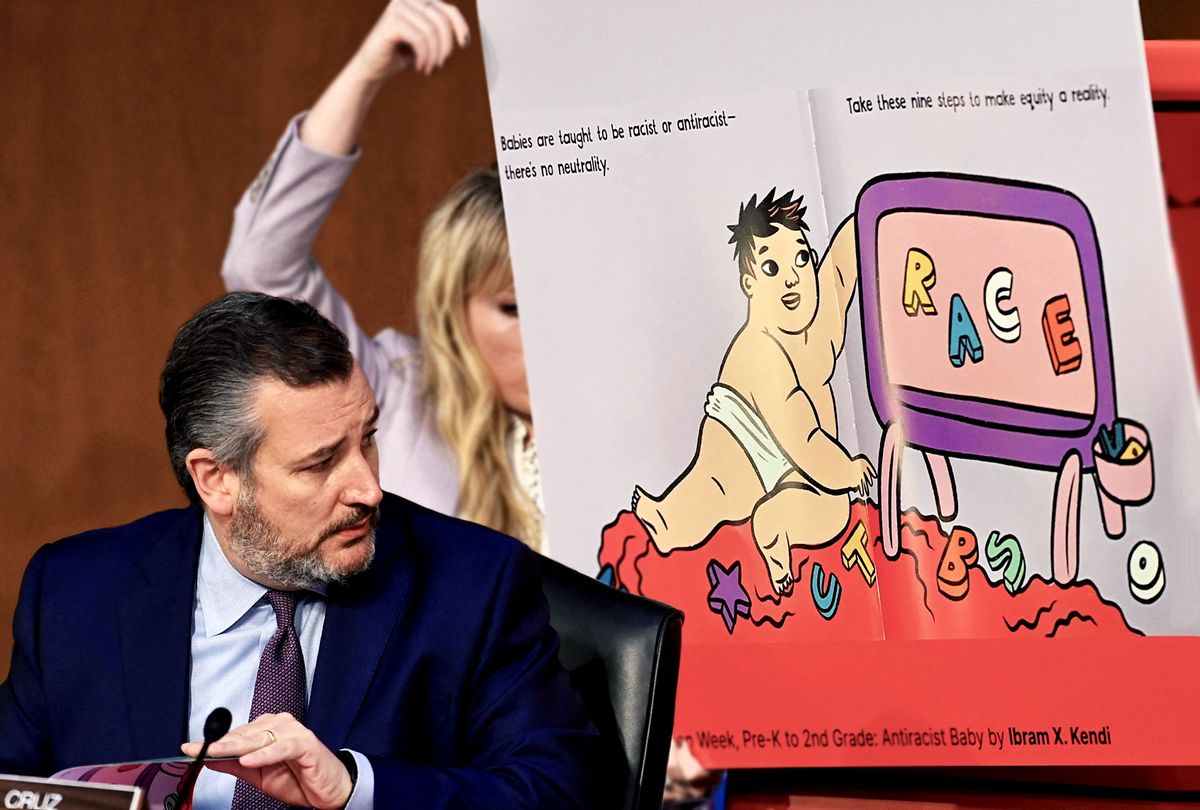 US Senator Ted Cruz (R-TX) looks to a display of a children's book on race while speaking during the confirmation hearing for Judge Ketanji Brown Jackson before the Senate Judiciary Committee on her nomination to be an Associate Justice on the US Supreme Court, in the Hart Senate Office Building on Capitol Hill in Washington, DC, on March 22, 2022. (Photo illustration by Salon/SAUL LOEB/AFP via Getty Images)
--

During Tuesday's Senate hearing to confirm Judge Ketanji Brown Jackson to the Supreme Court, Sen. Ted Cruz, R-Tex., provided yet another reminder that his true talent as a troll lies in how shameless he is.

Certainly aware that by getting "racist babies" in headlines, people would assume he's talking about himself, Cruz forged ahead, indifferent to the inevitable jokes, just focused on getting that sweet, sweet attention. The immediately infamous "racist babies" exchange, of course, had nothing to do with the actual job Jackson is nominated for. Instead, Cruz used his allotted questioning time to freak out over "critical race theory," which is the trendy scare term in right-wing circles to demonize basic concepts like "racism is bad" and "racism is real." So Cruz ginned up the outraged over a book called "Antiracist Baby."

"Do you agree with this book that is being taught with kids that babies are racist?" Cruz raved, because, as part of their efforts to break the English language, Republicans now call it "racist" to teach kids not to be racist.

RELATED: Elie Mystal: Our Constitution is "actually trash" — but the Supreme Court can be fixed

To her eternal credit, Jackson did not retort that the only racist baby she could see was the junior senator from Texas. Instead, she reminded Cruz that random children's books "don't come up as my work as a judge." She did, however, being a flesh-and-blood human, release a teeny but audible sigh over his childish display. It was enough for the New York Times, desperate for any crack in Jackson's placid demeanor, to run with "Cruz and Jackson spar over antiracism curriculum at a private school," rewarding Cruz's idiocy with the fireworks-style coverage he craves.

In reality, Jackson was no more "sparring" with Cruz than I'm "sparring" with a loud and persistent car alarm going off on my block. "Enduring" would be the more accurate description.

Jackson is the first Black woman ever nominated for the Supreme Court, and any hopes that Republicans would be respectful of this historic moment were thoroughly dashed this week. Instead, the nation is bearing witness — or in many cases, looking away in pained embarrassment — as Republicans have a lengthy, racist tantrum instead. It's enough to make one wish they all had a copy of "Antiracist Baby," as it's the kind of remedial picture book they clearly need. Too bad none of them would read it.

Seriously, it got so bad that Sen. Mike Braun of Indiana let slip that he would be cool with letting states ban interracial marriage, under the guise of "states rights." He was responding to Jackon's nomination with an extended tear about his — entirely false — belief that the Supreme Court was wrong in the past to prioritize federal protections for human rights over "states rights." A reporter asked him if this belief also applied to Loving v. Virginia, the ruling that blocked states from banning interracial marriage. Braun said yes, extolling "the beauty of the system" that "states ought to express themselves." In this case, the "beauty" would be in arresting people for interracial marriage.

Braun backtracked a few hours later, claiming, "I misunderstood a line of questioning." This excuse doesn't fly, however. In the video, the reporter explicitly asked him, "You would be okay with the Supreme Court leaving the issue of interracial marriage to the states?" and Braun replies, "Yes." Braun didn't misunderstand the question. That's just how unhinged the GOP's racist tantrum is getting.

Most of the other Republicans letting the racism fly aren't even bothering with the unconvincing walk backs. As with Cruz, the Republican National Committee also made clear that "critical race theory" is just the right's newest effort to craft a racial slur they think they can get away with on camera. The RNC tweeted out this gruesome meme where they replace Jackson's initials with "CRT." 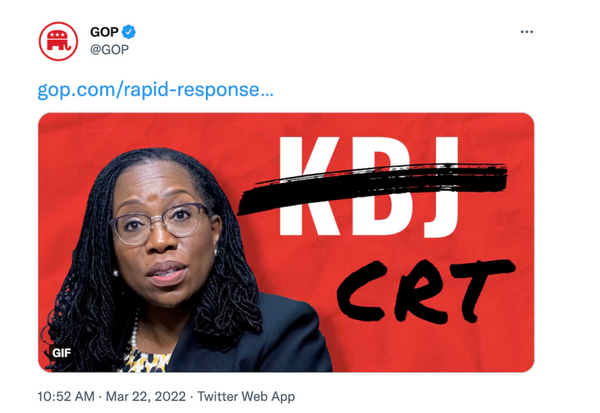 There are just so many more examples I hate to report.

Sen. Marsha Blackburn of Tennessee used her hearing time to hector Jackson about "so-called white privilege." Note that the presence of a twit like Blackburn in the Senate is inarguable proof of the concept. Tucker Carlson of Fox News insisted it has "degraded" and "diminished" the country to have Jackson on the court, and she should be replaced with "a rap star off the street."

The concept of the racist "dog whistle" is a quaint relic from the pre-Donald Trump era.  It's all bullhorns and the GOP tweeting memes that would not be out of place on a white nationalist website.

To be certain, this berserker mode racism is sincerely felt. Modern Republicanism is a clearinghouse for every mediocre person who coasts on white and/or male privilege. They are incredibly threatened at the idea that they might have to compete with women and people of color who are smarter than them. Black women, being both Black and women, draw twice as much vitriol. It's a phenomenon so widespread that there's even a specific word for the bigotry they face: "Misogynoir." Witness the endless, pointless hate that explodes from Republicans every time they're reminded that Vice President Kamala Harris exists, which often turns on white men insisting she's not as smart as she very obviously is.

But there's also no small element of this that is performative trolling.

As with Cruz and his bad faith about "racist babies," Republicans have learned that deliberately acting stupid garners liberal dunks and attention. That, in turn, gets translated to the base as "triggering the liberals," which is all they live for. This narrative is clung to, even though the only people acting "triggered" are right-wingers who lose their minds because a Black woman got a prestigious job. The point is to draw liberals into fights over whether or not it's "really" racist to deny white privilege exists or to use "critical race theory" as a slur. The coin of the realm is attention, and there's no quicker way to get it than to be really, really, really gross.

Unfortunately, as with the rape apologism I wrote about in my Tuesday coverage of the hearing, just because these antics are about political point-scoring doesn't mean that their damage isn't real. Whatever the "trigger the liberals" justification, the result is that blunt racism and misogyny are normalized. And with Republicans constantly relabeling anti-racism as "racism," language is deliberately muddied and confused, making it harder to have a rational discussion about these issues. Which is, of course, the point.

They are racist babies who are so angry about increasing diversity that they're going to smear their garbage all over the place, demeaning not just themselves, but anyone who has the misfortune of watching this deplorable spectacle.