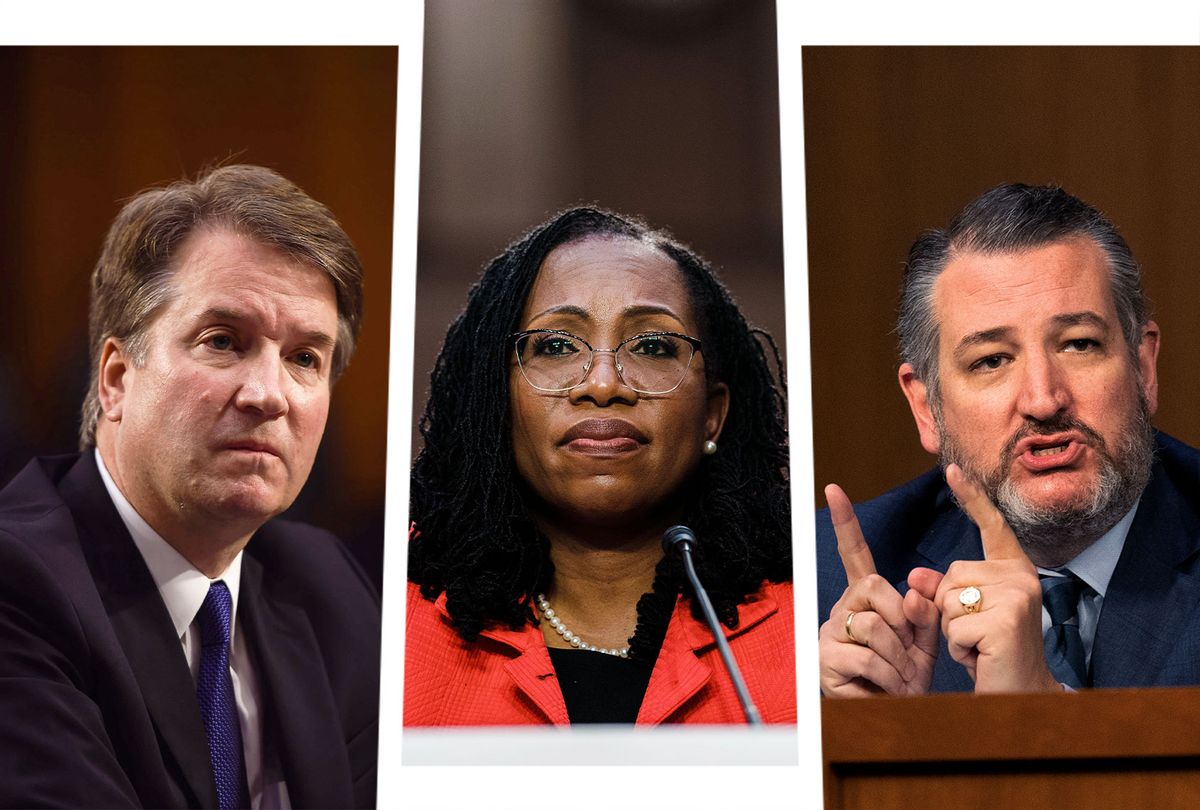 That is the exciting new euphemism that Sen. Ted Cruz, R-Tex., adopted Monday to describe an alleged sexual assault. He rolled this one out during the first day of Ketanji Brown Jackson's confirmation hearing before the Senate Judiciary Committee. Jackson was nominated by President Joe Biden to be the first Black woman to sit on the Supreme Court, but as far as Republicans were concerned, the hearing was mainly about how white men are the truly oppressed in America — especially white men who have been credibly accused of sexual violence, such as Republican Justice Brett Kavanaugh.

It's been three and a half years since Kavanaugh was first held publicly to anything resembling account for allegations of attempted rape, and yet Republicans are still angry about it. Monday's hearing was supposed to be about Jackson but was taken up by Republicans whining about Kavanaugh, and about how men are done dirty when women come forward with stories of rape and assault. Sen. Lindsey Graham told Jackson "none of us are going to do that to you," referring to the 2018 hearings in which Christine Blasey Ford stepped forward to accuse of Kavanaugh trying to rape her. As the New York Times drily noted, one reason might be that "Judge Jackson has never been accused of committing sexual assault."

Sen. Chuck Grassley of Iowa complained about the Kavanaugh hearings being a "spectacle." Sen. Ben Sasse of Nebraska whined about the "jackwagons" who protested the Kavanaugh hearing over the sexual assault allegations. And, of course, the biggest whiner was the forever troll Cruz, who sneeringly told Jackson, "No one is going to inquire into your teenage dating habits."

Of course, no one accused Kavanaugh of trying to date Ford. For those who pretend to forget, what she specifically testified under oath to was that "Brett put his hand over my mouth to stop me from screaming." And while she feared "Brett was accidentally going to kill me," he was "drunkenly laughing during the attack."

Cruz does not believe these behaviors constitute "teenage dating habits." No one does. To describe it that way only serves one purpose: To legitimize sexual assault.

Even though Republicans pretend Ford offered baseless allegations, the overwhelming evidence shows that she was the one who spoke truthfully under oath, while Kavanaugh lied. For one thing, there are two other accusers who went to college with Kavanaugh. But even taking his testimony on its own shows he was transparently dishonest because he pretended he had never drunk to blackout, even in the face of his own emails saying otherwise. He also claimed that obvious dirty yearbook jokes about a girl in his class were innocent joshing. He even tried to claim that his high school title of "Beach Week Ralph Club Biggest Contributor" was a reference to a "weak stomach." Republicans curiously like to act like these obvious lies are credible but that the corroborated accusations Ford made were not.

This stand-by-your-man approach to rape and sexual abuse is just standard operating procedure for the GOP. Donald Trump has been accused of sexual assault and rape by over two dozen women, and crucially, is on tape bragging about how much he enjoys sexual assault. Another Republican justice, Clarence Thomas, was also confirmed despite not just sexual harassment accusations by Anita Hill but by multiple women. Rep. Matt Gaetz of Florida is currently under investigation for sex trafficking a minor. Republican leadership in the House has done nothing in response, unlike the way they censured the two Republican congressional members who have joined the investigation into the January 6 insurrection.

It's not just that Republicans don't take sexual violence seriously. They also project their own ugly habit of shielding and defending alleged sexual predators onto Democrats. For instance, Sen. Josh Hawley of Missouri unveiled a series of nasty and flatly false accusations against Jackson, painting her as some sort of advocate for child sex predators who can't wait to get them back out onto the streets. Needless to say, his claims are utterly without merit.

In response to Hawley's shameless dishonesty, White House press secretary Jen Psaki told reporters, "I'm not sure that someone who refused to tell people whether or not he would vote for Roy Moore is an effective and credible messenger on this." She was referring to yet another high profile Republican accused of sexual abuse: a former Senate candidate who was handsomely funded by and supported by the Republican Party despite nine separate allegations of sexual abuse of minors. The youngest was only 14 at the time of the alleged assault.

With his insinuations, Hawley was nakedly pandering to the conspiracy theory cult QAnon, who like to argue that Trump has some secret plan to break up "pedophile rings" of Democrats — which exist only in the QAnon imagination. In truth, what they're doing is rewriting reality to cast Trump as a hero, to make themselves feel better about supporting a man who is, in actuality, a confessed sexual predator. But while QAnon is an extreme case, the GOP chest-beating about Kavanaugh's alleged victimization during what was supposed to be Jackson's hearing was of the same flavor. Projecting their own crimes and transgressions onto their opponents is a Republican-wide phenomenon.

The Republican tendency to flip reality on its head, pretending that the oppressors are oppressed, is gross even in the best of times. It's especially grim right now, as they groan and wail about their supposed maltreatment during the hearing of the first Black woman ever nominated for the Supreme Court. Right now, there are two Supreme Court justices who are accused sexual predators. That's more than the total number of Black women who have ever served on the high court.

Simply by being there and looking so different than every other person who has been in her position, Jackson disproves the GOP's implicit contention that it's men — and white men especially — who are the true victims of discrimination. It's tempting to write this off as little more than petty political point-scoring, of no consequence as Jackson's confirmation is all but assured. But in doing this, Republicans are spreading myths about sexual violence and recasting the victims as victimizers.  Leave it to Republicans to hijack this historic confirmation process and turn it into an extended gripe session over that one time a white guy got called out for — but did not face serious consequences for — a terrible thing he probably did.

From SCOTUS to "critical race theory": There's no law or fact the GOP feels bound to respect now