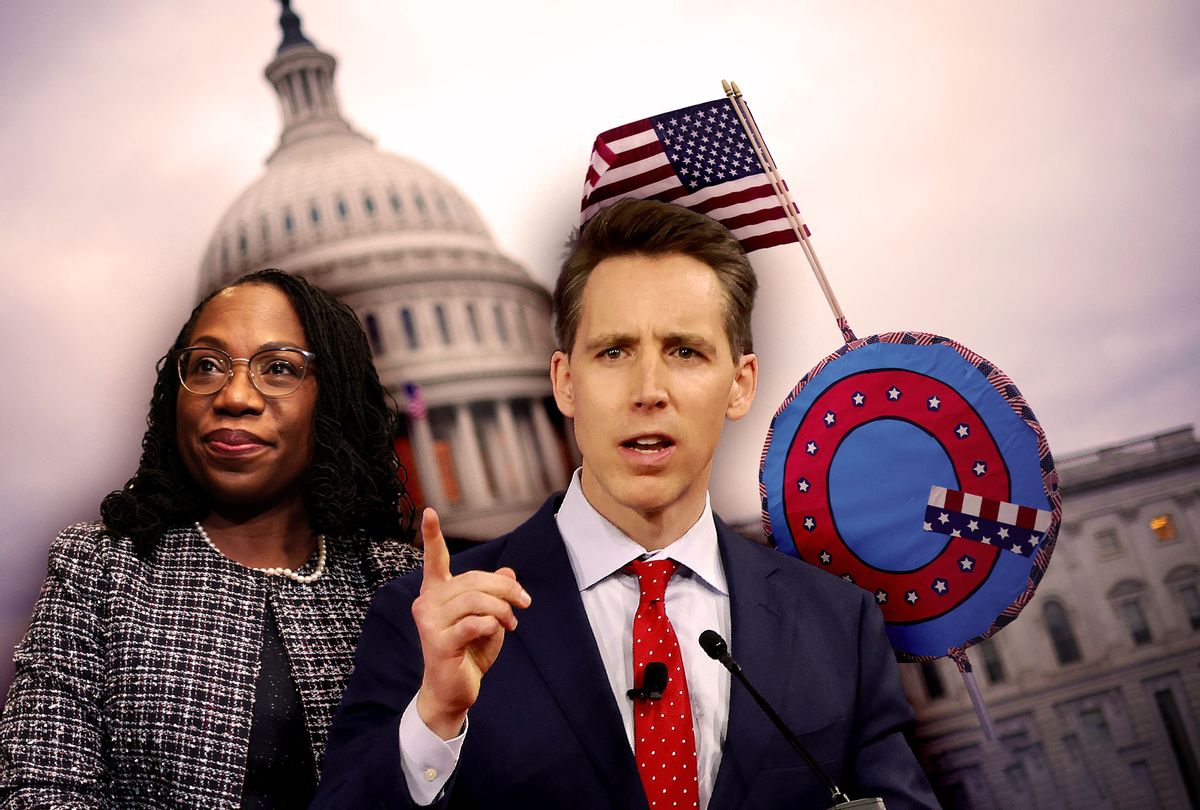 The common wisdom in the Beltway media was that the confirmation hearings for Ketanji Brown Jackson, President Joe Biden's first nominee to the Supreme Court, would be a relatively low drama affair. Prior to her naming, there had been a flurry of fake outrage from the Fox News pundits over Biden's promise to nominate the first Black woman to the court. In the face of Jackson's impeccable resume, however, even the most racist Republicans struggle to deny her qualifications.

Fox News host Tucker Carlson's efforts to "raise questions" about Jackson's credentials fell mostly flat. More importantly, Democrats have a slim majority in the Senate. Republicans can't block her nomination, since Senate Minority Leader Mitch McConnell destroyed the filibuster for Supreme Court nominees in 2017 when he wanted to seat Donald Trump nominee Neil Gorsuch. Her nomination won't really change the balance of the court, as Jackson is replacing liberal Justice Stephen Breyer, so the assumption is that Republicans won't bother to put up much of a fight. But, of course, that assumption overlooks one critical factor in the hearing process: Senate Republicans with presidential aspirations see these hearings as a way to pander to the racist, misogynist, conspiracy theory-loving GOP base.

Sen. Josh Hawley of Missouri — who is heavy competition with fellow Senate Judiciary Committee member Ted Cruz of Texas for the title of "Most Repulsive Creep In The GOP" — previewed his nakedly QAnon-inspired line of attack against Jackson last week in a series of tweets where he insinuated, and not with any subtlety, that she supports child pornography.

Needless to say, Hawley's accusations are lies, as Ian Millhiser of Vox carefully explained. For one thing, Jackson "ios one of the most scrutinized individuals in the entire legal profession," having been vetted "by the Senate on three separate occasions, by the nation's largest police union, and by an organization representing over 30,000 police leaders." Millhiser has done the hard work of laying out the compelling but highly technical case for why none of these accusations make sense, and how Hawley, a graduate of Yale Law, knows full well that Jackson has done nothing wrong or even controversial.

But, of course, Hawley's outrage is wholly fake. He's counting on the fact that few, if any, of his followers will pay attention to the legalese-drenched debunkings on his lies. Instead, they will focus on the titillating accusations that Jackson supposedly champions pedophiles for reasons. Hawley doesn't need to spell out what reasons Jackson, the mother of two, supposedly has for protecting child pornographers. Instead, he can count on QAnon, the far-right conspiracy theory cult that is increasingly colonizing the Republican base, to do that dirty work for him.

And boy, are they.

As Media Matters detailed on Friday, right-wing networks and popular conspiracy theory social media feeds used Hawley's insinuations as a launching pad to tie Jackson to the QAnon belief that the Democratic Party harbors a secret network of pedophiles who drink children's blood. Ordinary Republicans who hear Hawley's accusations will go online to learn more will end up reading content from these conspiracy communities. Many will be sucked into QAnon and other conspiracy communities. It's part of the larger feedback loop between high-profile GOP figures like Hawley and the folks at Fox News — who are also amplifying this baseless attack — and the sewer-dwelling conspiracy theory world on the right.

In other words, this isn't just a baseless smear of a qualified Supreme Court nominee. It's also part of a larger strategy by leading GOP figures like Hawley to radicalize the Republican base by funneling them to conspiracy theories like QAnon. The end game here isn't particularly mysterious. QAnoners were the backbone of the January 6 insurrection and continue to be a source of energy for the growing fascist movement that backs Trump.

Hawley's strategy is one that's grown in popularity since the January 6 insurrection.

Carlson, as usual, led the way in pushing his viewers towards QAnon. He's defended the cult as "gentle people" who merely "like the country." More importantly, he's done multiple segments portraying the cult as purveyors of forbidden views that are suppressed by liberals who supposedly can't handle the truth. That's delicious bait to the trigger-the-liberals crowd, and Carlson knows it. But it's not just Fox News nudging Republican voters to explore their QAnon urges.

Defenders of Florida's "don't say gay" bill, both in the Republican leadership and in right-wing punditry, have been accusing opponents of "grooming" children for pedophilia. In part, those lies are just an attempt to deflect from the radically bigoted nature of the bill. But it's also about feeding the QAnon-inspired cloud of insinuations that Democrats have massive pedophilia-and-child-murder rings.

Most people, even on the right, don't actually believe QAnon conspiracy theories. But this constant, baseless chatter about pedophilia helps create a permission structure in the larger GOP base for reframing their radicalization as a noble effort to "save the children." Even the moral panic over "critical race theory" and storming-school-boards mania is part of this strategy. It allows Republican voters who are in a racist snit over Black Lives Matter and losing the 2020 election to reimagine themselves as noble warriors "protecting" children from Marxism and pedophiles and whatever other nonsense they're riling themselves up about.

Tellingly, the school board freakout has almost nothing to do with actual parents and children. As Jessica Grose of the New York Times explained over the weekend, polling shows that most people who actually have children in public schools "are happy overall with their children's education." The people who are angry about the supposed evils of modern education are just hyped up on right-wing propaganda and have no idea what's really going on. This comports with data from Virginia's 2021 gubernatorial election, in which "anger" over education supposedly turned the tide towards Republican Gov. Glenn Youngkin. Voter turnout data, however, shows that Youngkin won because of a surge of white senior citizens voting, not parents of school-age children. It turns out "critical race theory" is less a funnel for real angst about education, and mostly just a bunch of racists using "saving the children" as cover for their less savory impulses.

And why "the children" have become the lightning rod for right-wing rage isn't especially mysterious. What's driving the current Republican turn towards authoritarianism is a freakout over an America that is changing both in its demographics and its values. "The children" aren't real people to the right, so much as a symbol of the future that is looking very different — less bigoted, more secular, more inclusive — than the America they envision. Conspiracy theories about pedophiles and "critical race theory" are a conduit for this reactionary anger. It allows the MAGA crowd to feel like the good guys, instead of the villains they are.

Jackson, by being the first Black woman nominated to the highest court, will be a magnet for right-wing anxieties about a changing America. The blunter racism that was initially rolled out by Fox News probably won't get traction, because even the most diehard Trumpers still like to pretend they "don't see race." By invoking QAnon conspiracy theories about pedophile Democrats "grooming" children, Republican propagandists can tickle those ugly urges while talking around their racist, sexist anxieties. They may not be able to block Jackson's nomination, but they aren't going to let a good opportunity to further radicalize their base go to waste.