Republicans have hijacked the process: Congressional hearings are now rife with conspiracy theories

Taxpayers are funding a right wing derangement loop, allowing GOP leaders to detach their base further from reality 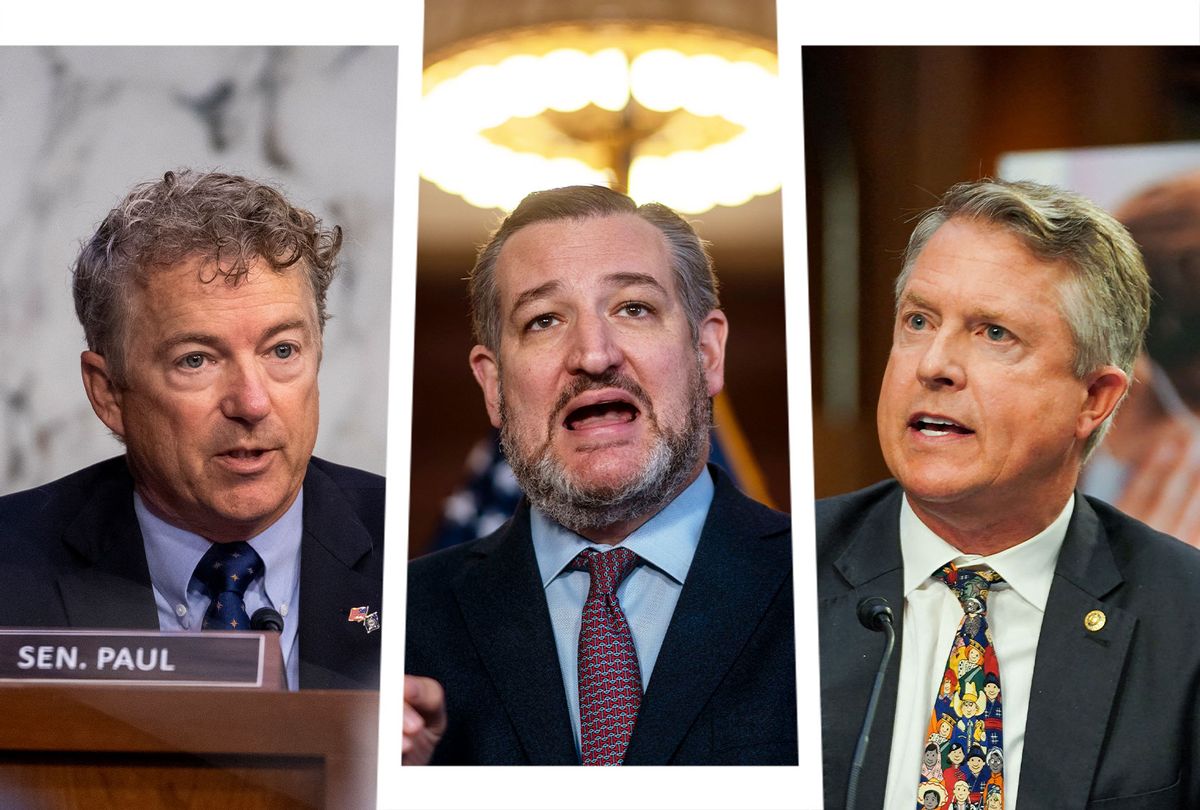 No one should ever accuse Ted Cruz of being held back by a basic sense of dignity.

Last week, the Texas Republican got into hot water with Donald Trump loyalists, who will brook no criticism of the fascist insurrectionists who stormed the Capitol last year. Cruz, who has otherwise been an advocate of Trump's Big Lie as one of eight senators who voted to throw out the results of the 2020 election so that Trump could illegally remain in power, dared to suggest that the people who used violence for that same goal had engaged in a "terrorist attack."

Calling those Trump loyalists anything but peaceful patriots who have never done a bad thing in their entire lives is forbidden in Trumpist circles, of course. For his trespass, Cruz was taken to task by Tucker Carlson and other fascistic leaders in right-wing media far more beloved by the GOP base than the likes of Cruz. And as is his wont, Cruz has been crawling on his belly ever since, begging for forgiveness and making it clear he'll say or do anything to get back in the good graces of the worst people in the country.

Cruz's been on Fox News repeatedly since his momentary lapse in lying, hyping a conspiracy theory/apologia for the fascist insurrection that's long been favored by Carlson: The FBI compelled Trump fans to storm the Capitol. Worse, Cruz has been abusing taxpayer funds in order to push this conspiracy theory. On Tuesday, Cruz spent his time during a Senate Judiciary Committee hearing going off about this idiotic claim that it was the FBI who caused the Capitol riot, not unhinged Trump supporters acting on Trump's obvious and well-communicated wishes.

Like most right-wing conspiracy theories, this one is both incoherent and easily debunked. (A quick Google search for "Ray Epps" leads to some good explanations as to why.) But, crucially, this narrative isn't supposed to make sense. On the contrary, the nonsensical nature of it is very much by design. The whole point of these incoherent conspiracy theories is to create a cloud of bewildering disinformation so thick that the actual truth gets lost in a maze of lies, hand-waving and fart noises.

Even more crucially, Cruz's performance yesterday worked exactly as intended, providing ample video footage that could be cut up and re-edited into clips to be disseminated across right-wing land as "proof" that the FBI is hiding something. Misleading clips spread rapidly on social media with breathless text like "the FBI stonewalled and refused to answer" and "The American people deserve answers."

No one sharing these videos wants "answers," however. They just want to make a bunch of noise to distract from the fact that there's no mystery regarding what happened on January 6. It was an insurrection, instigated by Trump, for the purpose of overthrowing an election so he could be installed as an illegitimate president.

Unfortunately, Cruz's sleazy behavior Tuesday is not an anomaly, but part of a larger right-wing derangement feedback loop.

Far-right conspiracy theories first bubble up from the swamps of Infowars and various online Trump-loving forums. Republicans in Congress, desperate for both attention and donations, then use congressional hearings to float these conspiracy theories, knowing they'll be cut into videos that get widely shared on social media and shown on Fox News. Those well-produced videos, in turn, legitimize the lies and embolden the people in the fever dream swamps to keep generating conspiracy theories. The whole thing has an addictive quality to it, with both Republican politicians and their audiences needing ever-nuttier conspiracy theories, in order to keep getting the same derangement high.

RELATED: Why they hate him: Dr. Fauci triggers the right because he reveals their deepest insecurities

Cruz wasn't even the only Republican in the Senate employing this tactic on Tuesday.

During another Senate hearing, this one held by the Health and Education Committee, both Sens. Rand Paul of Kentucky and Roger Marshall of Kansas used the presence of Dr. Anthony Fauci — Director of the National Institute of Allergy and Infectious Diseases and a favorite hate object on the right — to generate more propaganda footage. Both men floated elaborate and deliberately obtuse conspiracy theories about Dr. Fauci that simultaneously imply that he somehow created the coronavirus and also that COVID-19 is a socialist hoax.

Yes, these ideas contradict each other. No, the people who claim to believe these theories don't care about that contradiction. As usual, the point is not to make sense, but to grind rational discourse into dust.

As an added bonus, Marshall kept making false accusations that Dr. Fauci is hiding his financial position, with an obvious intent to imply that Dr. Fauci is somehow secretly profiting off of the pandemic. The same pandemic that right-wing conspiracy theories paint as somehow both a bioweapon but also not an actual threat. Dr. Fauci got fed up with all this and called Marshall a "moron" into a hot mic. Sadly, Marshall is not actually a moron. He's a cynical opportunist who is deliberately generating misinformation in order to increase his name recognition with the GOP base and rake in more money. Marshall, frankly, seems thrilled that Dr. Fauci called him a "moron." He's hyping the story, banking off the GOP base's well-known hatred of Dr. Fauci. There is no better way in GOP fundraising circles to get attention and make money than to cast yourself as a primo liberal-triggerer.

So right-wing politics should be understood as a topsy-turvy version of pro wrestling, where real-life heroes like Dr. Fauci are recast as the heel and real-life villains like Rand Paul and Ted Cruz get to play the role of the face. By hijacking congressional hearings in order to put on these wrestling matches, Republicans aren't just wasting taxpayer money and destroying the ostensible purpose of hearings to gather and expose the truth, they're using the prestige of Congress in order to disseminate their conspiracy theories more widely. It's a derangement loop that's driving the GOP base further away from reality and deeper into a fascist ideology.

RELATED: Republicans turned a serious hearing on a national security threat into another episode of "triggering the libs"

We only need to look at last summer's hearing of the January 6 committee, where Congress heard testimony from law enforcement that was there during the insurrection, to see what happens when bad faith Republicans are barred from the microphones. That hearing generated real information, unmarred by the grandstanding and conspiracy theories of Republicans competing to see who can act the most maniacal for their base.

While there may be no legal way for Democrats, who technically control the gavels, to put a lid on the misuse of hearings this way, it's time to explore the possibility of shutting Republicans up, or at least minimizing how much they can abuse the hearing process. Turning congressional hearings into little more than Infowars taping sessions isn't just embarrassing for Congress, it's undermining our democracy.