Why they hate him: Dr. Fauci triggers the right because he reveals their deepest insecurities

The GOP's obsession with Dr. Fauci reveals the deep insecurities driving the movement 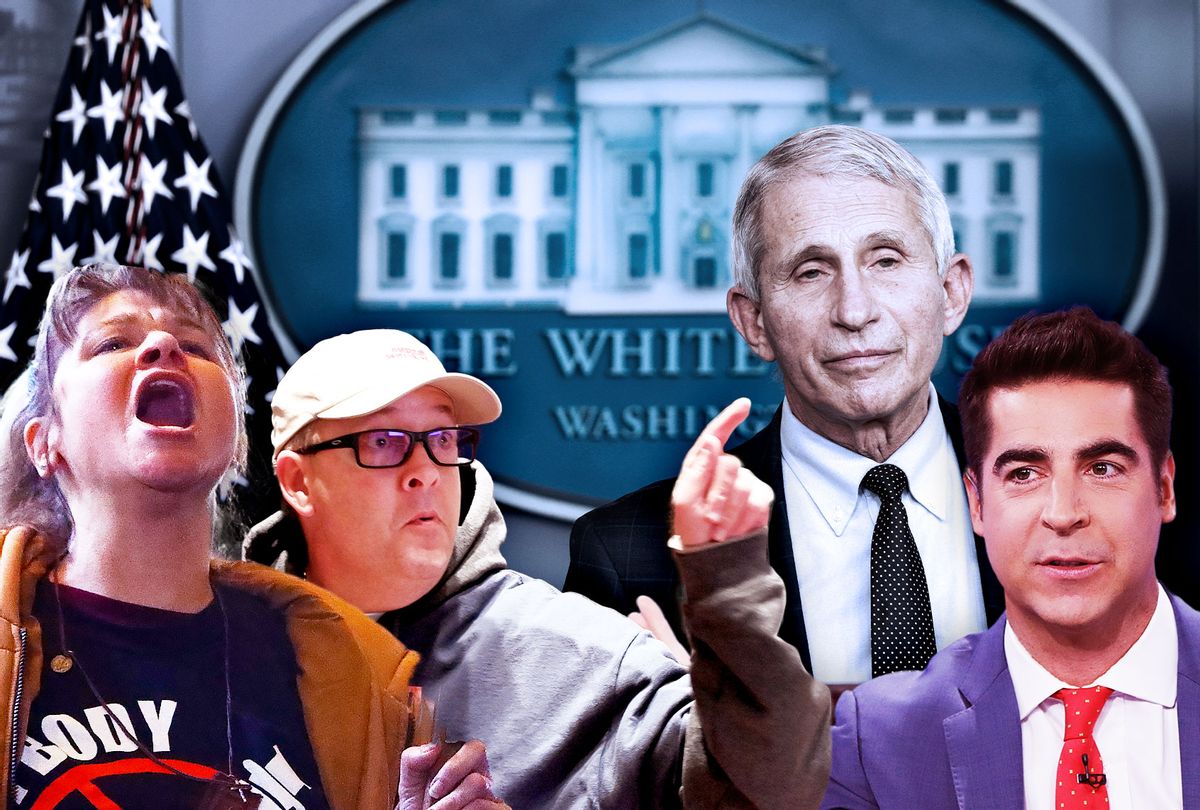 It's the laugh line in a classic bit from Texas comedian Bill Hicks, recounting his encounter with a Waffle House waitress in Tennessee who did not understand why a man sitting by himself in a coffee house would read a book. The bit continues with a truck driver standing over Hicks and menacing him with, "We've got ourselves a reader."

Hicks, who died of pancreatic cancer in 1994, has a lot of material that hasn't aged well. Still, I have fond memories of this part of his act, which tended to kill with Austin audiences, packed as the city was back then with escapees from the less liberal parts of Texas. That audience brimmed with people who had repeatedly been on the receiving end of the anger Hicks described. He captured the defensive rage the willfully ignorant have towards those who look at the larger world with curiosity, instead of fear.

I thought about that Hicks bit when I saw Tuesday's news that Fox News' Jesse Watters, a man who radiates a strong "I paid some nerd to write my term papers" energy, threatened the life of Dr. Anthony Fauci, who has been the top COVID-19 advisor to President Joe Biden. Oh, Watters pretended it wasn't a threat when he told an audience at the conference for right-wing youth group Turning Point USA — founded by Charlie Kirk, who blames his lack of a college education on minorities supposedly taking "his" spot — to "ambush" Dr. Fauci with a "kill shot." Watters pretended he was speaking metaphorically, encouraging "deadly" questions instead of actual violence. But obviously, the garish rhetoric, especially in light of the growing violence on the right, was meant to intimidate.

What struck me about the whole incident was how weird it was.

Both Watters and his audience — who were whooping and hollering — are just so clearly threatened by Dr. Fauci. The frenzy of defensive rage that Dr. Fauci inspires on the right is hard to square with the man himself, a slight and mild-mannered fellow who retains a 50s-era Brooklyn accent. It's like being threatened by a puppy dog. It's like experiencing foaming rage at a child flying a kite. Dr. Fauci's main two public qualities are that he's very nice and wants to help. Who hates that?

Well, right-wingers do. And it's not just Watters.

Dr. Fauci has been the favorite target of "who does he think he is"-style rants by pretty much every right-wing pundit and politician out there for over a year now. He's easily the most reliable hate object they've had since Hillary Clinton and Barack Obama. Those three are some readers — and that reliably triggers the bullying response in the Jesse Watters types. Despite all of their chest-thumping bravado, this knee-jerk hostility to those perceived as intellectually curious evinces a deep insecurity driving right-wingers.

We also see this in the furious reaction on the right to polling data showing that young Democrats are not interested in socializing with, much less dating, Republicans. Considering how much liberals are demonized in right-wing media, you'd think the last thing conservatives would want is their company. But so much of that anger is driven by conservative insecurity, knowing that ultimately, their company is mostly irritating and definitely not interesting, and lashing out at others for perceiving that.

Which isn't to say the stereotype of the smug liberal doesn't exist. That Hicks routine is iconic in the annals of smug liberalism. But nowadays, the trend in smug liberalism tends to be more condescending than catty. It's those on the left who mistake intentional obtuseness for inborn stupidity. It manifests in lectures at other liberals about how we need to be patient with the unvaccinated Trumpers, because they can't be expected to understand how vaccines work. Or in treating Fox News viewers like dim-witted ciphers, instead of people who actively seek out propaganda and reject reality-based information. Say what you will about those on the left who are angry at the unvaccinated, fascistic Fox News audience — at least we give them the respect of knowing that their ignorance is a choice, not a predetermined condition.

In truth, the "smug liberal" is far more of a paranoid fantasy on the right than a reality. It's the manifestation of their own resentment of people who did do the reading, people who do want to know more about the larger world. They are jealous of people who say yes to novel ideas and new experiences, instead of freaking out at the mere thought of having to learn something new. It's not that such people are especially smug. Dr. Fauci, for instance, radiates kindness and patience. It's that conservatives are just that insecure about their own shortcomings.

Ashley Hope Perez is the author whose book, "Out of Darkness," was the object of Bell's rage. As amusing as the clip is, it hasn't been so fun for Perez, who has been the target of harassment for writing the historical novel that explores racism in 1930s Texas. As Perez astutely noted on a recent Slate podcast, the hysterics over sexual content are actually a cover for the true objections conservatives have to the books they are challenging: that they center "characters or experiences from nonwhite, nondominant communities." What scares white conservatives is the possibility of learning — or having their kids learn — anything about the world outside of their cloistered enclaves of willful ignorance.

It's been long understood that, once you control for demographic factors, the personality trait psychologists deem "openess to experience" is a major predictor of progressivism. That used to mostly be an interesting but irrelevant factoid, like learninig that orange cats are mostly male or what a "strawberry moon" is. Now, however, this personality difference is a central motivating factor in a growing fascist movement. The kind that wants to violently put down those who do express inquisitiveness and a willingness to be intellectually challenged. The kind of movement that leads crowds to cheer wildly at the idea of taking a "killshot" at an 80-year-old man whose main crime seems to be that he studied hard and knows things about science. This isn't just an unpleasant encounter in a Waffle House. It is a rage that is threatening to destroy a nation.