Inside the four-day Phoenix-based carnival of right-wing nationalism 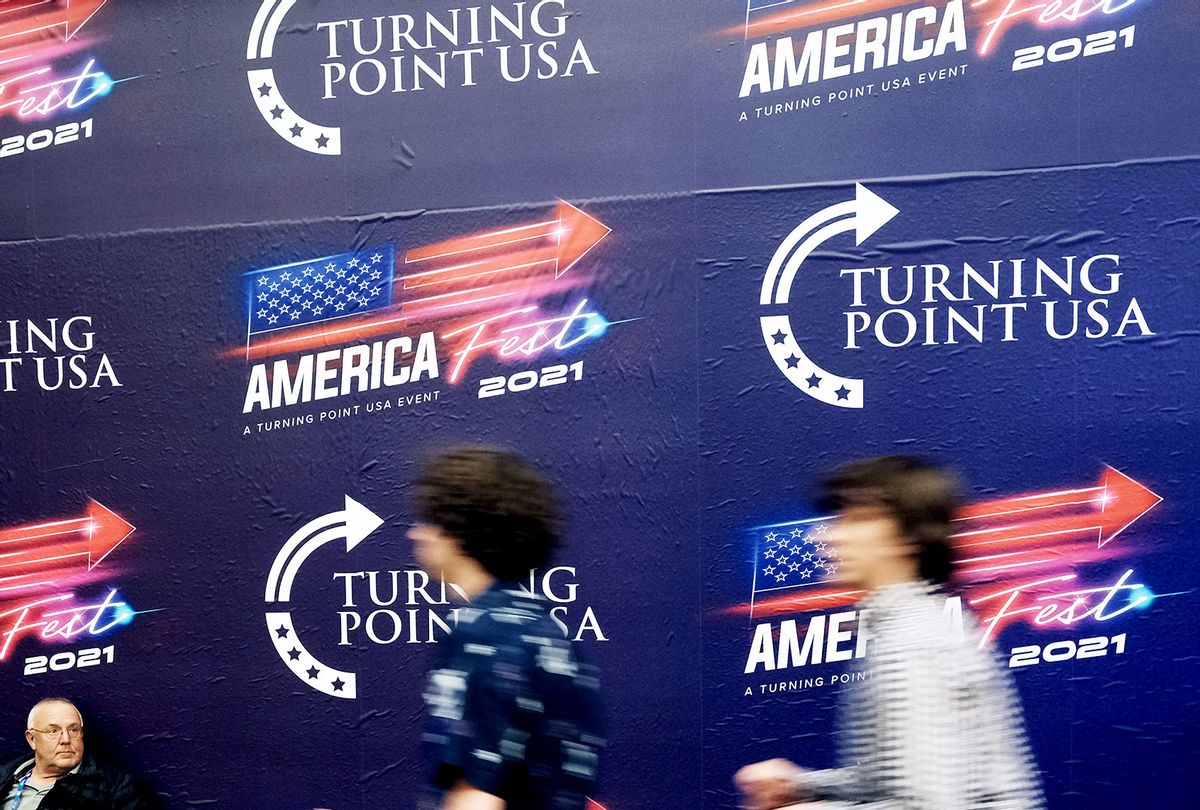 People attend Turning Point USA’s America Fest 2021, a gathering of conservative’s and Donald Trump supporters, on December 18, 2021 in Phoenix, Arizona. The four-day event, held at a convention center in downtown Phoenix, features some of the nation’s most popular conservative speakers including Tucker Carlson and Donald Trump Jr. Some of the conference's sponsors include The Heritage Foundation, Fox Nation, and Young Americans for Liberty. AmericaFest 2021 will run Saturday through Tuesday. (Spencer Platt/Getty Images)
--

AmericaFest – the four-day Phoenix-based carnival of right-wing patriotism – ended Tuesday with WrestleMania-style appearances from a laundry list of conservative celebrities hell-bent on hammering home the long-dead notion of American exceptionalism. The event was, by all accounts, a gauche display of firework-filled fascism, with commentary from the likes of Rep. Lauren Boebert, R-Colo., Rep. Marjorie Taylor Greene, R-Ga, Sarah Palin, Tucker Carlson, Candace Owens and Kyle Rittenhouse.

RELATED: After the monster's ball: CPAC celebrates the coup, and offers hints of the turmoil ahead

The event, hosted by Turning Point USA, a conservative student group run by Charlie Kirk, featured headliner Tucker Carlson on Saturday. On Sunday, the festival's attendees bore witness to a speech by Greene, who addressed some of them with a racial slur while remarking upon their apparent diversity.

"[W]hen I walked in yesterday, I was like, 'What kind of people come here?' So I'm walking around and seeing some good people and I see white people, Black people, brown people, yellow people," Greene said, later challenging the notion that hers is a "white supremacist party."

Back in July, Greene invoked a racist trope by questioning Chinese-Americans' apparent dual loyalty, saying that "if I was in charge and I had my way, I would come down on China so hard."

"I would kick out every single Chinese in this country that is loyal to the CCP," she added at the time. "They would be gone. I do not care who they are."

On Monday, event-goers also heard remarks from Rittenhouse, who was last month found not guilty of murder in the Kenosha shootings, which left two men dead and one injured at a Black Lives Matter protest. Donning a blue suit and tie, the 18-year-old, who's since been valorized by the right as a dutiful vigilante, joined a panel to reflect on his victory in court.

On the trial, Rittenhouse said, "It's helped me grow a lot, it's helped me mature,' adding that faith played a large role in the experience.

"I believe God's been with me every day of the trial, every day since Aug. 25," he added. "I pray to him every single night … I pray for strength to get through whatever happens to me."

That same day at the festival, Rittenhouse saw support from Boebert, the gun-toting conservative congresswoman notorious for her ongoing spats with progressive lawmakers.

On Monday, Boebert praised Rittenhouse and his legal team, saying that she's "got to give it up to [them] … because they didn't say 'hey look we shot the guy but we didn't pull the trigger.'"

Her comment was in reference to recent remarks made by actor Alec Baldwin, who in October discharged a prop gun on the set of his upcoming movie "Rust," killing cinematographer Halyna Hutchins. Earlier this month, the actor claimed in an ABC interview that he "didn't pull the trigger." Still, the incident has become fodder for gun rights activists, who mocked Baldwin online and called out the media's alleged bias in its treatment of the incident.

Though Rittenhouse's presence at the event was largely met with rapturous applause, he did see some pushback. According to The Daily Beast, conservative independent journalist Elad Eliahu was booted from the event after "ambushing" Rittenhouse with questions about his support of Black Lives Matter. Security guards reportedly revoked Eliahu's press pass and threatened him with "criminal trespassing."

Perhaps the biggest headline maker out of the event was Fox News host Jesse Watters, who encouraged the young audience to take a "killshot" at Dr. Anthony Fauci, causing the head of the U.S. response to COVID-19 to call for Watters' immediate firing.