After the monster's ball: CPAC celebrates the coup, and offers hints of the turmoil ahead

CPAC speakers, including a defeated ex-president, almost dared each other to excuse Jan. 6 and encourage violence 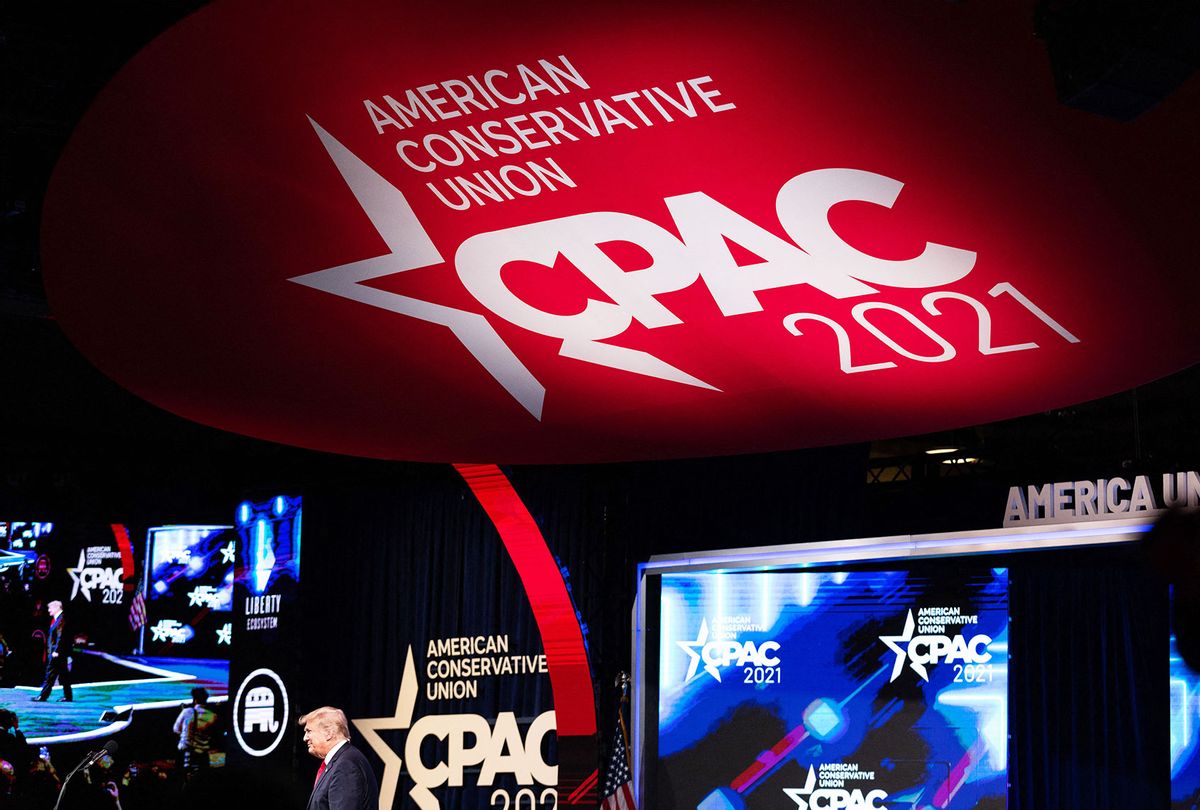 In keeping with its macabre origins, the CPAC monster's ball both celebrated and encouraged right-wing political violence in its various forms. Donald Trump's presidency gave full permission for such violence. His coup attempt and the attack by his followers on the U.S. Capitol was but one more step in the normalization of right-wing political violence in service to the neofascist cause. As seen at CPAC and across the right-wing echo chamber, stochastic terrorism — in which violence is encouraged and implied but not directly endorsed — is increasingly being replaced by overt and direct threats.

The Big Lie that Donald Trump had the 2020 election stolen from him, is still the "real" president and will somehow be returned to office next month (or at least soon) is accepted as truth by the CPAC faithful and large numbers of Republicans.

Likewise, the coup attempt and right-wing terrorism of Jan. 6 are also understood to be the acts of "patriots" who are now understood as "political prisoners" and "heroes." Alleged participants in the Jan. 6 attack were also present and feted at CPAC. They were not shamed or condemned for their treasonous behavior and overall support of sedition.

Rep. Lauren Boebert of Colorado, a featured speaker, mocked the hundreds of thousands of people who have died during the COVID pandemic by encouraging people not to be vaccinated, calling the lifesaving coronavirus vaccine "Fauci's ouchie."

Donald Trump and his regime's response to the coronavirus pandemic was a combination of sabotage, indifference and self-interest, acts which in total constitute democide against the American people. That crime against humanity is now being celebrated by Trump's Republican Party and his followers.

During her speech at CPAC, South Dakota Gov. Kristi Noem stuck to the right-wing moral panic script over "critical race theory," understood as a danger to white children, who are being indoctrinated into Marxism and taught to hate themselves.

On Sunday, Noem would tell her audience that "Critical race theory is hate, division, and it's not American. It's offensive. We do not have racism in our DNA in this country." And what does one do, of course, when told that the the well-being of one's children is being threatened by such evil and devious forces? Understandably, one resorts to violence.

In one of the most direct commands to commit acts of right-wing violence and terrorism, Rep. Mo Brooks of Alabama said that conservatives must act in the spirit of George Washington during the Revolutionary War and be prepared to "fight for America." The message was clear enough: Right-wing "patriots" must be prepared to kill and die for their beliefs. This summary is from the Independent:

Representative Mo Brooks asked the crowd at the 2021 Conservative Political Action Conference whether they are willing to "sacrifice" themselves as their "ancestors" did during the American Revolutionary War encampment at Valley Forge, where hundreds of soldiers died of disease.

The Alabama congressman — running for a Senate seat in the state with the endorsement of former President Donald Trump — is facing a censure effort and a lawsuit from Democrats in the House of Representatives after he joined a months-long campaign to undermine the results of the 2020 presidential election, culminating in a speech telling the former president's supporters to "start taking down names and kicking a**" before the riot at the US Capitol.

"Our choice is simple: We can surrender and submit, or we can fight back, as our ancestors have done," he told the CPAC attendees on 9 July.

He added: "That's the kind of sacrifice we have to think about, and I ask you – are you willing to fight for America?"

These are not empty threats: Brooks is one of alleged ringleaders in Trump's coup attempt, which aimed to nullify the results of the 2020 presidential election.

Of course Trump himself was the featured guest and keynote speaker. He would tell the CPAC faithful that:

Democrats are ruthless, but they are united. They don't have these Romney types. They don't have them. It must be wonderful to live like that, but they have bad policy and they have policy that's going to destroy our country. Like socialists and communists movements throughout history, today's leftists do not believe in freedom, they do not believe in fairness, and they do not believe in democracy. They believe in Marxist morality. Anything is justified as long as it hurts their political opponents and advances the radical agenda of their party. It's a radical agenda like nobody has seen before. Before our very eyes, the radical left Democrats are turning the law itself into a weapon for partisan persecution. …

Our glorious American inheritance was passed down to us by generations of American patriots who gave everything they had. Their sweat, their blood and even their way of lives to build America into the greatest nation in the history of the world, and we are not going to let it be taken away from us by a small group of radical left Marxist maniacs. We're not going to let it happen.

Perhaps the most dangerous escalation of Trump's appeals to fascist violence is his attempt to canonize followers who die in service to him and the movement. As seen in the wake of Jan. 6, such people are now "martyrs" to the cause. This kind of myth-making is a common propaganda strategy among political death cults, from the Nazis to ISIS. Joseph Goebbels would be very proud of the Trump movement's elevation of terrorists into heroes.

Ultimately, the implicit and explicit calls to violence at CPAC are symptomatic of a larger problem in America. With neofascism in the ascendant, the Republican Party and right-wing echo chamber are amplifying violence as a means of keeping and holding political power. It's an understatement to say that such values and behavior are dangerous to democracy.

By email, I asked Dr. Bandy Lee, one of the world's foremost experts on violence and public health, how she perceives Trumpism's increasing public embrace of violence and physical threats against its enemies. She began her response by noting that violence, whether directed at others or the self, "is best considered a contagious disease":

In science and in medicine, the distinction between physical and psychological diseases has all but dissolved. People debate whether Donald Trump is a symptom or a cause, but he is both. If he were removed as soon as specialists identified him and made their public health prognosis, he would have remained a symptom. Unfortunately, he was not, and his violence-proneness has spread as never before from a president.

This is why I try to emphasize the concept of "shared psychosis," whereby a severely symptomatic person in a position of power transmits his symptoms through exposure and emotional bonds. Symptom transmission differs from ordinary persuasion, or the convincing of ideas, in that it "catches" through compulsion, or irresistible emotional drives that are not amenable to logic or evidence. The results are quite dramatic in family settings or in street gangs, but we now see this at national scale because of the influential position he held.

Given the events of Jan. 6 (and the Age of Trump more generally), law enforcement and national security experts are warning that the United States may experience a sustained right-wing violent insurgency. Such experts also warn that, once it becomes clear that Trump will not miraculously be returned to power, we are likely to see acts of domestic terrorism directed at Democratic elected officials, Black and brown people, and others targeted as "the enemy."

On this pattern of escalating violence, Lee warns:

Fascism is more of a mental pathology at societal scale than a political ideology.  Since we failed to intervene at the seeding phase, the spread has become exponential, just like any pandemic, but it is still not impossible to reverse the tide.

Donald Trump's being "gone" has not been much of a remedy because he was allowed to stay in power for so long, and even now we are far from containing him.

Over four years, he had "infected" and hence created many more mini-Trumps who act individually or at local levels to transmit symptoms.

Indeed, there was rapid escalation of suicides following his election, and we are now seeing homicide levels that reflect his presidency in 2019.  We can mitigate the violence more directly through local means, but a truly preventive intervention needs to happen at the presidential or national level.

As illustrated at the CPAC gathering, Joe Biden may be president, but America remains in the grip of a national nightmare fueled by Trumpism, the Republican Party and the larger white right. What can or will the Democrats do to break this cycle? What are they doing right now to save American democracy from the ferocious energy of fascism and political violence, seen in miniature this past weekend?