Stochastic terrorism: There is nothing funny about Mike Pompeo's violent PAC recruitment ads

The PAC from the former secretary of state launches with a violent call to arms, recruiting "pipehitters" to join 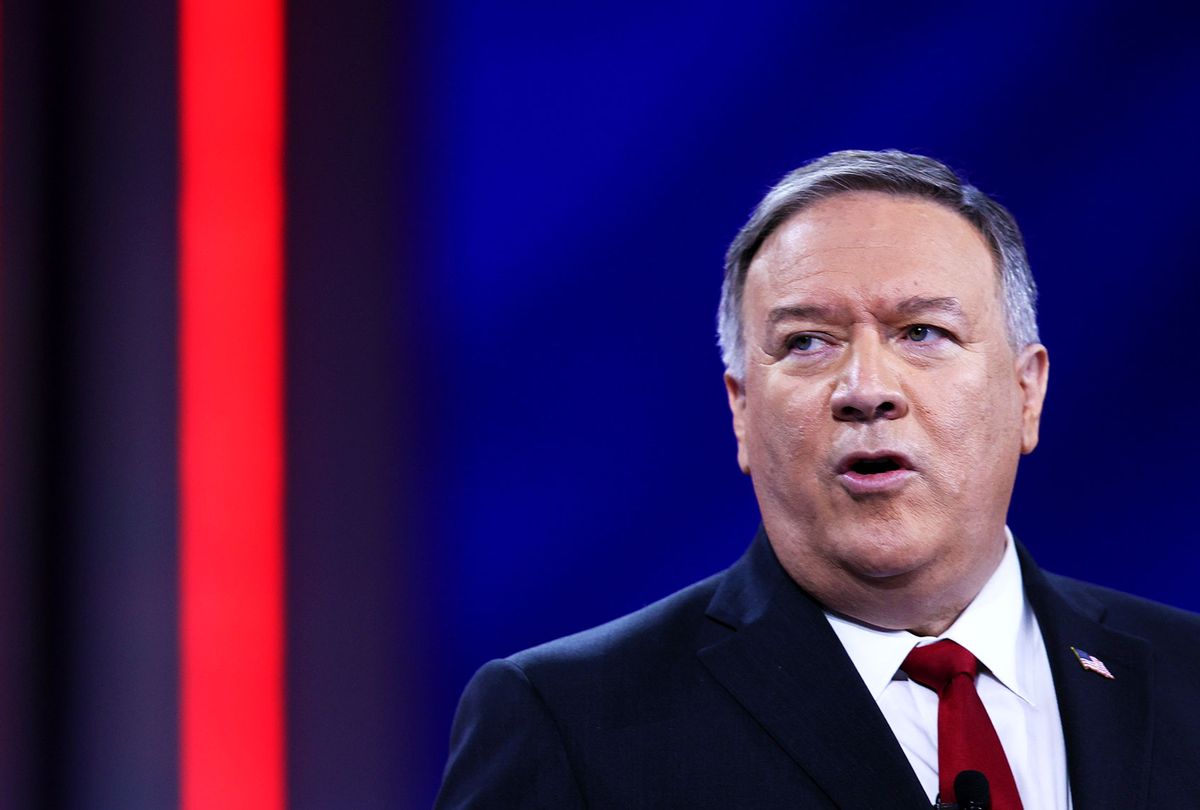 America feels like it's stuck in a version of Bill Murray's classic 1993 film "Groundhog Day," in which Murray's character is forever stuck reliving the same day.

But this real-life version of "Groundhog Day" is not a comedy — it is a dystopian horror movie.

Trump and his lackeys continue to show the American people and the world in an obvious, explicit way exactly who and what they are: neofascist authoritarians who support terrorism and other acts of violence to obtain and keep political power.

This anti-democracy behavior will continue because Trump and his followers have not been punished, nor suffered any negative consequences for their behavior.

Here's the most recent example.

On Tuesday, Mike Pompeo — 2024 Republican presidential hopeful, former secretary of state and CIA director for the Trump regime — announced the formation of his own political action committee called "CAVPAC".

He explains its mission as:

We named the organization CAVPAC as a nod to my time in the U.S. Army Cavalry – the CAV in the PAC.  My cavalry service taught me that America needs warriors who lead and are willing to ride first into the fight without fear.  CAV also stands for Champion American Values – the values that we know have made our country exceptional.  The focus, the fight and the desire to win will be at the center of my work leading CAVPAC and those who join alongside us.  We will support leaders of character and integrity who are wholly committed to these same values and will work without fear to build our future.  Our mission is clear: take back the United States House of Representatives, the United States Senate, as well as build conservative state legislatures and governorships across the country.  Concurrently, we will advocate together for these values in every space of American life. I ask that you join with me in the good and worthy fight to champion American values.

In conjunction with the announcement of his new PAC, Pompeo began sending out a series of tweets recruiting "pipehitters" to join his organization.

These tweets included these lines:

The website for Pompeo's new PAC also includes this call to action for its so-called "pipehitters":

In your everyday lives, stand up for our future: at the PTA meeting, in your workplace, at the bowling alley. Be confident in reminding others of our vision. If you aren't comfortable with what you're seeing or hearing — no doubt others are feeling the same way. If you've witnessed attempts at systemic changes to the Left — or found a way to constructively resist those changes, write or send a video to Mike (to the left). Together, we'll sound the alarm.

Mike looks forward to hearing from you today. Join him as a Pipehitter in the Cavalry and be at the front of the battle to Champion American Values.

Beyond Pompeo's vague definition, what is a "pipehitter?"

In military slang, a "pipehitter" is a member of a special operations unit such as the Navy SEALs, Delta Force, the 75th Ranger Regiment, the Green Berets, or other elite forces.

The word "pipehitter" can also be used to describe a mafia enforcer or a street thug who is feared because of their prowess with and enthusiasm for violence.

"Pipehitter" has also been used to describe strikebreakers and other company enforcers who attacked union members and labor organizers in the 19th and 20th centuries in America and elsewhere.

Pompeo faced immediate criticism for the name of his new organization and his attempt to recruit "pipehitters."

The mission statement for Pompeo's new PAC signals to a right-wing fantasy world, where (white) "patriots" and "real Americans" are under siege and "victimized" in "their own country" by "evil" and "traitorous" "liberals." These "real American" "patriots" should be prepared to use violence to "defend" themselves and their communities, Pompeo hints.

This fascist aesthetic and political logic is antithetical to normal politics and democracy; such rhetoric implies that violence is an acceptable means of resolving political disagreements.

In normal times, Pompeo's PAC would just be one more (still dangerous) example of how American culture – especially on the right – fetishizes the military while celebrating a lazy, empty understanding of "patriotism."

But in America in the Age of Trump, Pompeo's PAC and its embrace of "pipehitters" reflects a much larger trend.

Donald Trump, his Republican Party and larger neofascist movement attempted a violent and lethal coup on January 6. The Big Lie, that the election was "stolen" from Donald Trump, continues to hold power over a majority of Republican voters. Moreover, more than 50 percent of Republicans actually believe that Donald Trump is still president, according to polling data. The Republican Party and its leaders refuse to properly investigate the coup. Why? Because they are implicated in it, and support using violence (including another coup attempt) to overthrow Democratic presidents and other elected leaders on the local, state, and national level.

For several decades, the right-wing disinformation news media — anchored by Fox News — has been using a technique known as "stochastic terrorism" to encourage violence against Democrats, liberals, progressives, Muslims, non-white people and other targeted groups.

Public opinion and other research repeatedly show that white Republican voters, Trumpists, and other right-wing voters increasingly support the use of political violence to "save" their "traditional way of life".

New research from the Chicago Project on Security and Terrorism also shows that white middle and upper class suburban Republican voters are also being increasingly radicalized into political violence because of a fear that they are being "replaced" by nonwhite people.

Law enforcement and other national security leaders and experts continue to warn that right-wing political violence represents the greatest threat to America's domestic safety and security.

In a new article in the Washington Monthly, Daniel Block details how right-wing extremism, polarization, and attacks on democracy more generally may push American society into a civil war or insurgency. In it, he notes:

Does America have enough extremists to sustain an insurgency? [...] Research suggests that tens of millions of Americans view political violence as acceptable. This doesn't mean that tens of millions of people are willing to commit violence themselves. But they don't need to be. According to The New York Times, between 15,000 and 20,000 Americans belong to militias. If there's at least tacit outside backing, that's more than enough potential actors. "These groups are in the hundreds, and membership is in the five digits," says Linda Robinson, a longtime foreign correspondent covering the Middle East and the director of the center for Middle East public policy at the RAND Corporation. "This puts it up at a parallel with some of the more significant armed insurgencies in other countries that many of us have spent years studying."

Block details the members of the right-wing "militia scene," ranging from the Three Percenters to the Oath Keepers to the Boogaloo Boys. Yet the right-wing militias in America are "diverse and chaotic," Block writes. "Without a clear hierarchy and leadership, America's militias would find it impossible to wage organized warfare against the federal government," he says. "That is part of why a redux of the 1860s is currently unlikely."

"But international experience suggests that disorganization among insurgents is no impediment to sustained violent activity," he continues. "Indeed, for many states struggling with serious civil conflict, diffuse terrorist networks are the norm."

That is troubling, and doesn't bode well for the future of the republic. Indeed, leading academics and other experts warn that US democracy is experiencing an existential crisis. That crisis was triggered by Trump and the GOP's assault on voting and civil rights, as well as on the rule of law, long-standing political norms, and governing institutions.

How did the public respond to Pompeo's new PAC and his attempts to recruit some "pipehitters" for his cause?

Online and elsewhere, there was much mockery. Many focused on the word "pipehitter" to make jokes about drugs, Pompeo's intelligence and that of his supporters. Those news websites that chose to cover Pompeo's announcement largely reported on the mockery as opposed to the substance of Pompeo's new PAC, or his rhetoric.

In total, Pompeo and his PAC are not being taken seriously by many in the public or among the chattering class.

As I have repeatedly warned here at Salon, this is all so much hysterical laughter and liberal schadenfreude by people who are in a state of existential terror because of the trauma inflicted on them by the Trump regime. In that way, the laughter is self-soothing, psychological defensive behavior.

Ultimately, laughter will not save the American people or their democracy from the monstrous forces of Trumpism. Why? Because it is a form of surrender and inertia, and not the positive action needed to effectively resist and then defeat American neofascism in its various forms.