Trump will leave office on Jan. 20 — but in the meantime, right-wing grifters make bank by pretending otherwise 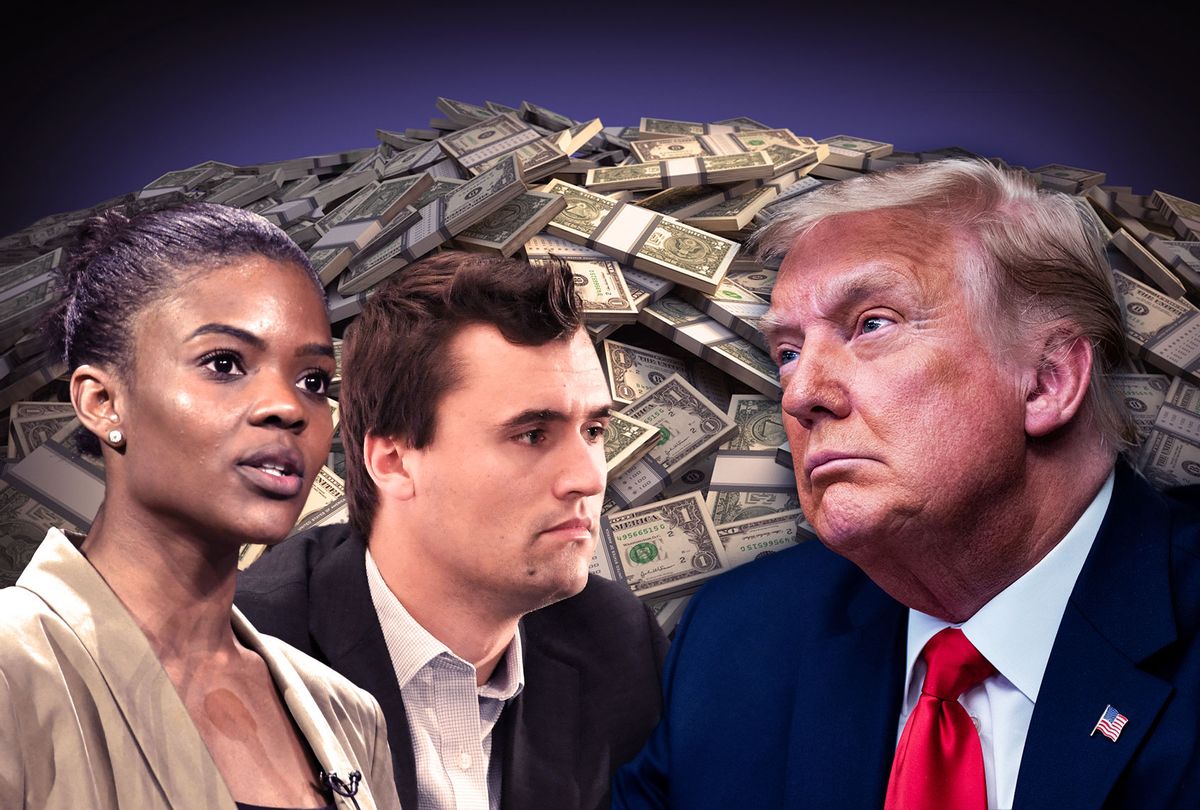 On Sunday morning, Donald Trump let loose with what may be his most unhinged performance yet — which is really saying something — of his extended effort to pretend the election was stolen from him by President-elect Joe Biden. In a 45-minute interview on Fox News with host Maria Bartiromo, which was more like an uninterrupted dramatic monologue, Trump unloaded an absolute truckload of lies. He lied about ballots and voting machines, claiming that millions of fake votes were recorded. He suggested the FBI was "involved" in the imaginary conspiracy against him. He even said he "came up" with the coronavirus vaccines, a claim that is utterly ludicrous but will be swallowed without complaint by all the people who still mock Al Gore for claiming to have "invented" the internet — which Gore never actually said.

What's especially weird about this whole situation is that Trump is doubling down on these false claims in the face of an epic failure to get his attempted coup off the ground. The recount that Trump demanded in Wisconsin — although his campaign only paid for a recount in two overwhelmingly Democratic counties — not only affirmed Biden's win in that state, but increased the president-elect's total by 87 votes. Meanwhile, Trump's losing streak in the courts only got worse over the weekend, with the Pennsylvania Supreme Court dismissing one Trump lawsuit with prejudice (meaning he can't sue again regarding this matter) and another suit failing in the Third Circuit federal appeals court.

And yet, Trump continues to invite more humiliation. He continued to rant on Twitter, promising, "We have some big things happening in our various litigations on the Election Hoax." (Whoever he means by "we," they do not.)

Worse yet, Trump has an army of liars at his disposal: The right-wing punditry, spread out across radio, TV and the internet, is largely bolstering these utterly false claims that the election was "rigged" and that Trump will somehow prevail in his efforts to steal the White House.

There are multiple reasons for this. Trump's black hole of an ego makes it impossible for him to admit he lost the election, first of all. Most right-wing pundits are increasingly consumed by an authoritarian ideology that's opposed to democracy, and they view these lies as a good way to undermine public trust. Republican politicians are eager to delegitimize Biden's presidency, and also to lay the groundwork for more voter suppression tactics. By falsely accusing Democrats of cheating, in other words, Republicans create cover for their real-life cheating.

But as is usually the case with right-wing politics in the 21st century, a lot of this is about money. Trump's voting base is a sea of suckers. He and the various grifters who make up most of the right-wing media are eager to drain those suckers dry. Stoking anger over the lost election and feeding people's fantasies about stealing it is, by all appearances, a cash bonanza.

On Sunday, New York Times media columnist Ben Smith published a profile of Chris Ruddy, CEO of the Trump-tastic website and TV network Newsmax. As the headline suggests — "The King of Trump TV Thinks You're Dumb Enough to Buy It" — the profile is not a flattering one. Instead, it depicts Ruddy is knowingly pumping out lies about the election, because doing so is dramatically increasing ratings and traffic, and making him a fortune.

Ruddy claimed he's justified in spreading misinformation for cash, insisting to Smith that the rest of the media also hypes lies and bullshit to make money. (Ruddy's example of this, however, is "this Russian hoax theory," which is neither a hoax nor a theory, but a substantial scandal that, in a healthier political environment, would have led to Trump's removal from office years ago.)

Ruddy is far from the only one who sees a lucrative opportunity in peddling lies to America's would-be brownshirts about Trump's glorious assault on democracy — disingenuously packaged as "stop the steal", since all things with the right are projection — and how it will ultimately succeed.

As Media Matters documented last week, a hive of right-wing grifters are blitzing their followers by email, demanding they turn over their grandkids' college fund to this effort to overturn the election results.

Charlie Kirk, Alex Jones, Candace Owens and many other right-wing parasites are hammering their lists of subscribers and supporters with pitches like, "Will you help me fight with President Trump and ensure only legal votes are counted? Rush $25 right here," and "One thing is clear: the fraud was happening everywhere, and there is a lot of it that still needs [to be] exposed," all for the low, low price of $25 (or more).

Of course, the biggest grifter is Trump himself, who has been sending his followers dozens of emails a week, begging for cash and promising that it will be used to stop the "Radical Left and Fake News Media," who "will do whatever it takes to try to STEAL the White House." (More projection!) The emails are full of lies about how their donation will somehow be improved a thousandfold, through mechanisms that are not explained.

Where's the money going? It's not being lavishly spent on this go-nowhere fight to snatch Biden's victory away, that's for sure. For instance, a statewide recount of Wisconsin was expected to cost Trump $8 million. Instead of paying full price, however, the campaign chose to recounting two counties for $3 million.

This penny-pinching has an obvious purpose: It allows Trump to reroute the money raised away from his failed coup attempt into a leadership PAC that he can use as a slush fund, just as he did with the Trump Foundation in years past. Far from being able to "increase your impact by 1000%," as the emails promise, the money donated will likely go towards Trump traveling and throwing himself a bunch of parties for the next few years.

No one should shed a tear for the fools being parted from their money, especially since said fools imagine they're funding an authoritarian coup aimed at ending free and fair elections. Nonetheless, this entire grifting empire is a big problem, because the end result of all this profiteering is that our democracy is being undermined. As Trump and his buddies cash in, their reckless rhetoric is encouraging their followers to grow ever more hateful towards the rest of Americans — the majority of Americans — who continue to believe in democracy.

As Heather Digby Parton wrote Monday at Salon, "standard conservative victimhood is changing into something else with Trump's crusade to delegitimize the election and convince tens of millions of people there is a conspiracy to disenfranchise them."

This narrative is already being used to justify illegal and fascistic power grabs and election cheating. We're already seeing signs of it in the way Georgia's Republican donor base has been haranguing politicians in that state to do more to help Trump steal the election. That won't work for Trump, at least not this time around, it could certainly lay the groundwork for pushing out the few remaining honest Republicans in power and passing more policies targeted at keeping Black voters from the polls.

It's also ramping up the aggression of some of the more unsavory people in the Trump base. In Raleigh, North Carolina, this weekend, there was an ugly demonstration by a group of Trump supporters insisting that his lies about the election were true. The rally was flush with Proud Boys, who wore insignia declaring their eagerness for violence and yelled at counter-protesters that they wanted to "exterminate" them. This kind of baseless anger suggests that it's a matter of when, not if, there's another terrorist attack by a Trump fanboy.

There's little chance of Trump or his enablers letting up between now and Inauguration Day, which is still more than seven weeks away. There's clearly too much money to be made by endlessly promising Trump voters that they're on the verge of stealing this election from Biden, and that another $25 is all it will take to get Trump a second term. Apparently, not even the routine humiliation of losing court battles and recounts will slow down the grift train — not as long as the American right is still composed of a bunch of suckers.