Six months later: What have we learned from Jan. 6? Not enough to stop it from happening again

A new phase of America's endless civil war was launched six months ago. We don't yet know how or when it will end 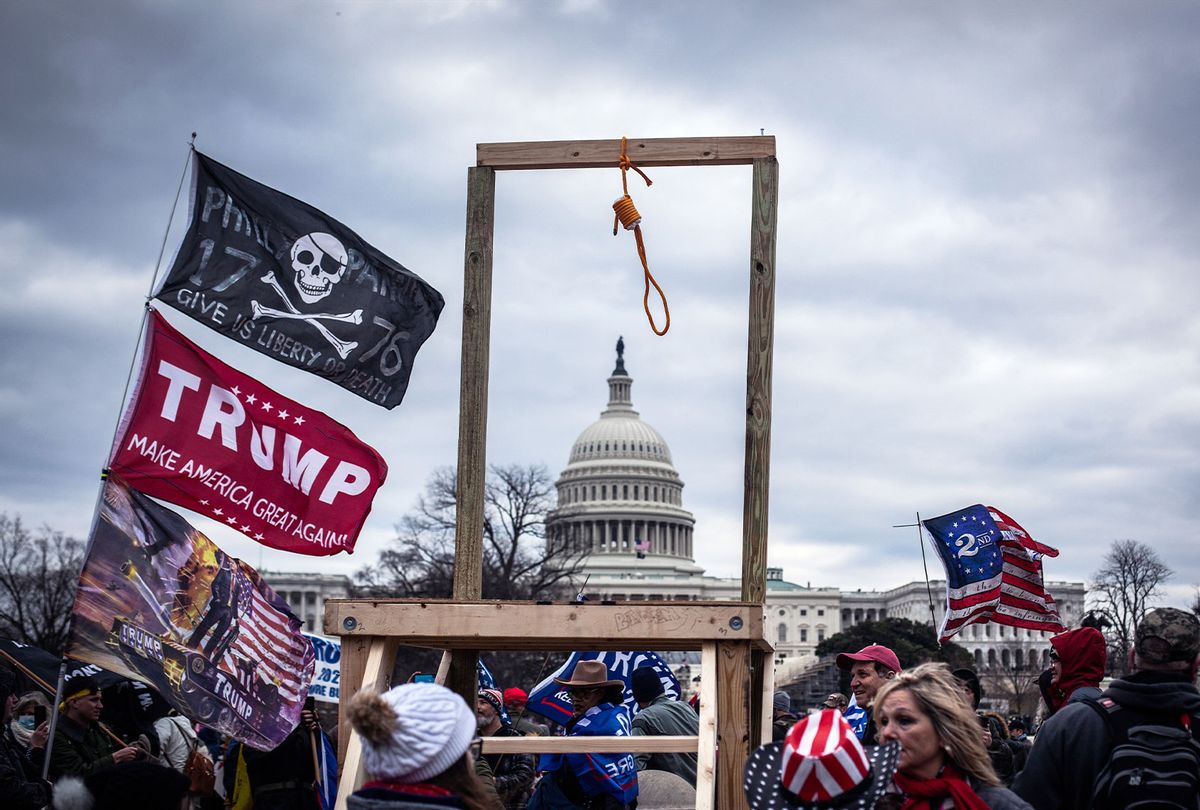 Trump supporters near the U.S Capitol, on January 06, 2021 in Washington, DC. The protesters stormed the historic building, breaking windows and clashing with police. Trump supporters had gathered in the nation's capital today to protest the ratification of President-elect Joe Biden's Electoral College victory over President Trump in the 2020 election. (Shay Horse/NurPhoto via Getty Images)
--

Six months have passed since the historic and horrible events of Jan. 6, 2021. What have we learned since then?

More than 550 members of Donald Trump's attack force have been arrested, including nearly 40 charged with conspiracy. The ringleaders, including Donald Trump and his inner circle, who instigated, funded and organized the attack on the Capitol have not been punished. Given the Department of Justice's timid approach to investigating and prosecuting the Trump regime's many obvious crimes, it is unlikely they ever will be.

Trump and his Republican Party's plot to overthrow the government by nullifying the results of the 2020 presidential election were far more extensive — and far more likely to succeed — than was previously known.

Public opinion polls show that a growing number of Americans simply want to "move on" from the events of Jan. 6. Predictably, this is especially true of Republicans.

There will be no bipartisan committee to investigate what happened that day. The Republican Party has obstructed such investigations because of its obvious guilt and complicity. Instead, House Speaker Nancy Pelosi will convene a select committee, which will presumably have less power and authority than a proper commission.

Those who want to move on have deluded themselves into the fantastic belief that climbing into the memory well will magically keep them safe. In reality, the memory well is a type of purgatory or prison.

In keeping with how fascism spreads in a failing democracy, Trump and his propagandists are now elevating right-wing terrorists into "heroes" and "political prisoners" who should be freed from prison immediately. But the most important fact remains unchanged: The events of Jan. 6 were a trial run, and proof of concept. If the Republican Party loses a presidential election in the future, we will in all probability see a second coup — and it will likely be successful.

These last six months have also been a time of public events, commemorations and other important dates that signal to an American story of violence, freedom won in blood, racism and white supremacy, destruction and creation, freedom dreams and authoritarian nightmares — with the color line intersecting it all.

Specifically, in that time we have seen the 100th anniversary of the Tulsa white-on-black race massacre, the one-year anniversary of the police murder of George Floyd and the nationwide protests that followed, the first Juneteenth to be a national holiday, and the first Memorial Day and Fourth of July since the Capitol attack.

On this, James Baldwin wrote in 1963 that "American history is longer, larger, more various, more beautiful, and more terrible than anything anyone has ever said about it."

In total, America's unresolved history its and accompanying need for a moral reckoning gave birth to the befouled creature that is Trumpism and American neofascism — and continues to give it life. In the maelstrom of this half-year there was an important moment that received little attention, but that explains much about the events of Jan. 6, the motivations of the attackers and coup plotters, and the likelihood that such political violence will happen again.

On June 29, the House of Representatives voted to remove Confederate statues on display in the Capitol. All Democrats voted in support of the bill. Most Republicans voted against it. It will now go to the Senate where the Republicans will almost certainly kill it with the filibuster.

Of course, those who defend displaying Confederate statues in the home of American democracy, and in public places more generally, will summon up intellectually dishonest claims about how such objects represent "history" and "heritage," perhaps even a "noble cause." They may also offer nonsense claims that the treasonous cause of the Confederacy was about "states' rights" instead of about protecting the vile institution of white-on-black chattel slavery.

The Confederacy was dedicated to white supremacy, racial authoritarianism and a particular kind of "white freedom" in which the human rights of Black and brown people were not to be respected. Today's Republican Party — in which the Southern slaveocracy and Jim Crow South have been reborn — largely shares the same values and beliefs, albeit presented in a different (and less honest) form.

When Trump's followers launched their lethal attack on the Capitol, some waved Confederate flags, which are symbols of white supremacy and hatred. The Trump attack force wore and displayed other white supremacist symbols and regalia. Many carried crosses to symbolize their commitment to the fascist "Christian identity" movement. It is no coincidence that open white supremacists including Nazis, Ku Klux Klan members and other right-wing paramilitary groups played such a prominent role on Jan. 6.

Trump's attack force was not just attacking the rule of law and the Constitution, but also the idea of multiracial democracy itself. Those who have been arrested have repeatedly told law enforcement that they were acting out of "patriotism". The traitors in the old Confederacy used similar language.

Because it can no longer win free and fair elections, the Jim Crow Republican Party is trying to keep Black and brown people from voting. To that end, in nearly all states Republicans have proposed anti-democracy laws that disproportionately target Black and brown people and other members of the Democratic Party's base. This new Jim Crow apartheid is explicitly designed to subvert the people's will and to rig elections so that Republicans — the world's largest white supremacist political organization — literally cannot lose. As in the old Confederacy, the ultimate goal is to create a type of white "Christian" plutocracy and racial authoritarian state.

The Republican Party and the larger white right's moral panic about "critical race theory" (which in practice means any substantive and truthful discussions of racial and social inequality) is an attempt to literally whitewash American history in the service of white supremacist fantasies. The Confederacy and its loyalists did much the same thing. That project continues in the present.

Moreover, what the Jim Crow Republicans and other neofascists now describe as "patriotic education" is in practice white supremacist Orwellian brainwashing. As seen in Florida and elsewhere, those who dissent from such a regime will be punished for thoughtcrimes.

The Republican Party's commitment to the neo-Confederate cause is not something being imposed on its voters and followers by outside forces. Public opinion polls and other research shows that white Republicans (and especially Trump supporters) are committed to white racial authoritarianism, are afraid of the "browning of America." and subscribe to the paranoid view that they are somehow being "replaced" by Black and brown people. These same fears motivated white Southerners during white-on-black slavery and through to the end of Reconstruction and beyond.

A 2019 Economist/YouGov poll reported that 53% of Republican voters believed Donald Trump was a better Republican president than Abraham Lincoln.

The thousands of Trumpists who attacked and overran the Capitol on Jan. 6 wore their signature red MAGA hats and other markers of loyalty to the Great Leader and his neofascist cause. Those red hats were not something outside of American history or entirely without precedent. More than a century ago their forefathers — in spirit, and in some cases  literally as well — donned red shirts and other garments to symbolize their dedication to white power as they engaged in a campaign of terror against free Black Americans and their white allies during Reconstruction and after.

Writing at the Daily Kos, journalist David Neiwert connects that past to Trumpism and white supremacy.

Banning the Klan simply did not work. Southerners instead began forming "rifle clubs" whose purpose was in fact to sow political terror. The participants in these clubs began wearing bright blood-red shirts as a way of mocking the "bloody shirts" supposedly waved about by their Northern foes. Thus, the Red Shirts came into being.

Southerners called their strategy — which essentially entailed overthrowing Reconstruction-era Republican rule by means of organized threats of violence and suppression of the black vote — "the Mississippi plan," whose name came from the violent skirmishes that broke out in Vicksburg, Mississippi, which culminated in the deaths of several hundred black people and the assassination of the black sheriff. Similar strategies emerged when organized whites staged a coup in Louisiana that ultimately overthrew the Republican governor, as well as a "race riot" in Alabama that achieved similar results for Barbour County.

However, it was in the Carolinas that the Red Shirts became a notable presence that persisted for decades. In the 1876 elections, an organization of Red Shirts from both South Carolina and Georgia converged on the border town of Hamburg (which no longer exists) to provoke a bloody confrontation that culminated in the massacre of a number of black freedmen, many of them executed in cold blood. Even worse violence broke out in Ellenton, South Carolina, resulting in the deaths of dozens of black people. …

However, the Red Shirts were far from finished. They remained an active voice in Southern politics for another two decades, in every instance serving to threaten and intimidate black voters, passing Jim Crow laws and then enforcing them through both legal and extralegal means.

Neiwert warns that the descendants the Red Shirts are visible around us today amid the Three Percenters, the Proud Boys, the "patriot" movement and elsewhere, with the identical aim of depriving disadvantaged groups "with long histories of political oppression their access to the political and legal franchise."

The Confederate army could never conquer Washington and overrun the Capitol. On Jan. 6, Trump's forces were able to accomplish that goal within a few hours. Their victory served as inspiration and fuel for the American fascist movement. They will never forget that day and their triumph.

And what about those other Americans, who have convincing themselves that organized forgetting offers safety and salvation? They will soon learn that it does not.