Our first Memorial Day since Trump's coup: Is America ready to move forward — or stuck in reverse? 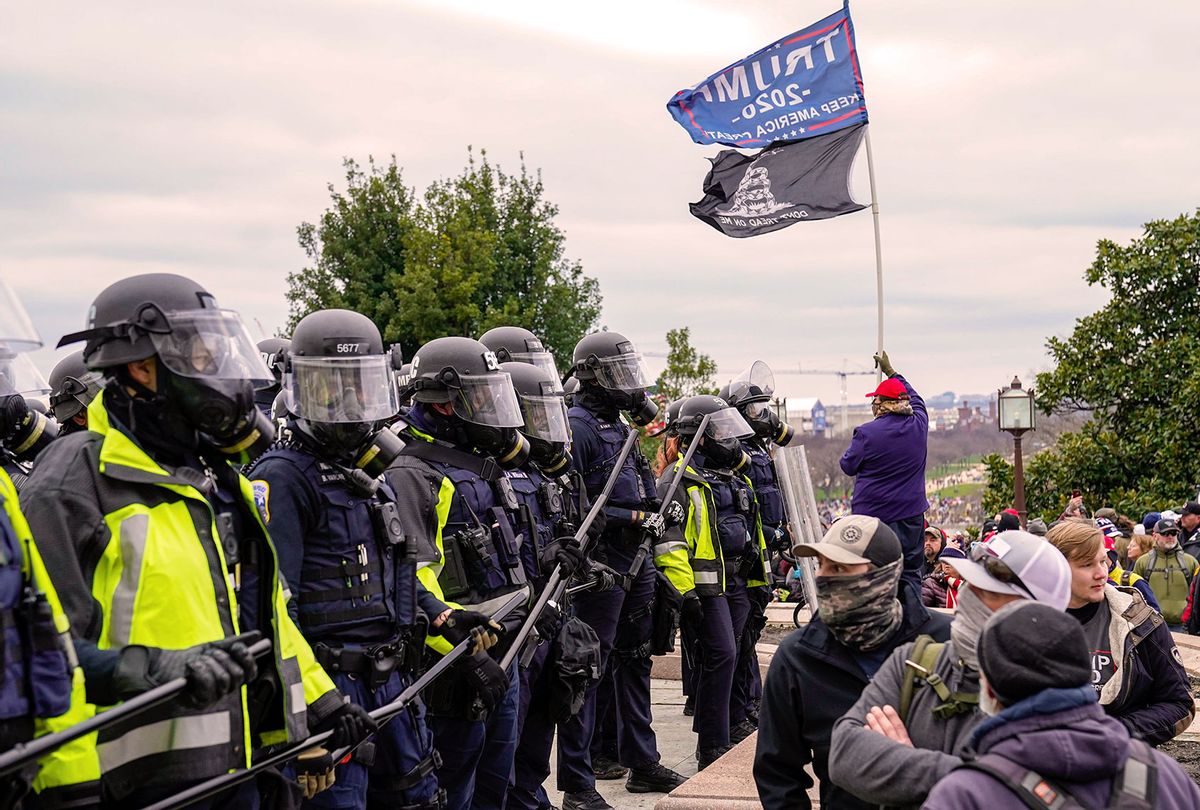 Capitol Hill police hold back protesters as crowds gather outside the U.S. Capitol for the "Stop the Steal" rally on January 06, 2021 in Washington, DC. Trump supporters gathered in the nation's capital today to protest the ratification of President-elect Joe Biden's Electoral College victory over President Trump in the 2020 election. (Robert Nickelsberg/Getty Images)
--

American history is a mess. None of this is simple. These last days of May 2021 contain a powerful convergence of dates and events.

This Memorial Day coincides with the 100th anniversary of the white supremacist pogrom in Tulsa, Oklahoma. In that literal and symbolic attack on Black America's prosperity and freedom, hundreds of Black people were murdered and hundreds of millions of dollars in income and wealth were destroyed and stolen.

It has also been just over a year since George Floyd was publicly murdered by a white police officer in Minneapolis, in the 21st-century equivalent of a lynching. Floyd's murder became one of the principal sparks for a summer of protest and a nationwide people's uprising for civil rights and human freedom and dignity.

This is also the first Memorial Day since Donald Trump's attempted coup and his supporters' attack on the U.S. Capitol in January, when they overran and defiled the literal heart of democracy. Last Friday, Republicans in the Senate voted against a full investigation of the crimes of that day — and in doing so effectively admitted to being co-conspirators with Trump and his followers.

Tyler Stovall, author of the new book "White Freedom: The Racial History of an Idea," told me by email how he makes sense of these events. "The confluence of these dates underscores the ways in which ideas of freedom and of race are intertwined in America, past and present," he wrote. "It also shows how Americans are becoming more and more conscious of the African American presence as central to this country."

Any major moral reckoning and campaign of democratic renewal — which America surely needs — would take place in the context of a nation whose history and present are messy, complicated and contradictory. This is especially true, as Stovall's book suggests, of the color line, a story of change and reaction, push and pull, progress forward and stumbling or falling backward.

There have been three revolutions in America. The first established the country. The second was the Civil War, the end of white-on-Black chattel slavery and the first blossoming of multiracial democracy during Reconstruction. The third American revolution saw the long Black Freedom Struggle tear down the de jure white supremacy of Jim and Jane Crow.

These revolutions were confronted by white rage, white backlash and in at least one example a white counterrevolution. After Reconstruction, that counterrevolution was so strong that a 100-year reign of white supremacist terror and a de facto police state was established across the South and in other parts of the country.

If there is a fourth revolution or second Reconstruction to protect America's still-nascent multiracial democracy from the new Jim Crow politics of the Republican Party and the larger neofascist movement, it will be met with a titanic response from white reactionaries and others invested in defending white supremacy at any cost. As public opinion and other research has shown, many white Americans would rather live under an authoritarian regime than share equal political and social power with black and brown people.

Since it was first published in the New York Times 10 years ago this week, I always make time on Memorial Day to read historian David Blight's essay on the origins of the holiday.

In "Forgetting Why We Remember," Blight wrote:

But for the earliest and most remarkable Memorial Day, we must return to where the war began. By the spring of 1865, after a long siege and prolonged bombardment, the beautiful port city of Charleston, S.C., lay in ruin and occupied by Union troops. Among the first soldiers to enter and march up Meeting Street singing liberation songs was the 21st United States Colored Infantry; their commander accepted the city's official surrender.

Whites had largely abandoned the city, but thousands of blacks, mostly former slaves, had remained, and they conducted a series of commemorations to declare their sense of the meaning of the war.

The largest of these events, forgotten until I had some extraordinary luck in an archive at Harvard, took place on May 1, 1865. During the final year of the war, the Confederates had converted the city's Washington Race Course and Jockey Club into an outdoor prison. Union captives were kept in horrible conditions in the interior of the track; at least 257 died of disease and were hastily buried in a mass grave behind the grandstand.

After the Confederate evacuation of Charleston black workmen went to the site, reburied the Union dead properly, and built a high fence around the cemetery. They whitewashed the fence and built an archway over an entrance on which they inscribed the words, "Martyrs of the Race Course."…

The war was over, and Memorial Day had been founded by African-Americans in a ritual of remembrance and consecration. The war, they had boldly announced, had been about the triumph of their emancipation over a slaveholders' republic. They were themselves the true patriots.

It's a tragic, heroic and inspiring historical anecdote. But this Memorial Day feels unmistakably different to me, Blight's words are now colored and shadowed by Trump's coup attempt and the Capitol attack.

At its core, the events of that ignominious day were an attempt to overturn multiracial democracy and to advance the cause of American apartheid. Trump's white rage mob carried Confederate flags and a white Christian fascist cross. There were Nazis, Kluxers and other open white supremacists and paramilitaries (and others obviously sympathetic to their cause) leading the assault on Congress.

The Capitol Building itself was built by Black human property. Black and brown police officers fought back against Trump's brigands. Once Trump's forces breached the defenses, they rampaged and ran amok, sometimes hurling racial slurs at Black police officers who risked their lives to protect members of Congress and their staff from being assaulted or perhaps killed. Some members of the white-rage mob smeared feces on the walls of the Capitol building and urinated on the floor. Black and brown maintenance people would then be tasked with cleaning up white America's mess — a job that black and brown people have been doing for centuries from slavery to freedom as we repair and renew the country's democracy.

Ultimately, on this Memorial Day, with all these important coincidences of events and dates that intersect with it and surround it, I keep asking: What kind of country is this? What kind of democracy? What kind of nation is being forged in this historical moment? What will freedom look like in this new America?

To admit this is almost a sin for people who write and think in public, but my answer is clear: I don't know.

One can draw upon the wisdom of the Black prophetic tradition and Dr. Martin Luther King Jr.'s inspiration and warning that the arc of the moral universe bends towards justice — but that same arc of justice can encounter walls, mazes, mirrors and other obstacles along the way. Moreover, we cannot know how long that journey to justice will be, or whether we will be alive to witness its destination.

I asked Tyler Stovall for his thoughts on what a new American reckoning should accomplish. He offered some hopeful clarity: "I would underscore two issues. One, a rejection of Republican voter suppression which aims at the preservation of 'the white to vote.' Two, a commitment to reparations for the descendants of African American slaves. These two acts would show me that America has definitely moved beyond white freedom."

But perhaps I know one thing with certainty about such a reckoning. History is a great teacher, and it tells us there will be tremendous white rage and white backlash in response to any American reckoning that aims to save multiracial democracy — and there will also be resistance and struggle and dignity by Black and brown people in response to that white backlash and rage.

Almost on cue, the Department of Homeland Security announced last week that the 100-year memorial and other remembrance ceremonies for the Tulsa massacre may be targeted by white supremacists or other right-wing terrorists.

In too many ways, that tension and that possibility, suspended between hope and violence, is the story of America from before the founding through to the 21st century — and likely beyond.