Trump cranks it up at CPAC: Why raising the spectacle of right-wing madness right now is so scary

While there is nothing new under the right-wing sun, Trump is still trying to up the ante 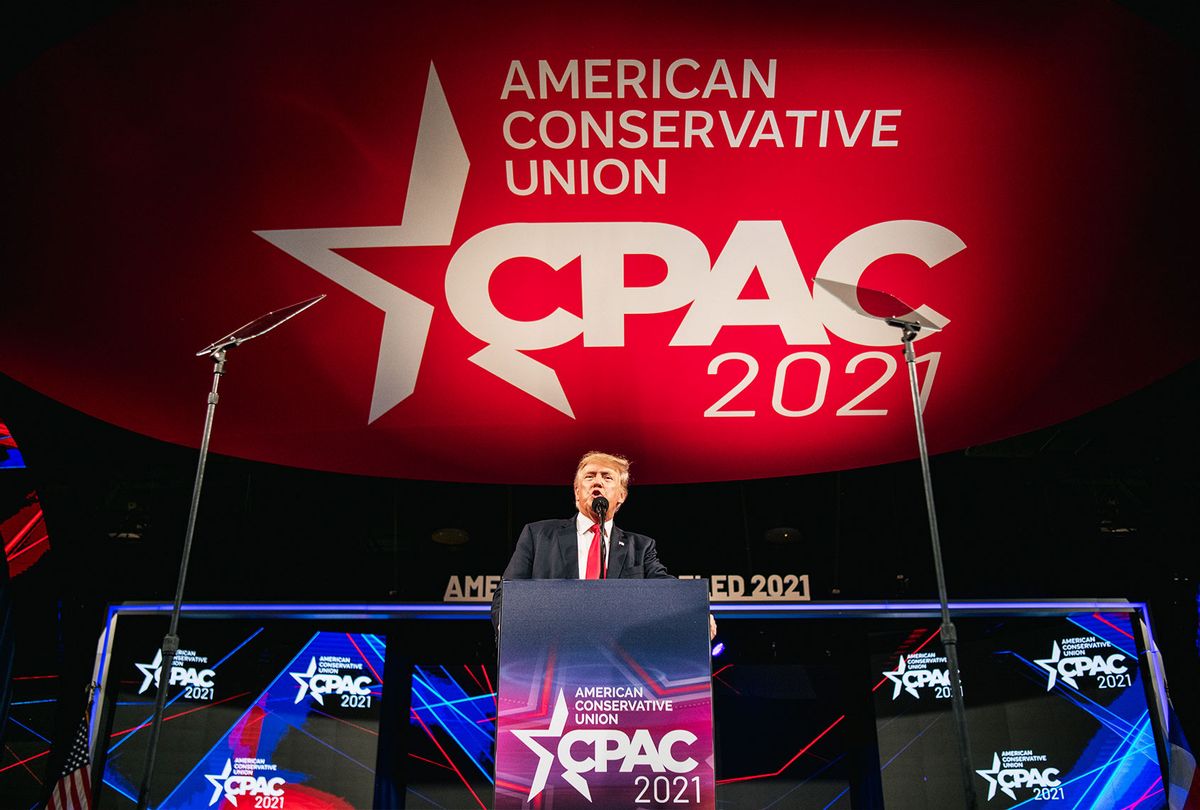 Former U.S. President Donald Trump speaks during the Conservative Political Action Conference CPAC held at the Hilton Anatole on July 11, 2021 in Dallas, Texas. CPAC began in 1974, and is a conference that brings together and hosts conservative organizations, activists, and world leaders in discussing current events and future political agendas. (Brandon Bell/Getty Images)
--

Every revolutionary movement needs a martyr and it appears that the MAGA revolution has finally found one for itself.

Ashli Babbit, the Jan. 6th insurrectionist who was shot by a security guard as she climbed through a broken window just a few feet away from members of Congress, is Donald Trump's Horst Wessel, the German brownshirt who was murdered in 1930 and turned into a martyr by the Nazi propaganda chief Joseph Goebbels. Trump himself is making the case for Babbit, having mentioned her in every appearance he's made in the last week.

At his recent Florida rally, Trump wondered: "Who shot Ashli Babbit? We all saw the hand... Now they don't want to give the name." At his press conference on Wednesday in which he announced his laughable "class action" lawsuit against the Big Tech companies, he went a little bit farther saying, "there were no guns in the Capitol except for the gun that shot Ashli Babbitt. And nobody knows who that man were...the person that shot Ashli Babbitt right through the head, just boom. There was no reason for that." Then this past weekend he went all the way, describing the insurrection as a love fest and Babbit as an innocent victim in an interview with Fox Business host Maria Bartiromo:

Bartiromo took the ball and ran with it, saying that Babbitt climbed out of a broken window (as if she was trying to escape the vicious gunman) after which both she and Trump speculated that the officer who shot Babbitt was part of a Democratic official's security detail, casually mentioning Chuck Schumer in the process. The implication was obvious: the Democrats shot Ashli Babbitt for no good reason. The fact that we have all seen the footage of the shooting is irrelevant: We can believe them or we can believe our lying eyes.

Over the weekend, Trump appeared at his second CPAC conference in five months — this time in Texas. (Salon's Zachary Petrizzo delivered these dispatches from the event.) Trump gave his usual speech, to a notably more excited crowd than the last one in February in Florida. He's barely able to keep from announcing to his adoring fans that he's running again and they are all clamoring for him to do it. And it's clear that he will be running to avenge his bogus claims that he actually won the election. The Big Lie will never die.

It all sounds bizarre but when you talk about this stuff in the context of CPAC, it is really not all that crazy. Sure the violent insurrection gives their standard reckless rhetoric a feeling of urgency that wasn't there before, but if you look back you can see that's been there for decades.

Back in 1973 when the American Conservative Union (founded in 1964) first started holding these get-togethers, the GOP was in terrible disarray in the wake of Watergate and far-right organizers saw an opportunity to reshape the party in their conservative image. They invited Ronald Reagan to give the first keynote and the "New Right" never looked back.

CPAC has always been used as a way to take the temperature of the party activists and in that way, it's very instructive. The straw poll that's taken every year (or now, every few months, apparently) has not always been predictive of the party's nominee, but it shows what ideas and issues most excite the base. It's almost certain that the feedback loop between this group and the right-wing media guides the party as much as party officials and pollsters do. For the first quarter-century, the conference was an ideological gathering designed to promote the conservative movement agenda of anti-communism, small government, strong military, Christian Right values, low taxes, etc. But with the rise of the right-wing media — first talk radio, then Fox News — by the turn of the century, it became much more of a right-wing celebrity spectacle that sought to shock the political media, which loved to cover it since it was always held in DC. (This is the first year they've ever held the event outside of DC.) In fact, for the past 20 years, CPAC was basically the same circus that Trump took on the road for his beloved rallies. During the Bush years, politicians showed up and there were panel discussions of issues but the stars of the show were people like Ann Coulter, who pretty much made her name at these events. And they said things which, looking back, make January 6th seem inevitable.

At the 2002 meeting, Coulter said, "we need to execute people like John Walker in order to physically intimidate liberals, by making them realize that they can be killed, too, otherwise, they will turn out to be outright traitors." A few years later she made news again with another notorious speech:

On Democrats: "Someday they will find a way to abort all future Boy Scouts."

Her post-9/11 motto: "Rag head talks tough, rag head faces consequences." For good measure, she threw in a joke about having Muslims burn down the Supreme Court — with the liberal justices inside.

Then came questions. A young woman asked Coulter to describe the most difficult ethical decision she ever made. "There was one time I had a shot at Bill Clinton," Coulter said.

She meant that literally. Meanwhile, down in the bowels of the hotel hosting CPAC, they sold merchandise with adorable sayings such as "Happiness is Hillary Clinton's face on a milk carton" and "Rope. Tree. Journalist. Some Assembly Required." At the next year's event, Coulter said, "I was going to have a few comments on the other Democratic presidential candidate, John Edwards, but it turns out you have to go into rehab if you use the word 'fa**ot,'" and when she was rebuked for saying it, she called it "speech totalitarianism."

There is nothing new under the right-wing sun.

In recent years, some of the acts were scrapped. Coulter was not invited in 2015, and in 2017 the right-wing provocateur Milo Yianopoulos was canceled when it was revealed that he had made positive statements about pedophilia. They were no longer needed anyway. The show was by then dominated by Donald Trump who had made his first big political splash there in 2013 spreading the "birther" lie, which the attendees ate up with a spoon. And while Coulter climbed her way back to CPAC this weekend, participating on an obscure panel going on about immigration and making grotesque racist statements, as usual, her act doesn't shock anymore and nobody cares. Who needs Coulter anyway when you have Trump?