Young Democrats are right: There is no reason to date or befriend Trump voters 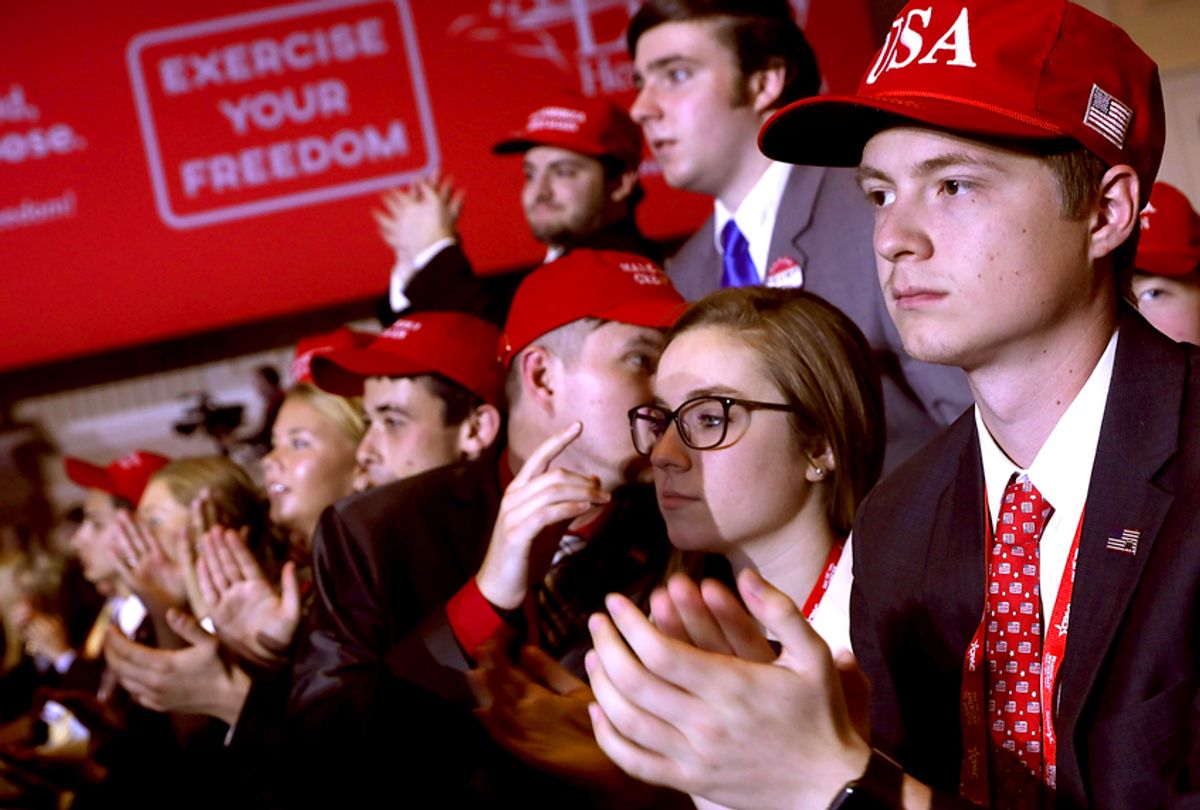 You have to give it to Axios: They know how to throw out some tasty bait. Their latest is irresistible for conservatives, who love any story that frames them as victims, and gives them the chance to blame the left for "incivility." Never mind obvious counter-examples such as the storming of the Capitol, gun-waving Christmas cards, and the entire person of Donald Trump.

On the right, there was a lot of trumpeting how this supposedly proves the left are the ones who are "really" intolerant. Radio talker Matt Murphy whined that liberals "don't believe in our republic cannot abide people who think differently than them." As if not getting to have sex with or go to parties with liberals is exactly the same as having your basic rights as a citizen stripped from you. "This doesn't bode well," complained GOP lawyer and ABC commentator Sarah Isgur, who previously defended the Trump administration's policy of separating families at the U.S.-Mexico border as a former spokesperson in the Justice Department.

RELATED: Young Trump staffers say they are having a hard time dating

"My most fascinating friendships have always come from 'the other side,'" MSNBC host Joe Scarborough tweeted, noting that, as a Republican, he "always benefitted" from those conversations. As many people pointed out in response, however, that a Republican like Scarborough gained from friendships with people like "John Lewis, Elijah Cummings, Ron Dellums, and Maxine Waters" doesn't mean the reverse is true. And that is most likely what this polling is picking up.

This is about desirability, not "tolerance." Democrats are desirable as friends and lovers, not just to their fellow party members, but to Republicans, as well. But Republicans? They apparently don't have much to offer to Democrats as friends, and certainly not as lovers. Digging into the polling shows why this is.

As the Axios write-up by Neal Rothschild notes, young Democrats believe that GOP positions "spearheaded by former President Trump — are far outside of the mainstream and polite conversation." In particular, "human rights, and not just policy differences, are at stake." Which, no duh. Just last week, the GOP-controlled Supreme Court made it clear they plan to strip basic bodily autonomy rights from everyone with a uterus. The Republican Party is rallying around violent and white supremacist rhetoric.

Relatedly, a Harvard poll from last week shows "[m]ore than half of young Americans feel democracy in the country is under threat, and over a third think they may see a second U.S. civil war within their lifetimes." This isn't about a dispute over marginal tax rates. If you — quite correctly — believe that Republicans are plotting to destroy democracy, then why would you want to be friends with people who support that?

Unsurprisingly, female Democrats were more likely than male Democrats to reject dating someone who "voted for the opposing presidential candidate," i.e. Trump. Which isn't just about personal taste, but safety. Trump not only bragged about how he likes to "grab 'em by the pussy," but has a long track record of aggressively defending men who have been accused of sexual or domestic violence. It's just common sense to refuse to be alone with men who are fine with that attitude, and no different than watching your drink at a party or having a friend walk you home at night. In addition, having sex with men who back the party of forced childbirth is just ill-advised.

And that gets to the crux of it: Dating and friendship aren't about merely tolerating someone, it's about inviting someone into your life, as a confidante or even on an intimate level. Relationships take work to maintain. Why waste that effort on someone who can't meet the baseline requirement of seeing you or the other people in your life as full human beings? And no, being "personally" pro-choice or pro-LGBTQ rights hardly counts, when you keep voting for the party that opposes both.

RELATED: Bari Weiss' field of right-wing dreams: Will the "University of Austin" ever actually exist?

The anger on the right over this polling, in turn, shows that this isn't really about liberal "intolerance," but an ugly sense of entitlement among conservatives. It's fueled by a belief that they should be as obnoxious, cruel, and bigoted as they want, without having to pay any social penalty for it. That attitude is especially troubling when it comes to dating, and is tied to long-standing sexist assumptions that women owe men their time and attention, even when they don't find them attractive. Indeed, this entitlement itself is a red flag. Someone who doesn't respect the right to choose who you spend time with is someone who is likely to violate other boundaries.

That's what all this whining and crying about "cancel culture" from the right is about. It's very rarely, if ever, about actual government censorship. On the contrary, conservatives are all for government censorship, especially of books and other materials that tell the truth about American racism. Conservatives are angry rather over the social penalties for their repulsive opinions, like being criticized publicly, being excluded from certain conversations, and generally being disliked. It's conservatives in D.C. whining to the press that they can't get hot dates.

Sure, conservatives can and occasionally entertain the idea of creating their own social networks and even universities, so they can hang out with each other, instead of constantly demanding attention from liberals. But apparently, they don't like each other's company any more than liberals do, and so they always circle back to yelling at liberals, accusing the left of "intolerance" for finding right-wingers unpleasant people to be around.

Ultimately, however, it comes back to this: No one is entitled to anyone else's social attention or friendship, much less a dating relationship with them. If friendships and romantic relationships with progressive are so desirable — which, as a progressive, I totally agree is true! — then the way to obtain them is to suck less. (Which yes, starts with not voting for Donald Trump.) The strategy of whining about "cancel culture" and scolding Democrats for "intolerance" isn't going to open up those cocktail party invitations any faster. Yelling at people to like you isn't a way to be liked. It just reaffirms to progressives that, for mental health reasons, time exposed to right-wingers is best kept at a minimum. Good on young Democrats for seeing clearly what the Joe Scarboroughs of the world don't want them to see.