2022 Republican primaries: Who will take gold in the Misogyny Olympics?

With Trump's help, the GOP primary season is offering a rogue's gallery of chauvinist pigs and accused abusers 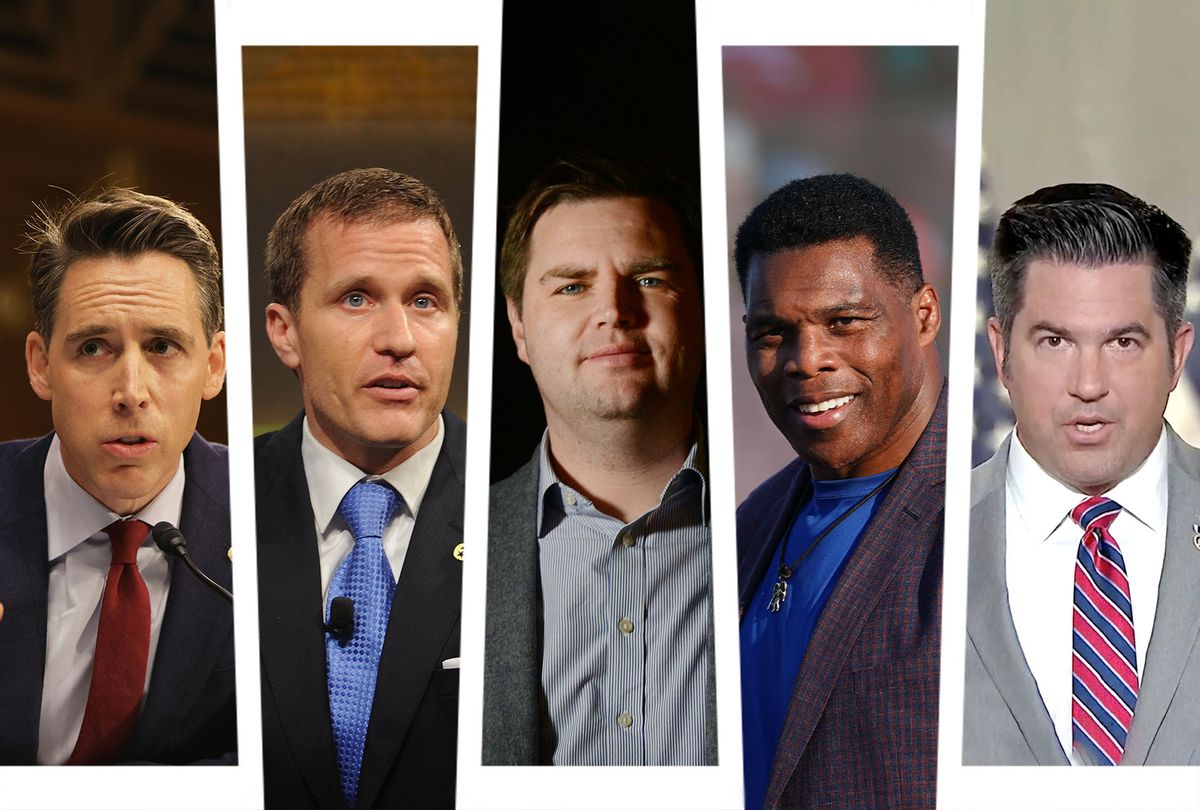 During the 2016 presidential campaign, the Republican Party was embarrassed when a tape of Donald Trump was released in which the then-GOP nominee saw heard bragging about sexual assault with the memorable lines "grab 'em by the pussy" and "when you're a star, they let you do it." In 2021, however, what was once a cringe moment for the GOP has now become an ethos, and not just because of Sen. Josh "Make Me a Sandwich" Hawley of Missouri's pre-campaign sermonizing on a delusional gospel of masculinity. With a heavy assist from Trump himself, the candidate field for the 2022 GOP primaries is thick with devotees of the Church of Pussy Grabbing.

There hasn't really been a frontrunner in the closely-watched Pennsylvania GOP primary for the state's open U.S. Senate seat, so it was a big deal in September when Trump stepped in to endorse Sean Parnell, an Army vet running to replace retiring incumbent Sen. Pat Toomey. In an unsurprising twist, Parnell's ugly divorce has produced some headline-grabbing testimony from his ex-wife about the their marriage.

"In tearful testimony, Laurie Snell told a family court judge that her husband once called her a 'whore' and a 'piece of s—' while pinning her down," the Philadelphia Inquirer reported earlier this month. Snell also testified that Parnell had hit their children hard enough to leave marks, had punched a door into a child's face and had once choked her until she bit him to get away. Parnell, of course, denies all of it, but consider a segment he once did on Fox Nation, unleashing a misogynist rant to equal anything you'd read one of the many grotesque "incel" or "men's rights" forums on the internet.

"I feel like the whole 'happy wife, happy life' nonsense has done nothing but raise one generation of women tyrants after the next," Parnell said. "Maybe it is just now there is an entire generation of men that don't want to put up with the BS of a high-maintenance, narcissistic woman."

"I look at women on Instagram, when I stumble across their pages, and the No. 1 thing that turns me off is all the duck-billed selfies. The narcissistic duck-billed selfies," he continued. It's worth watching the video just to capture how angry Parnell is, and how his rhetoric directly echoes the "piece of sh*t" and "whore" language his wife has accused him of using.

.@SeanParnellUSA said: "It used to be, you know, women were attracted to your strength because you could defend them from dinosaurs." pic.twitter.com/oQjQznZKie

"Once a woman has been strangled by her partner, the likelihood that he will strangle her again rises tenfold. The likelihood that he will murder her rises nearly eightfold," Moira Donegan reports in the Guardian. Trump scheduled a fundraiser for Parnell at Mar-a-Lago in the days after Snell's testimony. And why not? Trump reportedly nicknamed Steve Bannon "Bam Bam," a reference to Bannon's own history as an accused domestic abuser.

Parnell is just one of a number of candidates Trump is supporting, who face allegations of violence against women, as Matt Shuman of Talking Points Memo reported Wednesday. Trump is enthusiastically backing former football star Herschel Walker in the GOP primary for the Georgia Senate seat currently held by Democrat Raphael Warnock, despite accusations by Walker's ex-wife of "physically abusive and extremely threatening behavior," including multiple threats to kill her. Another woman has accused Walker of stalking her. Trump is also backing former White House aide Max Miller in an Ohio House primary against a Republican incumbent who voted to impeach him. Trump's own former press secretary, Stephanie Grisham, has accused Miller of being violent when she was dating him. Multiple people told Politico that Miller had "pushed her against a wall and slapped her in the face."

Missouri Senate candidate and former governor Eric Greitens hasn't yet secured the much-coveted Trump endorsement, but Shuman reports he has lined up "Trump contacts like Kimberly Guilfoyle and pollster Tony Fabrizio." Greitens was indicted in 2018 after a woman accused him of tying her up in a basement and forcing her to perform oral sex, but the case — as often happens with sexual abuse cases — fell apart due to what TPM called "prosecutorial errors" and "a difficult-to-prove charge."

It makes a sad kind of sense that Greitens is getting back into electoral politics, despite being accused of a truly harrowing crime that, in more normal times, would have ended his career even without a conviction. It seems misogyny simply doesn't damage Republican candidates in the eyes of their most loyal voters. On the contrary, a lot of Republicans see misogyny as a positive — it's a way to attract attention and support from a conservative base that wants revenge on liberals for a myriad of insults to male dominance, from the #MeToo movement to letting women have roles like "Speaker of the House" and "presidential candidate."

That's why Hawley is trying to gin up enthusiasm for a likely 2024 presidential run with his "sad men are retreating to video games and porn because they can't be the boss no more" shtick. He's also waging war on efforts to de-gender the draft, which serves no real purpose beyond reinforcing retrograde notions of women as an inferior sex who need "protection" instead of equality. Similarly, Arizona Senate candidate Blake Masters is reframing a very real problem — wage and income stagnation — in sexist terms, because it keeps families from having "one breadwinner" while  "one parent stay[s] at home with the kids." There are many reasons people should be paid fairly for their work (not that Republicans will ever do anything to make that happen). The choice here to make it about a 1950s housewife fantasy, rather than about freedom from damaging debt or opportunities for both sexes to spend more time with family, is telling. And let's not forget all the right-wing sneering at men who take paternity leave.

In fact, it's unfair to the "Leave It to Beaver" era to suggest this rhetoric is nostalgia for the 1950s. Women had the right to vote during the Eisenhower years, after all. The 2020 Republican convention, however, literally featured a "pro-life" speaker who has called for an end to women's suffrage.

Perhaps no individual does more to show how much Republicans are banking on misogyny in 2022 than the perpetually thirsty "Hillbilly Elegy" author J.D. Vance, whose strategy for winning the Senate GOP primary in Ohio has been focused on big-money donations and relentless trolling. In April, Vance decided that his main attack on Joe Biden's Build Back Better proposal was to bash the Democrats for offering affordable child care programs, tweeting that "normal Americans" don't want daycare just "so they can enjoy more 'freedom' in the paid labor force."

The scare quotes around the word "freedom" were truly spectacular — apparently women having freedom is a myth to Vance, like unicorns or people who actually got laid in college. There were plenty of robust rebuttals to his claim that the heart of every "normal" woman pulls her to stay at home all day with little kids. But for our purposes, all we need is readily available poll results showing that child care subsidies ranked among the most popular items, in a bill that is broadly popular across the political spectrum. But perhaps that 64% of folks who support something that's widely available in most other Western democracies are not "normal" Americans to J.D. Vance.

As I've noted before, there really is a large audience for this "kinder, küche, kirche" rhetoric, as demonstrated by the gross sexism so often visible on Fox News and the "tradwife" fantasies promoted by groups like the Proud Boys. Trump actually did win in 2016 — albeit through the antiquated mechanism of the Electoral College — despite the "grab 'em by the pussy" moment. So it's unsurprising that misogyny isn't much of an obstacle for Republican candidates, and may even represent value added. (Vance sure hopes so!) But as the Women's March that directly followed Trump's inauguration showed, as did the 2018 midterms, that stuff can also fire up angry resistance among women, especially those who might otherwise tune out of politics in this post-Trump era. Trump's Bam Bam Caucus might drive the dirtbag turnout he craves — he's undeniably good at that. But it might also motivate Democratic women who believe that the number of violent misogynists in the Senate should be reduced as close to zero as possible, rather than increased.