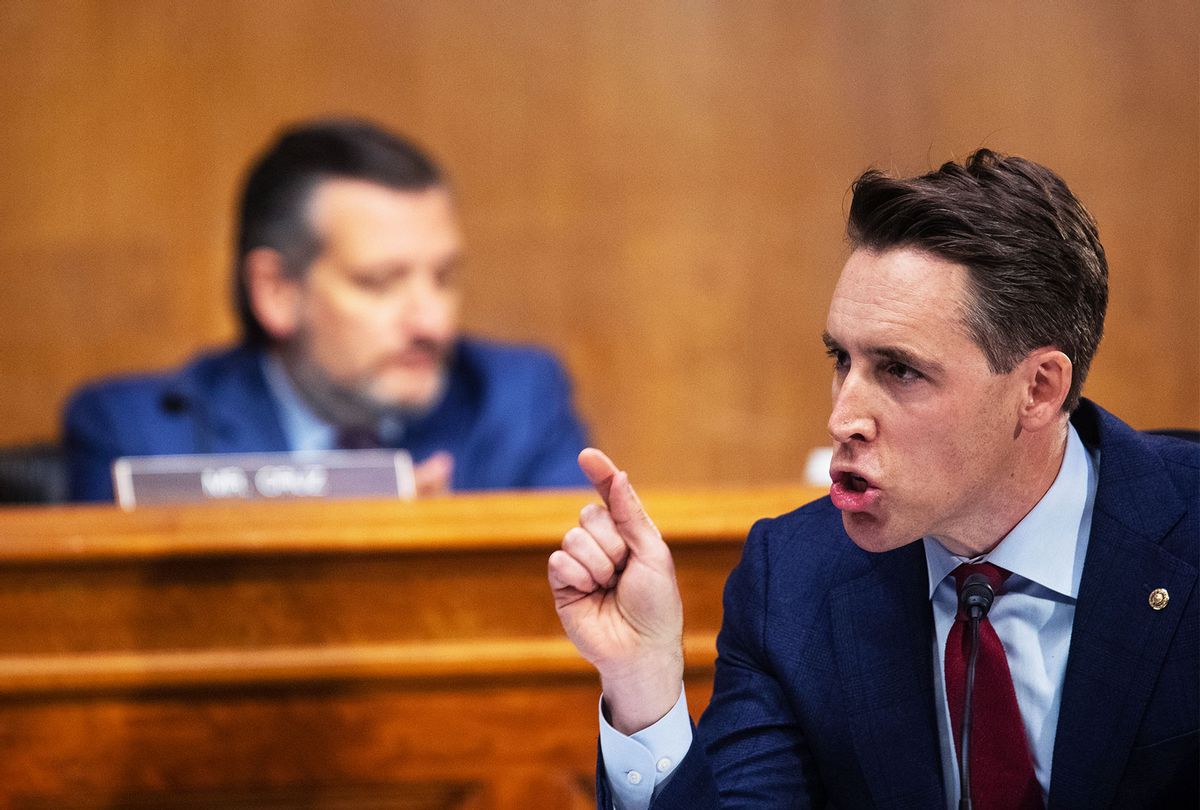 Because right-wingers are nothing if not unoriginal, Josh Hawley, the Republican senator from Missouri, is centering his likely doomed 2024 presidential bid on the played "feminists are man-haters" schtick. It's a bit that was long in the tooth even when Hawley, 41, was running off potential prom dates by sneering at their Lilith Fair tickets. In the era of #MeToo and the Texas abortion bounty hunter law, this "men are the real victims" nonsense is particularly laughable. Still, Hawley is digging in. And, to illustrate why he's going to get trounced in the GOP primary by Donald Trump, he's doing so by attacking two very popular American pastimes: porn and video games.

On "Axios on HBO" Sunday night, Hawley defended a speech he made at a gathering of conservatives last week, in which he insisted that liberals are trying to create "a world beyond men" because liberals hate "traditional masculine virtues" like "courage and independence and assertiveness." In response, the supposedly braver, more independent, and more assertive gender, according to Hawley, is "withdrawing into the enclave of idleness and pornography and video games." True men of courage, it's well-known, react to even the slightest criticism by pouting in their mancaves like toddlers throwing a tantrum.

When pressed on this by Axios' Mike Allen, Hawley doubled down, insisting that liberals are saying "your masculinity is inherently problematic." But tellingly, he was extremely vague on examples of either liberals saying this or even what he means by "masculinity." Instead, he just said, "A man is a father. A man is a husband. A man is someone who takes responsibility."

So the charge is what, that liberals are against men being fathers, husbands, and people who take responsibility? Note that it was just last month that it was liberals defending Transportation Secretary Pete Buttigieg after he took paternity leave to care for his two prematurely born newborn babies. It was conservatives like Tucker Carlson and supposed masculinity icons like Joe Rogan who were bashing Buttigieg for having the courage and independence of mind to shrug off their childish bullying to do what was right for his family. Indeed, looking at that whole incident, what is clear is that whatever conservatives are defending about masculinity is something, but it sure doesn't have anything to do with taking responsibility or being devoted to family.

As is usual with these reactionary defenses of "masculinity," what Hawley is trying to say is left deliberately ambiguous. As Paul Waldman of the Washington Post recently pointed out, for instance, "assertiveness" can mean all sorts of things, as, "Harvey Weinstein was certainly an assertive man, but so is Sen. Bernie Sanders."

It's also worth noting that these "masculine" qualities are hardly exclusive to men. It's doubtful that even Hawley is a troll enough to deny that women should also want to be courageous, independent, and assertive. Indeed, it's hard to think up a supposedly "masculine" virtue that isn't also a quality non-men aspire to have. Strong? Honorable? Competent? All also virtues in women and non-binary folks.

No, Hawley is being vague because what is being defended here is not virtuous behavior at all, but sexism and male dominance. The left doesn't have ire for men who exhibit good or pro-social behaviors. The behavior Hawley whines is called "toxic masculinity" is cis straight men who act entitled and abusive, in ways that range from being merely gross (like mansplaining) to being downright criminal (such as Donald Trump's boast about how he "grabs 'em by the pussy.") You're not really seeing a lot of feminists bash, say, Barack Obama for being a good husband and father. You do, however, see a lot of criticism of, to pull a recent example, Dave Portnoy of Barstool Sports for allegations that, as one woman texted a friend, "I was being raped he video taped me and spit in my mouth and choked me so hard I couldn't breathe."

Hawley's little word games cover up for the truly gross behavior that he and his audience are feeling defensive about. Men who long for when it was easier to get away with sexual harassment and abuse can project that behavior into the term "assertive." But if confronted on this, Hawley will just pretend he's talking about men speaking up for good causes, which, again, no one objects to. "Independence" sounds great, until you realize that a lot of crappy men are hearing a defense of men like Aaron Rodgers and Joe Rogan, who think being "independent" means believing you know better than doctors how immunity works. And by "courage," it's hardly likely Hawley's intended audience is imagining the true courage of a young drag queen performing for the first time or the men at NBC News who turned on Matt Lauer for his alleged sexual assaults. It's men who want to believe they're warrior princes of the highest order because they brave women's eyerolls with their "take my wife, please" jokes.

That it's sexism Hawley is defending is evident in this porn-and-video-games talk. That's just a tired sexist trope, that men's presence in women's lives needs to be purchased with women's submission, and if women demand equality, men will reject them entirely. This threat of male abandonment has been leveraged to keep women down for, well, ever. In recent decades, however, it's lost some teeth. Women are no longer barred from having checking accounts and jobs, and so aren't in danger of being destitute for the sin of being too uppity. The premise that a man's value is so self-evident that a woman should subjugate herself to keep a man happy, which was treated as gospel in the 50s era America the right is so nostalgic for, has also lost a lot of its shine. Straight women are increasingly asking men to demonstrate real worth, by being a partner instead of entitled and domineering. Hawley is speaking to an audience terrified of having to actually step up and be something more than a paycheck with a pulse to women.

The grim truth is a lot of men — and unfortunately, their female enablers — believe female submission is men's birthright and are quite angry about changing gender norms. It's why Donald Trump didn't lose any votes on the right for bragging about sexual assault. It's why there's so much whining about "cancel culture" from so many straight men who are criticized for acting like jerks or bigots. It's why groups like the Proud Boys wallow in "tradwife" fantasies, wishing for the days when women didn't have rights so had to put up their crap.