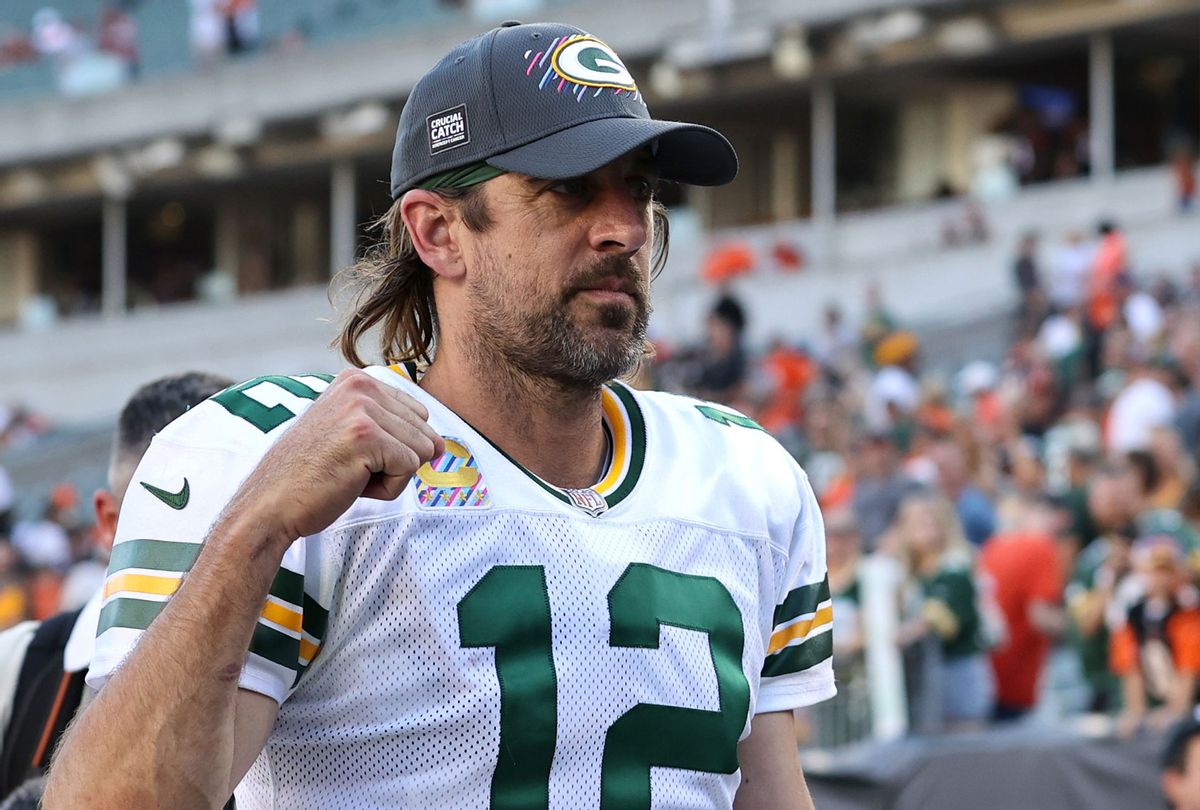 It's been quite a week for Green Bay Packers quarterback Aaron Rodgers, since it was revealed the reigning MVP deceived reporters about his vaccination status, got COVID shortly after dressing as John Wick at a Halloween party, and seems to have broken several rules for unvaccinated NFL players. Rodgers had reportedly petitioned to get the "homeopathic treatment" he'd been taking to supposedly prevent COVID approved by the NFL, even presenting his own "research," but was denied. Still, he answered "yes" to a question about being vaccinated back in August.

Now, as of a Friday appearance on the "Pat McAfee Show," Rodgers is doubling down. The all-star quarterback, who will miss Sunday's game against the Kansas City Chiefs and isn't allowed at the Packers team facility for at least the next 10 days, aggressively defends both his position against the COVID vaccine and his choice to lie to the press about his vaccination status.

According to Rodgers, he's just "a critical thinker" who believes "strongly in bodily autonomy," though we've yet to see him march in the streets against abortion bans. Still, Rodgers refuses to be called an "anti-vaxxer" or a "COVID-denier or any s**t like that," and is just opposed to the massive "witch hunt" that is the NFL's COVID vaccination policies.

Rodgers' conversation with McAfee really only spirals further from there. In a Fox News-esque rant about being pursued by the liberal "woke mob," Rodgers continues to try to defend his behavior, and even seems to blame his catching COVID . . . on the vaccine itself.

"Before my final nail gets put in my cancel culture casket, I'd like to set the record straight on so many of the blatant lies out there," Rodgers said. "I tested for COVID over 300 times before testing for possible positive and I probably got it from a vaccinated player."

Rodgers then seems to address the "woke mob" directly, as he asks a series of questions that public health experts have spent the past months answering: "If the vaccine is so great, how come people are still getting COVID and spreading COVID and unfortunately dying from COVID? If the vax is safe, how come the manufacturers of the vaccine have full immunity?"

To be clear, people who are vaccinated can still get COVID and transmit it, but they're also significantly less likely to die or experience severe symptoms. The effectiveness of COVID vaccines is also impacted by the amount of people in a community who are vaccinated. Considering how much "research" Rodgers has supposedly done, you'd think he would have read about this at some point.

Rodgers then doubles down again (does this count as a fourth down?) on his claims to be protecting himself from COVID, despite not being vaccinated and literally catching COVID. Specifically, Rodgers said he's been taking ivermectin, a medicinal paste that treats threadworms and other parasites, often in horses, and hasn't been approved by the FDA as a treatment for COVID. Where might Rodgers have gotten this idea, you ask?

"I've consulted with a now-good friend of mine, Joe Rogan, after he got COVID, and I've been doing a lot of the stuff that he recommended in his podcasts and on the phone to me," Rodgers says. He then lists some of these "treatments" as "monoclonal antibodies, ivermectin, zinc, vitamin C and D, and HCQ." While Rodgers recounts feeling symptoms from COVID over the past few days, at the time of recording the podcast, Rodgers says he feels "incredible."

As if citing his friendship with Rogan, who's been a leader in spreading COVID misinformation and often devotes his podcast to right-wing conspiracy theories, weren't enough, the cherry on top of Rodgers' dumpster fire of an interview is his comparison between himself and Martin Luther King, Jr.

"The great MLK said, 'You have a moral obligation to object to unjust rules and rules that make no sense,'" Rodgers says, equating his flouting of basic public health policies with the legendary civil rights leader's historic activism.

Ultimately, Rodgers emphasizes that he's feeling "really good," and claims that if he were sick with the flu and not COVID, he "would be playing on Sunday" against the Chiefs, but he's excited to see his backup, Jordan Love, at the helm of the Packers this weekend.

Packers fans are still hoping Rodgers will be able to rejoin the team by the day before Packers' Nov. 14 game against the Seahawks. But this will only be possible if he tests negative and is asymptomatic at the 10-day mark by Nov. 13 next week. And despite Rodgers' positive attitude about his health following his testing positive for COVID, he and Green Bay remain under investigation by the NFL for violations of league rules for unvaccinated players