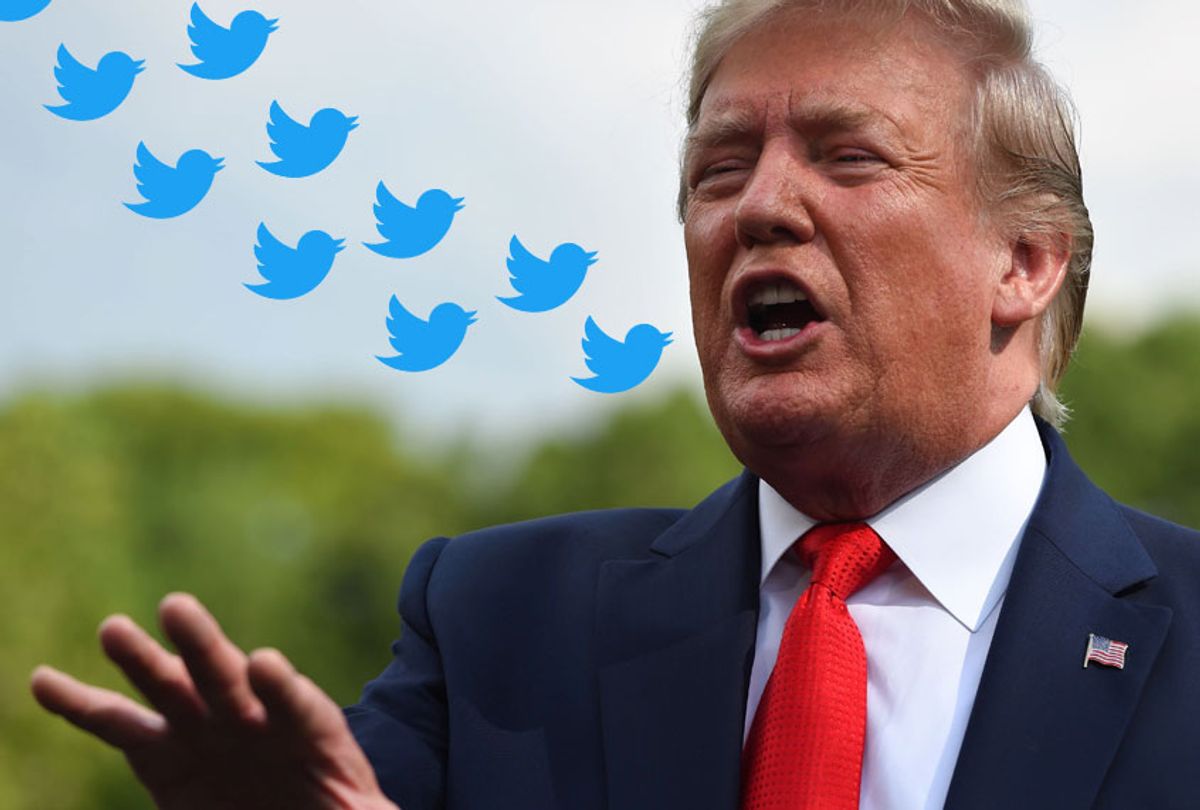 Mark the day in your calendars: On January 8, 2021, Twitter gave President Donald Trump the proverbial heave-ho, banning him permanently.

"After close review of recent Tweets from the @realDonaldTrump account and the context around them — specifically how they are being received and interpreted on and off Twitter — we have permanently suspended the account due to the risk of further incitement of violence," Twitter wrote in a post. Earlier in the week on Wednesday, the social media site had locked the president's account for 12 hours for violating its rules on Civic Integrity and Violent Threats. Twitter noted that they told him then that "additional violations of the Twitter Rules would potentially result in this very course of action." It then quoted the two tweets posted by Trump which it deemed to have violated those rules.

"The 75,000,000 great American Patriots who voted for me, AMERICA FIRST, and MAKE AMERICA GREAT AGAIN, will have a GIANT VOICE long into the future," the first tweet proclaimed. "They will not be disrespected or treated unfairly in any way, shape or form!!!"

The second tweet added, "To all of those who have asked, I will not be going to the Inauguration on January 20th."

Twitter explained that those tweets have to be viewed in the context of the recent coup attempt by far right Trump supporters, who stormed the Capitol on Wednesday. The company "determined that they were highly likely to encourage and inspire people to replicate the criminal acts that took place at the U.S. Capitol on January 6, 2021," ultimately deciding to permanently suspend Trump's account.

Many took to Twitter to react to the fact that the president — who directly incited the violent mob that stormed the US Capitol building — was finally being held accountable by the powerful social media platform for his violent rhetoric.

Canadian author and illustrator Jonny Sun tweeted, "i will always remember where i was when donald trump was suspended from twitter. i was on twitter"

Notably, Trump's presidential Twitter account, @POTUS, is still active, although a reporter from The Verge claims that a Twitter spokesperson told her that the company will remove any postings by Trump through the @POTUS account.

"Donald Trump is such a narcissistic psychopath that I reckon he'll be more devastated at losing his Twitter account than he is about losing the presidency," Irish journalist Andrew Quinn observed.

Others concurred. "Genuinely unsure whether impeachment/conviction or a Twitter ban is in Trump's mind a worse punishment," tweeted Elaina Johnson, editor-in-chief of the conservative website The Washington Free Beacon.

The lateness of the action — only 13 days before his term ends — prompted some wry comments. Another comedian, Sam Morril, tweeted that "banning Trump from Twitter right now is like kicking out a heckler when there's 2 min left in the show."

Some on the right were displeased. Mark Levin, a right-wing radio personality who supports Trump, tweeted that he has "suspended my own Twitter account in protest against Twitter's fascism. I ask all my followers to join me now on Parler and Rumble." Parler is an alternative social media site with a no-moderation policy that many Trump supporters have flocked to. While Trump is not officially on Parler, many in his family and in his campaign are. It is unclear whether joining Parler would significantly help Trump, given the platform's much smaller reach. Incidentally, Apple threatened to ban Parler's app unless the site implements a moderation policy while Google has already suspended it for not having "robust moderation."

Trump used Twitter to fuel his rise to power, crafting tweets that, as Amanda Hess observed for Slate in 2016, "manage to hit upon all three of Aristotle's modes of persuasion: logos (the appeal to logic), ethos (the appeal to credibility), and pathos (the appeal to emotion)." Although many of Trump's tweets were perceived as hateful and incendiary, the company justified keeping him there by arguing that it is in the public interest to see what powerful politicians have to say.

The social media giant began to draw the line in May, however, when they included fact-check labels on two of his tweets after Trump used those posts to falsely claim that mail-in ballots were fraudulent. Trump responded by attacking Twitter's free speech rights, saying that he would "strongly regulate, or close" down social media platforms that he perceived as hostile to himself and his supporters. He later followed through on that threat by signing an executive order that instructed the Federal Communications Commission to draft a regulation to exempt social media platforms from certain liability protections.

Legal experts were skeptical of his ability to do this. "The threat by Donald Trump to shut down social media platforms that he finds objectionable is a dangerous overreaction by a thin-skinned president. Any such move would be blatantly unconstitutional under the First Amendment," Harvard Law professor Laurence Tribe told Salon by email at the time.

But those who supported Trump cheered on his attempts to punish social media platforms. Raheem Kassam, who co-hosts a podcast with fellow Breitbart alumnus and Trump's former senior counselor Steve Bannon, told Salon at the time that "Twitter must and will be brought to heel as a public menace."

There is no evidence whatsoever that President-elect Joe Biden stole the 2020 election from Trump. The president has lost every case he has brought to court alleging fraud — and roughly five dozen cases overall — as more than 90 federal and state judges have rejected his various legal claims, including many Republicans (some appointed by Trump himself). His own attorney general, William Barr, announced after an investigation that there was no evidence of Biden winning the election through fraud, prompting Trump to fire him. The Supreme Court unanimously declared that there was no merit to Trump's claims of a stolen election, including six conservative judges (three of whom were appointed by Trump himself). Further undermining Trump's credibility, he has claimed as far back as 2016 that he will only accept an election's results if he is the winner.