Don't act surprised: Donald Trump was never going to accept the election results if he lost 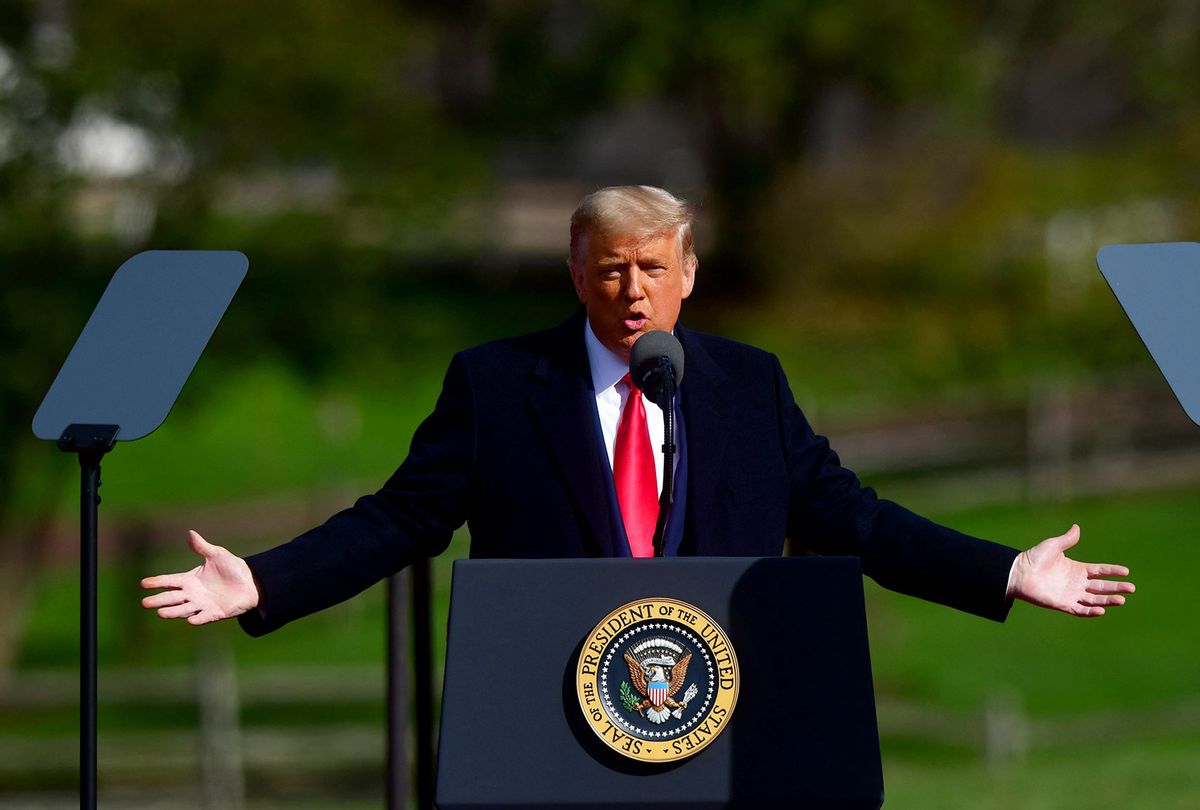 Though the media took his denial of election reality as a shock, President Donald Trump was never going to accept the results of this year's election unless he was declared the winner. He said so himself years ago.

This is the elephant in the room, the undeniable fact that demolishes his credibility when he says he was actually reelected — and, incidentally, the reason why both he and the people backing his unprecedented post-election temper tantrum will be remembered by history as forever losers. Indeed, long before the 2020 election, Trump's go-to response to even the possibility of losing any election has been to accuse the other side of cheating.

During the 2016 Republican presidential primaries, after he lost the Iowa caucuses to Sen. Ted Cruz of Texas, he claimed that he wasn't actually defeated in the Hawkeye State because Cruz "stole it." He also argued that Cruz's supposed "fraud" was so egregious that "either a new election should take place or Cruz results nullified." Although he moved on from his claims about Cruz after he ultimately won the GOP nomination, Trump accused Democratic nominee Hillary Clinton of doing dishonest things "at many polling places" without providing any evidence. He repeatedly insisted that the election was "rigged" against him, a point that Clinton raised during one of their debates when she observed that he even accused the Emmys of being "rigged" against him when he was snubbed for his work on "The Apprentice." During that same debate he refused to answer a question about whether he would accept the 2016 election results if they went against him, merely saying he would keep America "in suspense" and "look at it at the time." At an Ohio rally weeks before the election, Trump said that he would only accept the results of the upcoming election "if I win."

Although Trump defeated Clinton because of his Electoral College victory (306 to 232 — at least before certain electors defected — which coincidentally is the same margin by which he lost to former Vice President Joe Biden in 2020), he lost in the popular vote by 65.9 million votes (48.2%) to 63 million votes (46.1%). Once again, he blamed fraud. He told his supporters that "I won the popular vote if you deduct the millions of people who voted illegally," although he provided no evidence of any large number of people voting illegally, much less the 3 million necessary to account for his popular vote deficit. Trump eventually created a voter fraud commission to look into the claim of illegal voting, but it was disbanded after the members found no evidence of widespread voter fraud.

Trump pulled the exact same stunt in 2020. After getting himself impeached for trying to pressure Ukraine into smearing Biden, Trump found himself running against the former vice president anyway, and polls repeatedly showed Biden with an advantage over the incumbent. Because Biden voters were disproportionately likely to vote by mail as a result of the pandemic, Trump tried to preemptively cast doubt over the reliability of mail-in voting, even though his claims were rejected in court and debunked by experts. This laid the groundwork for him to later claim that there were "vote dumps" against him during the 2020 election because, as he knew, mail-in ballots tend to be counted after in-person ones, meaning that news outlets reporting on the results would initially show Trump having large leads before all of the Biden votes began to erode them. In a similar vein, Trump also tried to kneecap the Post Office, a move that critics claimed was motivated by a desire to hinder mail-in voting. (Trump later admitted that he took money away from the Post Office so the US "can't have universal mail-in voting.")

He also repeated the same "if I lose, it's rigged" rhetoric he employed in 2016. At an August rally in Wisconsin, Trump told his supporters that "the only way we're going to lose this election is if the election is rigged." In one of his debates with Biden, the president made a number of unsubstantiated claims about voter fraud, from claiming 80 million mail-in ballots could not be securely sent in and citing examples of normal human error when it comes to managing mail as evidence of a widespread conspiracy against him to falsely claiming pro-Trump poll watchers were being banned in Pennsylvania and postal workers were selling ballots in West Virginia. Shortly before the election, Trump told Fox News' Chris Wallace that he would not "give a direct answer" about whether he'd accept election results that were unfavorable to him, instead arguing "I'm not going to just say 'yes.' I'm not going to say no and I didn't last time either." He also told Wallace that is not a "good loser" before adding that "mail-in voting is going to rig the election."

On Election Day, Trump prematurely claimed that he had won and on the day after the election tweeted, "They are finding Biden votes all over the place — in Pennsylvania, Wisconsin, and Michigan. So bad for our Country!" He repeated this two days after the election, telling reporters that "I've been talking about mail-in voting for a long time. It's really destroyed our system. It's a corrupt system. And it makes people corrupt even if they aren't by nature, but they become corrupt; it's too easy. They want to find out how many votes they need, and then they seem to be able to find them. They wait and wait and then they find them." Then, exactly as anticipated, he falsely claimed that votes were being "dumped" as mail-in ballots revealed he had actually lost despite the in-person ballots initially giving the impression he was winning. After every vote was counted, it was revealed that 81.3 million Americans voted for Biden (51.3%) and 74.2 million Americans voted for Trump (46.9%).

To be clear, this is not the only reason Trump's claims of having been robbed lack all credibility. At the time of this writing, Trump has lost 59 of the cases he has brought to court supposedly alleging voter fraud (many actually did not do so but were merely presented to the public as if they did), with many of the judges who ruled against him being fellow Republicans, including some he appointed. (The only legal case he won had nothing to do with voter fraud but about how much extra time first-time voters in Pennsylvania could get to confirm their identifications in order for their mail-in votes to be counted.) Overall more than 90 federal and state judges have rejected Trump's legal challenges to the Election Day results. His own attorney general William Barr, who was a notorious toady, admitted that after a thorough investigation he did not uncover any evidence of fraud that could change the 2020 election results. (Trump fired him for this, of course.) The Supreme Court unanimously declared that Trump's fraud accusations had no merit, a decision that included the three judges appointed by the president himself. Republican leaders in the swing states of Arizona, Georgia, Michigan and Pennsylvania have refused to overturn their results because they know it would be illegal for them to do so.

At this point the president and his legal team have resorted to gish galloping, or attempting to win an argument by overwhelming an opponent with an excessive number of spurious claims — that all of these Republican and/or pro-Trump judges and officials are part of a giant conspiracy to steal the election from him, that large numbers of dead people voted, that Dominion voting machines changed results, and so on — in the hope that they will not be able to keep track of and thereby comprehensively debunk all of them. As my colleague Amanda Marcotte has written, there is evidence that many Trump supporters don't even sincerely believe that the election was stolen, but are making intentionally bad faith arguments out of a mixture of partisanship, wounded pride, a desire to delegitimize President-elect Joe Biden and the hope that they can perhaps help the president pull off a coup.

Yet they would not be doing this if Trump himself had not set the example that it is okay to deny an election's results unless you are declared the winner. All of the lawsuits, the outraged tweets and the "Stop The Steal" protests boil down to that single fact. Trump spent years before his presidency arguing that if he did not win an election, it would not count. Now he and his supporters are simply following that authoritarian argument to its inevitable, hateful conclusion.