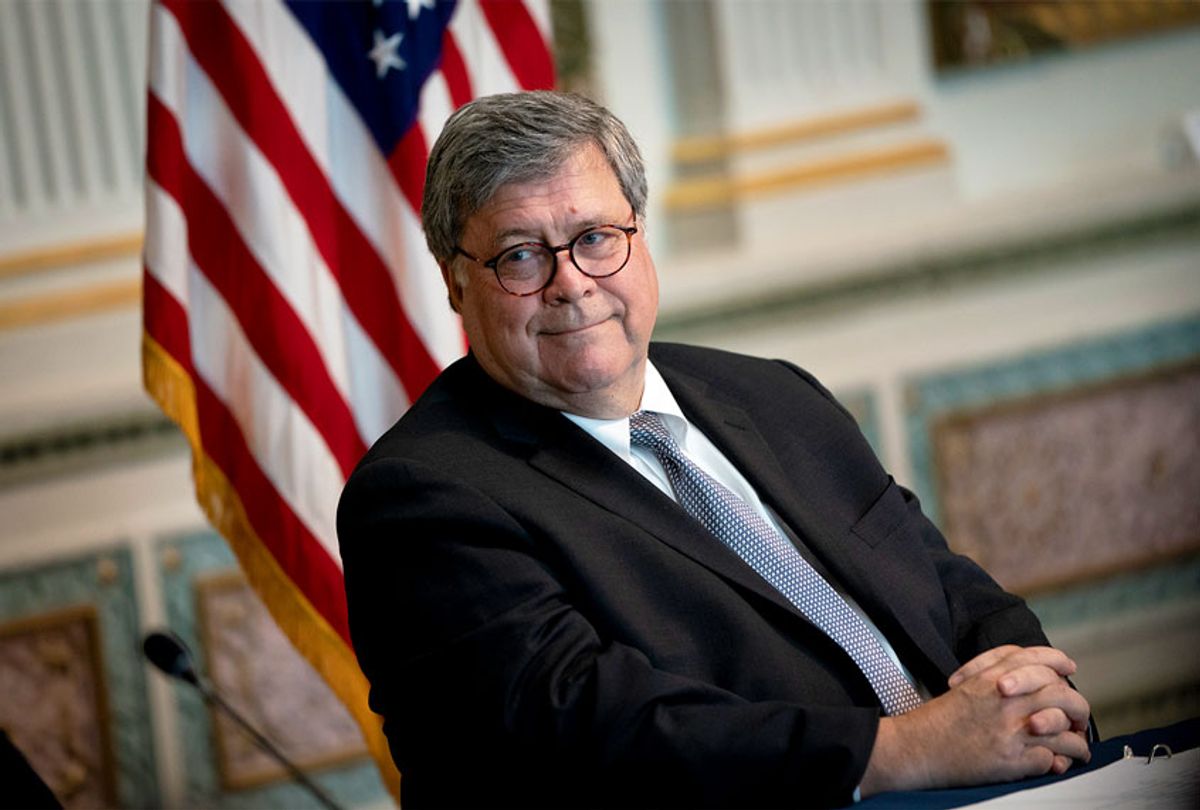 After all that he did for President Trump, Barr was still forced out of his job as Attorney General for failing to hurl himself over a cliff as a human sacrifice. Trump wanted him to use the Department of Justice to help overturn his election loss which even Barr wasn't able to finesse. Adding insult to injury, Trump just couldn't forgive him for failing to "pull a Comey" by using a DOJ investigation of Hunter Biden to sabotage Joe Biden's campaign.

Not that Trump's unceremonious dumping stopped Barr from debasing himself even more ostentatiously than usual by offering a "resignation letter" that he obviously cribbed from one of those flowery love notes North Korean Dictator Kim Jong Un used to write to Trump during their passionate bromance. I'm guessing that was the price of getting out without being fired via an insulting tweet which seems to be something Republican men fear even more than thermonuclear war or feminism. It just goes to show that no matter how much people are willing to prostitute themselves for Donald Trump, they are only as good as their last bad deed. As Amanda Marcotte pointed out, Trump even stabbed his old mentor Roy Cohn in the back when he no longer had use for him:

Barr, who publicly lobbied for the job, proceeded to spend the next two years as a loyal flunkie for Trump, leveraging the power of the attorney general's office to shield Trump from any accountability for his various criminal and ethical violations. Barr covered up for the Russian collusion. He tried to fix the Ukraine scandal. In the last days of the campaign, he even bolstered Trump's lies about "voter fraud", obviously an effort to support a conspiracy to steal the election.

To that list I would add his blatant political interference in the Michael Flynn and Roger Stone cases as well as his personal interest in the Durham probe all of which created massive turmoil in his department causing several career prosecutors to leave in disgust.

Barr never even tried to hide the fact that he considered it his duty to protect the president and his cronies from prosecution. He holds a political philosophy about the imperial presidency honed by decades of fulminating about the allegedly poor treatment of Richard Nixon and Ronald Reagan by congressional upstarts and special prosecutors. Barr's infamous, unsolicited memo asserting that Robert Mueller could not charge the president with a crime, echoing those famous words of Richard Nixon — "if the president does it it's not illegal" — was what got him the job in the first place. The inane pretense that he is adamantly opposed to "politicizing" the department of justice, even as he politicized it more than any Attorney General in history, was a true triumph of gaslighting.

He is also a right-wing culture warrior who believes in authoritarian policies to ensure that the nation subscribes to his definition of "order" (he rushed to reinstate the federal death penalty and immediately began executing prisoners in a hurry) and has argued forcefully for a dismantling of secular society  And yes, he is a hard-core partisan zealot whose so-called principles are applied solely for the benefit of the Republican Party. Frankly, I also think in his private moments he is probably a lot closer to the 1970s Archie Bunker style of old-fashioned bigot that he is willing to let on. He's barely able to hide his revulsion for anyone who doesn't conform to his idea of respectability and it's more than obvious that he is hostile towards Black people. We saw that play out in his reaction to the George Floyd protests and the grotesque militarized responses in Lafayette Square and Portland, Oregon. It's not hard to see why he was so keen to join up with Donald Trump.

However, Barr seems to have realized that Trump's loss means that he's done all he can to create the precedents for future Republican imperial presidents to consolidate their power. He successfully protected his president by exerting his own power while ensuring that the norms he broke are still available for Republicans to use against Democratic administrations. His work is done.

As I mentioned on Monday, there has been some chatter that after Barr took the unusual step of making John Durham into a Special Counsel, which somewhat insulates him from a Biden Department of Justice, Trump wanted Barr to appoint other Special Counsels to investigate the baseless election fraud claims and, of course, Hunter Biden. Presumably, Barr declined to lay these landmines on Trump's behalf because the AP reported on Tuesday that Trump is still obsessing on this idea and has been discussing it with numerous other people including White House counsel Pat Cipollone, Chief of Staff Mark Meadows and personal lawyer Rudy Giuliani. His aides are all pushing him hard to do it because they believe "that a special counsel probe could wound a Biden administration before it even begins." And Trump is still debating whether he should pressure Barr's replacement, Jeffrey Rosen and if he can't persuade him, whether to replace him with someone who will do it. This could end up making the Saturday Night Massacre look like a schoolyard squabble. Trump has even suggested that he might be able to appoint the Special Counsels himself. (Bill Barr's many lessons on the unlimited power of the Imperial President  — "I have an Article II!!"— seem to have penetrated.)

It's good to see that Trump has his priorities straight, as usual. Sure, we may still be in the throes of a deadly pandemic and facing logistical complications in getting the vaccines to everyone who needs them. And yes, Congress is flailing about under Mitch "Grim Reaper" McConnell's malevolent desire to make people suffer instead of offering necessary relief. Oh, and the federal government seems to have been the victim of a massive cyberattack by Russia which Trump has not bothered to discuss even once. But that's because he's still busy blustering about voter fraud and plotting to sabotage Joe Biden.

Bill Barr, his obsequious "resignation" letter notwithstanding, is obviously making a break for it before the whole thing explodes. Perhaps he thinks that by getting out now, before Trump could fire him and replace him with someone who would do even more dirty work to subvert the incoming administration, he will have saved his reputation. But it's way too late for that. Barr will forever be remembered as Donald Trump's Roy Cohn and nothing more.