Barr betrayed: Donald Trump has a long legacy of unceremoniously dumping the men who would move planets for him 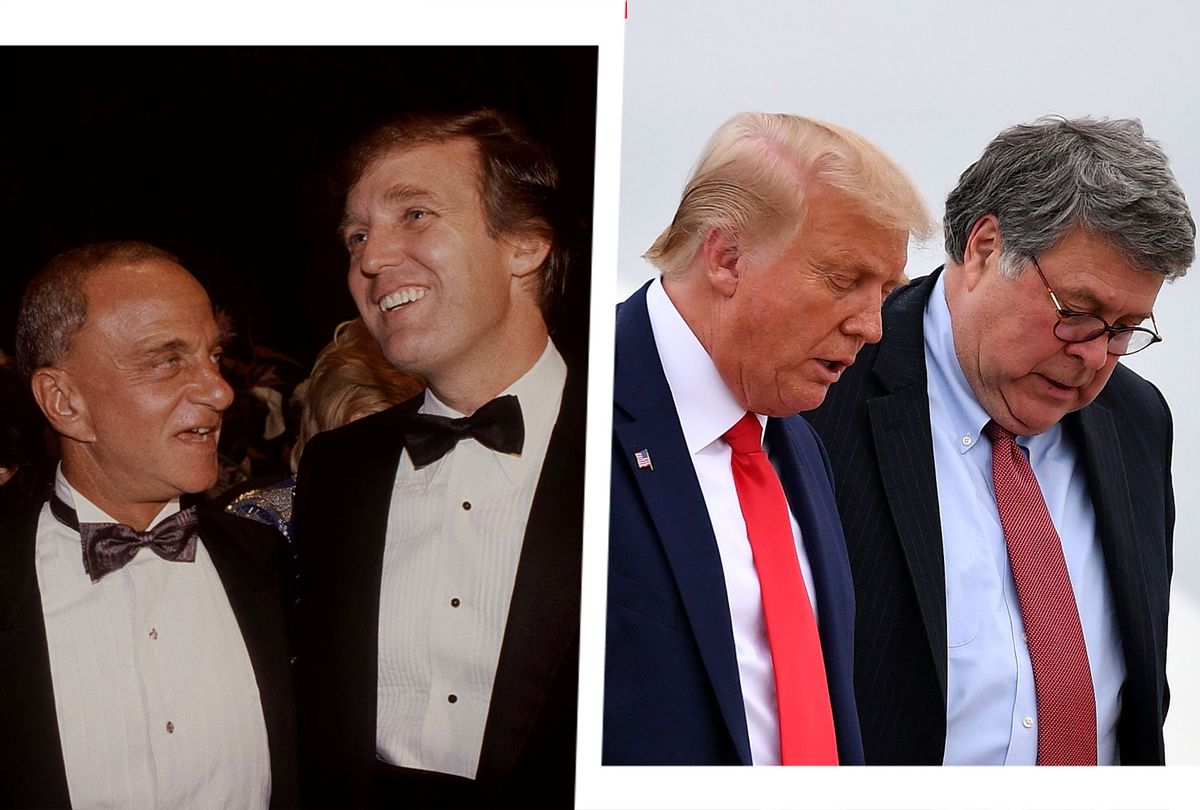 Roy Cohn and Donald Trump attend the Trump Tower opening in October 1983 at The Trump Tower in New York City. | US President Donald Trump and US Attorney General William Barr step off Air Force One upon arrival at Andrews Air Force Base in Maryland on September 1, 2020. (Photo illustration by Salon/Getty Images)
--

Attorney General Bill Barr, after much hinting from the palace intrigue press, has finally gotten the boot, er, resigned, a mere 36 days before the will of the voters forced him out the door. The announcement, released on Donald Trump's Twitter feed as usual, was a long time coming, as Trump has reportedly been furious at Barr for not doing more to falsify evidence of "voter fraud" that Trump can use to justify his ongoing and failing efforts to steal the election. Trump's pressure campaign on Barr to break the law got so out of control recently that Barr reportedly had to ban a White House liason from visiting the Department of Justice (DOJ) offices. But while Barr no doubts his good reputation on Capitol Hill can be restored by parachuting out of the burning plane at the 11th hour, no one should mistake this ending as a redemption tale for Barr.

As Noah Bookbinder of the Citizens for Responsibility and Ethics in Washington (CREW) said in an emailed statement, while it is "beyond ironic that Barr seems to have been pushed out for not going quite far enough to abuse his position for Trump's benefit," the reality is "Barr has repeatedly used the DOJ for the benefit of President Trump." The attorney general clearly viewed himself more as the president's fixer than as the nation's top lawyer protecting the interests of the citizens of the United States.

When Barr first came on to head the DOJ under Trump in early 2019, he replaced Jeff Sessions, who drew Trump's ire by not doing more to obstruct the Russia investigation. Barr, who publicly lobbied for the job, proceeded to spend the next two years as a loyal flunkie for Trump, leveraging the power of the attorney general's office to shield Trump from any accountability for his various criminal and ethical violations. Barr covered up for the Russian collusion. He tried to fix the Ukraine scandal. In the last days of the campaign, he even bolstered Trump's lies about "voter fraud", obviously an effort to support a conspiracy to steal the election.

So what happened? Why did Barr announce — after the election — that a DOJ investigation found no "fraud on a scale that could have affected a different outcome in the election"?

Probably for the same reason the Supreme Court has delicately decided to blow off Trump's demands that they steal this for him: It simply wasn't close enough to steal. It seems that, unlike Trump, Barr has the sense to know when the heist simply can't be pulled off. And so, while Barr crossed every ethical line and probably quite a few legal boundaries for Trump, in the end, it wasn't enough. Trump's belief that loyalty is a one-way street finally kicked in and now Barr is out the door.

Barr is just the latest of lawyers-cum-fixers for Trump that have met the same fate, dating all the way back to the 1980s, when Trump pulled the same move on the infamous Roy Cohn, the man who appears to have taught Trump everything he knows about being a real-life supervillain.

Cohn, for those who don't spend their time wallowing in the stories of evil people, first rose to fame working for alcoholic blacklist enthusiast Sen. Joseph McCarthy, before making a name for himself as the shadiest lawyer in New York City. He was effective, not for his legal genius so much as his legendary skills at bribery, blackmail, and influence-peddling. Only Fred Trump holds as much claim as Cohn does to making Trump the monster he is. Roy Cohn is the man who taught Trump that the rules don't apply to people like them.

This past week, as Axios reports, Trump was in a desperate spiral to overturn the election, calling various legislators and other power players to browbeat them into finding some string to pull to invalidate the election, while also publically threatening and pressuring government officials and the Supreme Court into doing the same. This strategy is pure Roy Cohn, who taught Trump that any hurdle can be overcome by making the right phone calls, greasing the right palms and making the right threats. Just as Trump is doing now, Cohn learned the limits of his power the hard way, when he died of AIDS in 1986. And even though Cohn had devoted himself fully to Trump, turning the incompetent wannabe real estate titan into a success, Trump had no gratitude or loyalty. Instead, he abandoned Cohn, causing Cohn to say in his final days that Trump "pisses ice water."

"Where's my Roy Cohn?" Trump reportedly demanded of his staff in 2017, furious that no one was willing to step up to break the law to help him obstruct the federal investigation into his ties with a Russian conspiracy to interfere with the election.

The answer, of course, is "dead and abandoned by you in his hour of need".

But, of course, the demand was just further proof that Trump simply feels entitled to have minions run around breaking the rules for him, even though they will certainly be discarded the second he has no use for them. At the time, his "Roy Cohns" were Sessions, his first attorney general, and Don McGahn, working as White House counsel. Both did their level best to be loyal soldiers to Trump, and both were chewed up and spit out because they found there were legal lines they wouldn't cross.

Same story for Michael Cohen, who worked for Trump for years in the era after Cohn passed. Cohen spent years doing dirty work for Trump, and eventually went to prison for his role in a campaign finace fraud scheme involving pay-offs to former Trump mistresses. As he did with Cohn, Trump washed his hands of Cohen, telling transparent lies claiming he was not involved in the conspiracy, despite Cohen providing taped evidence showing otherwise.

Unlike all these other men, however, there's good reason to believe Barr will remain unscathed, both personally and politically, from being thrown out with the trash. Barr's eagerness to join the Trump administration never really seemed to be about Trump, but about Trump's usefulness to Barr's ideological ends. Barr has had a long time interest in making the executive branch as close as possible to a monarchical role. Who better than Trump, who commits crimes with the ease the rest of us eat breakfast, to test out Barr's notion that the president could be put above the law?

In the end, Barr may have been a better Roy Cohn than Cohn himself.

Like Cohn, Barr was able to weaponize Trump in his game of cheating the system and getting away with it. But unlike Cohn, Barr never did it out of loyalty, or with any apparent expectation of reward. Using power to get away with criminal behavior appears, with Barr, to be reward enough.