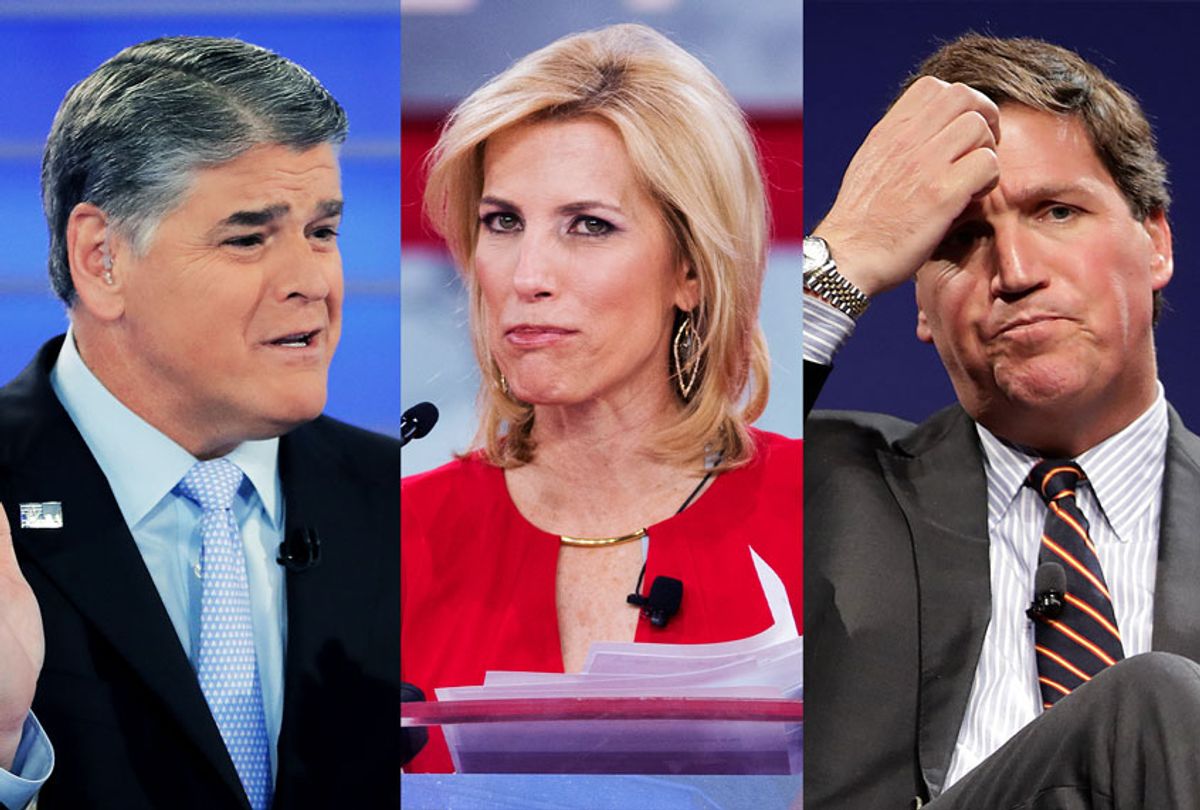 Fox News opinion hosts baselessly raised doubts about the validity of the election results even as the network's own decision desk showed Democratic nominee Joe Biden on the cusp of defeating President Donald Trump.

Fox News was the first network to call Arizona and several other states in favor of Biden. It currently shows Biden sitting at 264 electoral votes, with Nevada, Pennsylvania, Georgia and North Carolina still too close to call.

But even as the network's "news side" refuted the Trump campaign's complaints about the vote, its opinion hosts sought to echo the president's attempts to sow doubt in the integrity of the results.

"Tonight every American should be angry, outraged and worried and concerned about what happened in the election and the lead-up to the election," host Sean Hannity complained, stopping short of echoing Trump's baseless allegations of fraud.

Host Tucker Carlson claimed that the "outcome of our presidential election was seized from the hands of voters" and put in the hands of "clearly corrupted city bureaucrats."

"Many Americans will never again accept the results of a presidential election," he added.

Host Laura Ingraham wondered if "the fix" is "already in," citing "many questions" about unspecified "unverifiable dumps of votes."

Former Trump deputy campaign manager David Bossie asserted without evidence on Wednesday that "they" may be "stuffing the ballot boxes" in Biden's favor.

Former Trump campaign manager Corey Lewandowski said on the show that Trump had "already won" Pennsylvania, Michigan and Georgia. Michigan was later called for Biden, and Pennsylvania and Georgia appear to be slipping away from Trump.

Former Speaker of the House Newt Gingrich falsely claimed that there was "vote theft" in Pennsylvania as he echoed Trump's claim that the vote counting which tipped some elections in Biden's favor looked like a "setup to steal the presidency by the Democrats."

No state allows voters to submit ballots after Election Day, but some count mail-in ballots postmarked by Election Day if they arrive days later. Only a handful of states require a witness signature, though Pennsylvania is not one of them.

The network's news side has tried to inject some semblance of fact into its coverage.

"This is an extremely flammable situation and the president just threw a match into it. He hasn't won these states. Nobody is saying he's won these states,"anchor Chris Wallace said after Trump prematurely declared victory on Wednesday morning. "There's no question that all these states can continue to count votes for days. They don't have to certify for weeks who has won the state."

Arnon Mishkin, the head of the network's decision desk, pushed back on the Trump campaign's complaints about the network's call in Arizona.

"I'm sorry, the president is not going to be able to take over and win enough votes to eliminate that seven-point lead that the former vice president has," he said.

The head of a delegation at the Organization for Security and Co-operation in Europe who is observing elections in the U.S. refuted Trump and his allies' baseless stoking of conspiracy theories around the vote.

"Baseless allegations of systematic deficiencies, notably by the incumbent president, including on election night, harm public trust in democratic institutions," Michael Georg Link, the head of the U.S. observer mission, said in a statement on Wednesday. "Nobody — no politician, no elected official — should limit the people's right to vote."