Conspiracy theories burble up from the right-wing swamp, Fox News launders them and the fringe gets emboldened 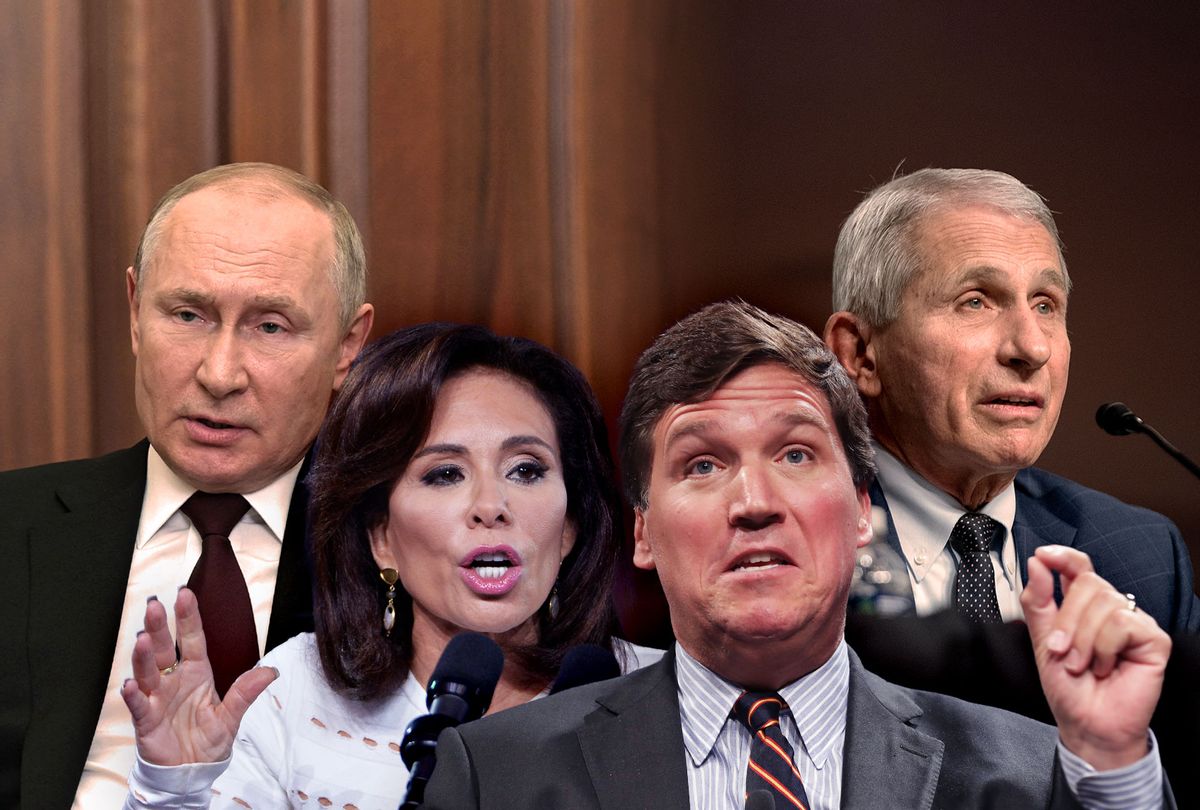 One of the currently preferred rationalizations pro-Russia propagandists are using to justify the invasion of Ukraine appears to have emerged from an American social media network known for hosting QAnon, neo-Nazis and other assorted deplorables. As Justin Ling at Foreign Policy explained it earlier this month, the new theory is that "Moscow is launching airstrikes on Ukraine to destroy bioweapon-manufacturing labs in order to prevent the American infectious disease expert Anthony Fauci from creating a sequel to the COVID-19 virus."

The notion that Ukraine has "bioweapons" and that Russia is invading to stop some dastardly Ukrainian plot didn't even emerge until after the invasion had begun. Prior to that, the laughably thin rationale was based on Vladimir Putin's asinine claims that Ukraine, whose president is of Jewish ancestry, is being run by Nazis. When that didn't really fly, a new justification emerged, from what look to be American sources.

RELATED: QAnon followers are casting Putin in a positive light

As Ben Collins and Kevin Collier of NBC News have traced — and as the Fauci-centric nature of the theory would indicate — this nonsense seems to have started in right-wing circles and only spread after the Russian invasion started. Memes illustrating the conspiracy theory originated on Gab, a Trump-worshipping social media network rife with neo-Nazis and QAnon fans. Soon they were copied to Twitter and spread by QAnon accounts, many which were eventually deleted for spreading disinformation. But by then, of course it was too late: The conspiracy theory had reached Fox News.

On March 9, Fox News hosts Tucker Carlson and Sean Hannity offered cleaned-up versions of the conspiracy theory. Instead of explicitly justifying the invasion of Ukraine, they presented the bioweapons claim as a "theory," simply being offered as a counterbalance to the supposed pro-Ukraine bias of the mainstream media. The next day, another Fox News host, Jeanine Pirro, hauled the Fauci part of the conspiracy theory out of the weeds, first burbling on about "biolabs" and then adding, "Isn't it interesting that we haven't heard or seen Fauci in weeks?"

Welcome to the QAnon-Fox News feedback loop. Conspiracy theories first surface in the right-wing swamplands and spread through social media channels. They get picked up and then, crucially, laundered on right-wing media outlets like Fox News. Dwellers of the right-wing swamps are emboldened by seeing their ideas on Fox News and other "mainstream" conservative outlets and "ordinary" Fox News viewers (presuming they exist) are driven to social media to "learn" more, where they get hit with the harder stuff from QAnon. Rinse and repeat, and pretty soon every GOP voter in the country is full to the brim with ideas first floated by the absolute worst people on the internet.

With this bioweapons hoax, we can see how it works. The original conspiracy theory was, of course, absolutely nuts and Fox News hosts know better than to assert it as straightforwardly as their QAnon sources do. Instead, they reframe it in "just asking questions" mode and leave it up to their audience to make the connections. The Fox hosts never come out and say that the Ukraine invasion was justified by this nonsense hypothetical. They just "ask questions" about whether Ukraine is really the innocent victim the hated mainstream media portrays it as, and they trust — with good reason — that their viewers know how to use Google and social media and will find the hardcore conspiracy theories for themselves.

RELATED: "The View" calls out Tucker Carlson and media pawns "telling lies about the Russian people"

We have seen how this works in all manner of right-wing nuttery. QAnon and QAnon-adjacent circles started floating the idea that the Jan. 6 insurrection was a "false flag" created by the FBI. Soon, Carlson was making documentaries about it and Sen. Ted Cruz tried it out during a Senate hearing. The idea that horse paste was a COVID-19 cure-all started on right-wing social media and, sure enough, was soon being ventilated in "just asking questions" style on Fox News and, sigh, among Senate Republicans. Now we're seeing the same thing with Florida's "don't say gay" bill, where QAnon lies about Democrats being pedophiles, stripped of the blood-drinking, are presented as fact on Fox News.

The QAnon-Fox News feedback loop is grim on its own, especially since so many congressional Republicans have inserted themselves into it. But it's now even more deadly, because Putin and his propagandists are riding along. As disinformation expert Jared Holt explains at the Daily Beast, "while Russia first used narratives and disinformation related to biolabs" to demonize Ukraine in the past, it was only after the QAnon conspiracy theory about Fauci and Ukraine began to spread that Russia adopted it as a justification for the invasion. Ling notes that this QAnon theory is now promoted "by one Russian embassy, an official Russian state propaganda outlet, and media channels in Serbia and China." It is, after all, a better lie than the "de-Nazification" crap Putin spewed at first.

QAnon and its adjacent conspiracy theory communities online have created a way to crowdsource right-wing propaganda. Fox News figured out long ago how useful that is, because the online ecosystem helps sort out which conspiracy theories will do well with their target audience. QAnoners do all the work honing and refining the ideas, and all Fox News has to do is repackage it — just asking questions! — and they're good to go.

Now Putin is exploiting the same online ecosystem. There was a lot of talk, and rightfully so, about Russian-sourced disinformation during the 2016 election.  But increasingly, that looks like a two-way street, with American right-wingers generating and refining conspiracy theories that Russian propagandists can use. Similarly, as Eric Kleefeld notes at Media Matters, Putin's latest televised tirade "could have been copied from right-wing media in the United States," so much so that he even complained about the liberal elites trying to "cancel" him.

Russian propagandists turning to QAnon to sharpen their lies makes a lot of sense, in a sad and dark way. America's freewheeling social media networks provide the ability to crowdsource and refine conspiracy theories in a way that isn't available in the top-down and heavily censored media ecosystem of Russia. Fox News figured out how to mine the best output of the online lie-generation machine long ago. It was just a matter of time until Putin did.

For the moment, most Republican voters say they oppose both Putin and the invasion of Ukraine. But those same folks also used to be pro-vaccine. That changed after months of being caught in the QAnon-Fox News feedback loop. But even if Carlson and company can't convince their audiences to love Putin and hate Ukraine, this situation has already done immense damage. Every day, Russian troops are murdering and kidnapping Ukrainians in this unprovoked war — and using American-made propaganda to justify it.

Read more on the Ukraine war and the surrounding propaganda: