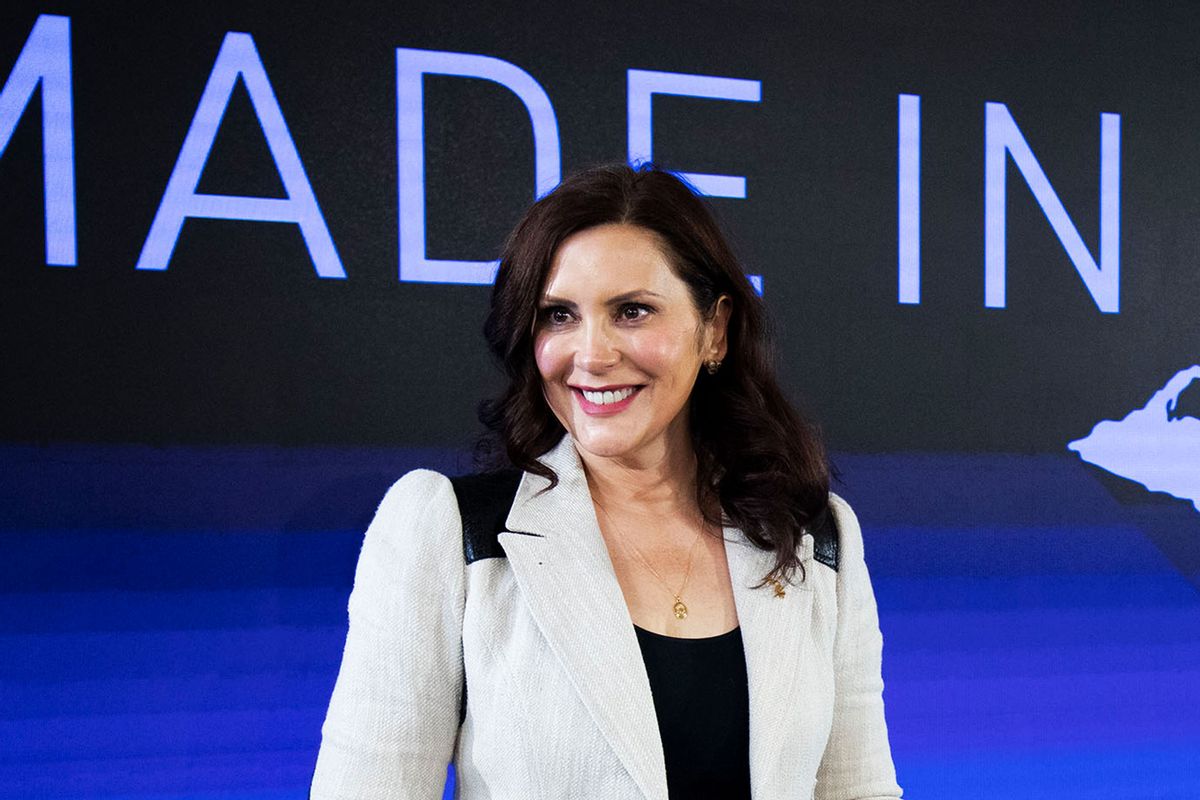 Michigan Governor Gretchen Whitmer poses for a photo after an event at which General Motors announced they are making a $7 billion investment, the largest in the company's history, in electric vehicle and battery production in the state of Michigan on January 25, 2022 in Lansing, Michigan. (Bill Pugliano/Getty Images)
--

A federal jury on Friday found two men suspected of conspiring to kidnap Michigan Gov. Gretchen Whitmer not guilty, with the jury deadlocked on charges against the other two defendants.

The decision culminates a weeks-long trial that began on March 9 over whether Adam Fox, Brandon Caserta, Barry Croft Jr. and Daniel Harris conspired to kidnap the governor, and in the process, use a weapon of mass destruction. The jury found both Harris and Caserta not guilty on all charges but could not deliver a verdict for Croft and Harris.

According to prosecutors, the alleged plot developed over the course of several months, starting back in early 2020, in response to what the defendants felt were overly restrictive COVID-19 policies, according to the Associated Press.

All four men allegedly sought to construct and deploy explosives to dismantle a bridge near Whitmer's residence in Elk Rapids, Michigan, which according to their alleged plan, would have prevented police from intervening by car.

"In America, there's a lot of things you can do. You can criticize the government publicly, absolutely," Assistant U.S. Attorney Nils Kessler said during the trial, according to the Detroit Free Press. "If you don't like the government's policies, you can protest them. If you don't like elected leaders, you can vote them out at the ballot box. What you can't do is kidnap them, kill them, or blow them up."

The defense, meanwhile, argued that all four men fell victim to an illegal practice known as entrapment, in which undercover law enforcement officers coerce people into committing crimes they would have not otherwise committed.

"Somebody rattles the keys, somebody beats the drum and gets 'em all worked up," said Christopher Gibbons, an attorney representing Fox. "That's unacceptable in America. That's not how it works. You don't make terrorists so we can arrest them."

Key to the defense's argument was the FBI's informant, Dan Chappel, who they alleged was the real ringleader of the plot, egging all the men on at every step of the way. According to the defense, Chappel drove the men to training exercises, meetings, and participated in a reconnaissance mission at the governor's cottage.

"Dan Chappel makes everything happen," Gibbons said at one point.

A total of fourteen men have been implicated in the plot. Two men, Ty Garbin and Kaleb Franks, previously pleaded guilty on several charges related to the apparent plot.

Many of the men involved have or had affiliations with paramilitary militias or right-wing extremist groups. Croft, for instance, was an apparent member of the Three Percenters.