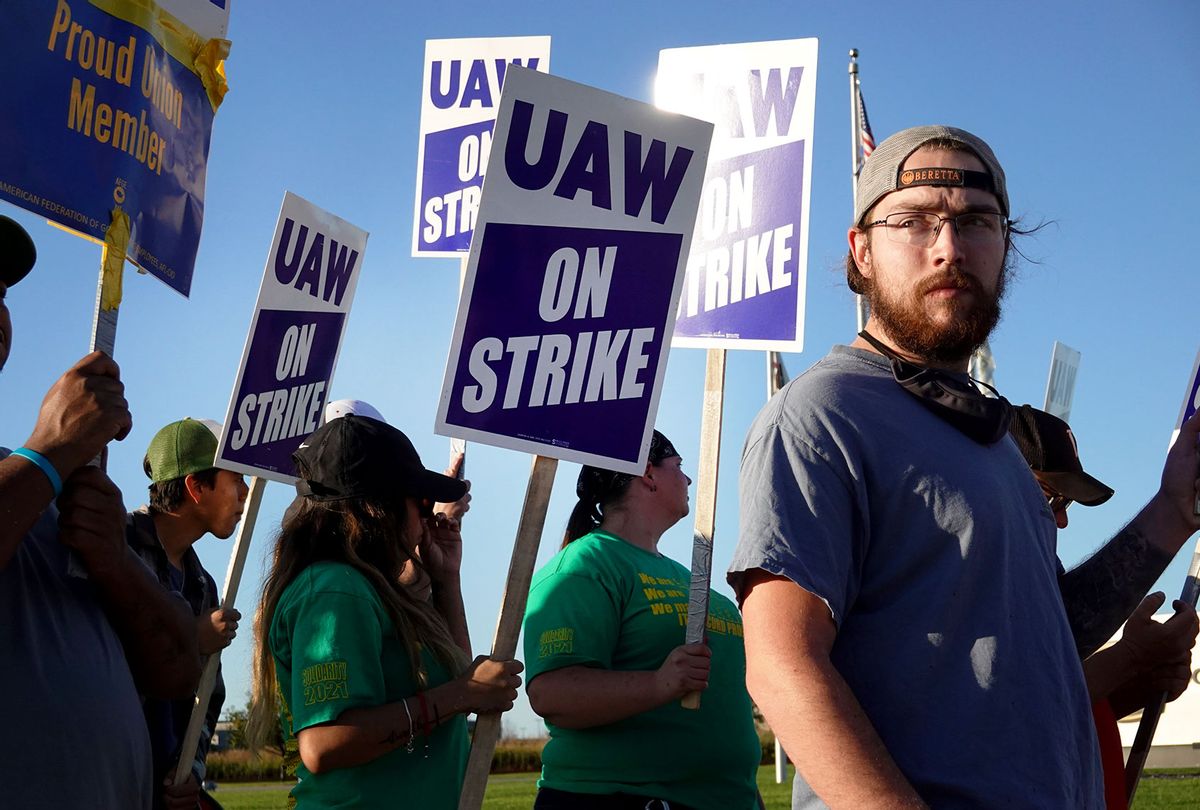 Workers picket outside of John Deere Harvester Works facility on October 14, 2021 in East Moline, Illinois. More than 10,000 Deere employees represented by the UAW walked off the job at midnight after failing to agree to term of a new contract. About 1,400 workers walked off the job at the Harvester Works plant where the company builds combines. (Scott Olson/Getty Images)
--

The early 2020s have brought some disturbing headlines, including 6.1. million deaths worldwide from the COVID-19 pandemic (according to Johns Hopkins University in Baltimore), Ukraine suffering Europe's worst military crisis since World War 2, and an increasingly radicalized Republican Party that has more in common with Hungary's Viktor Orbán and Russia's Vladimir Putin than it does with traditional Reagan/Goldwater conservatism. But there is some good news as well: unemployment in the United States, according to the Bureau of Labor Statistics (BLS), fell to 3.6% in March — which is the lowest U.S. unemployment in more than half a century.

Liberal economist Robert Reich, in an op-ed/listicle published by The Guardian on April 10, notes that "the American economy is rebounding nicely from recession." However, Reich warns that the U.S. is also seeing a "growing imbalance of economic power" that is "is bad for most Americans and for the economy as a whole." And Reich, who served as secretary of labor under President Bill Clinton during the 1990s, argues that President Joe Biden will pay a price politically if he doesn't address this "imbalance."

"As America slouches toward the midterm elections," Reich explains, "you need an economic message that celebrates your accomplishments to date — job creation and higher wages — yet also takes aim at the major abuses of economic power that remain in the system, fueling inflation and widening inequality."

Reich goes on to list ten "indisputable facts" that need to be "center stage" for Biden and other Democrats. The first is that "corporate profits are at a 70-year high, yet corporations are raising their prices." And the others range from corporations "passing…. costs on to consumers in the form of higher prices" to corporations having "little or no competition" to "two-thirds of all American industries" becoming "more concentrated."

The economist observes, "This concentration gives corporations the power to raise prices because it makes it easy for them to informally coordinate price increases with the handful of other companies in their same industry — without risking the possibility of losing customers, who have no other choice."

Other economic trends on Reich's list range from corporations "using" their "near-record profits to boost share prices by buying back a record amount of their own shares of stock" to U.S. workers "barely" having "a wage increase in 40 years, adjusted for inflation" to "wealthy Americas…. now paying a lower tax rate than the working class."

Also on Reich's list: "Income and wealth are being redistributed upward from average working people, many of whom live from paycheck to paycheck, to CEOs and shareholders, including the wealthiest people in America."

Even with low unemployment, Reich laments, U.S. workers are getting a raw deal.

"You have a critical opportunity to reframe the national conversation as it should be framed — around these worsening abuses of economic power by large corporations and the super-rich," Reich writes. "Republicans have left themselves vulnerable because they have no response to this. They believe their 'culture wars' will distract the public from what's going on. This is not and should not be a partisan issue. Average working Americans, many of whom voted for Trump in 2016 and 2020, are being shafted."