It's summer in Neptune's southern hemisphere, and it's inexplicably getting colder 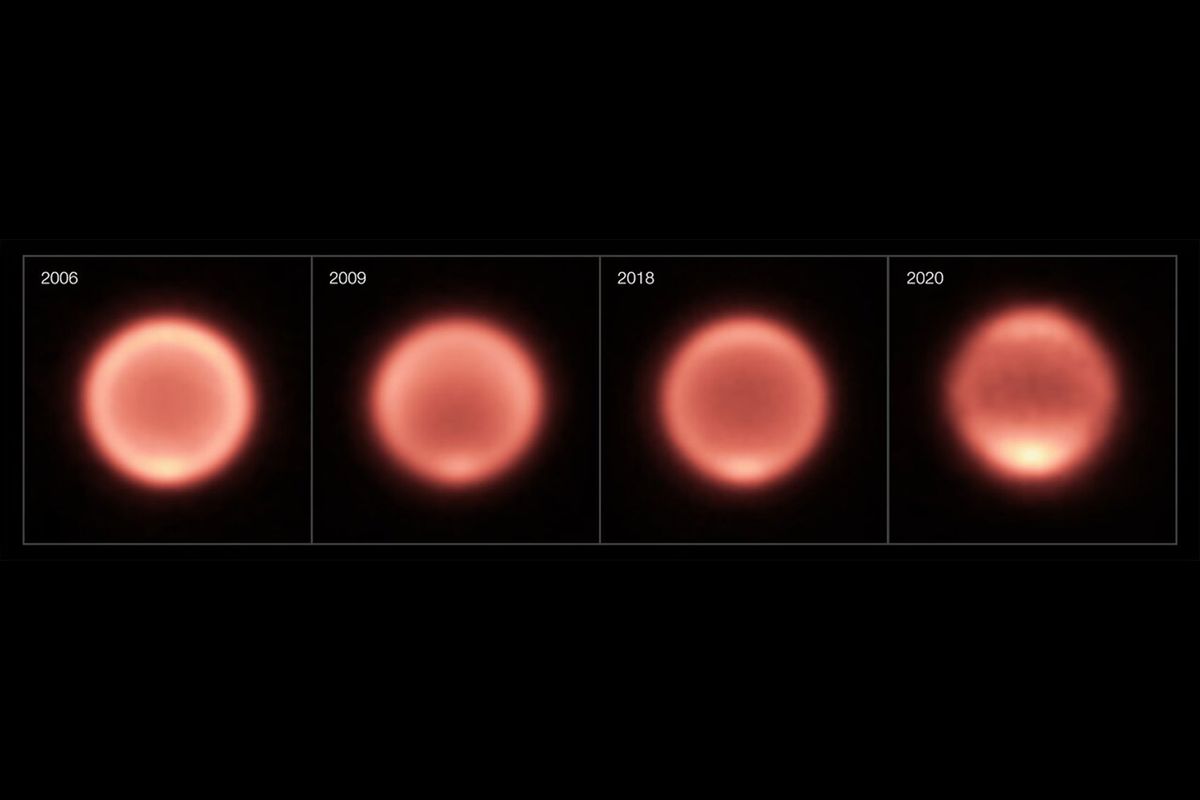 Astronomers are perplexed after a new study found that Neptune is experiencing a surprising shift in temperature. According to a study published in the Planetary Science Journal, atmospheric temperatures in the planet's sunny southern hemisphere have declined when they were expecting them to rise.

"This change was unexpected," lead author Michael Roman, an astronomer at the University of Leicester in the U.K., said in a statement. "Since we have been observing Neptune during its early southern summer, we expected temperatures to be slowly growing warmer, not colder."

Neptune is the most distant planet from the Sun in our solar system. Being nearly 30 times farther away from the Sun than Earth, it takes nearly 165 Earth years for Neptune to orbit the Sun. Because Neptune is slightly tilted on its axis relative to the sun, the gaseous planet has seasons, just like Earth; given the length of a single revolution, each season on Neptune lasts around 40 years.

Despite having four seasons, Neptune has a slightly different climate due to its physical properties: it receives far less light than Earth, and is much colder overall. Like Uranus, Neptune is an ice giant — a title reserved for massive gaseous planets that are also very cold and far from their parent stars. Indeed, Neptune does not have a solid surface like Earth; rather, its atmosphere is made mostly of hydrogen, helium, and methane.

Since 2005, Neptune's southern hemisphere has been experiencing summer. Yet according to the new study, based on infrared images taken between 2003 and 2020 by a variety of space and ground telescopes, atmospheric temperatures in the southern hemisphere have decreased by 8 degrees Celsius (or 14 degrees Fahrenheit) between 2003 and 2018. Scientists were expecting them to increase, since that hemisphere is receiving more daylight as it is experiencing summer.

Astronomers were confronted with another unexpected twist when they observed that, between 2018 and 2020, a dramatic increase in temperatures occurred — 11 degrees Celsius (or 20 degrees Fahrenheit). Such rapid warming and fluctuations have never been observed on the planet before.

"Our data cover less than half of a Neptune season, so no one was expecting to see large and rapid changes," said co-author Glenn Orton, senior research scientist at Caltech's Jet Propulsion Laboratory (JPL) in the US.

So, what could be causing the change? Astronomers aren't exactly sure. Moreover, they are astonished by the severity of the temperature changes.

"Temperature variations may be related to seasonal changes in Neptune's atmospheric chemistry, which can alter how effectively the atmosphere cools," Roman said, via CNN. "But random variability in weather patterns or even a response to the 11-year solar activity cycle may also have an effect."

More observations are needed to better understand what is causing the flux in temperatures. Luckily, the state-of-the-art James Webb Space Telescope (JWST) will observe Neptune later this year once it is fully operational. Since JWST has an infrared instrument that can track temperatures with precision, it is possible that this mystery will be solved in the near future.

"I think Neptune is itself very intriguing to many of us because we still know so little about it," Roman said. "This all points towards a more complicated picture of Neptune's atmosphere and how it changes with time."