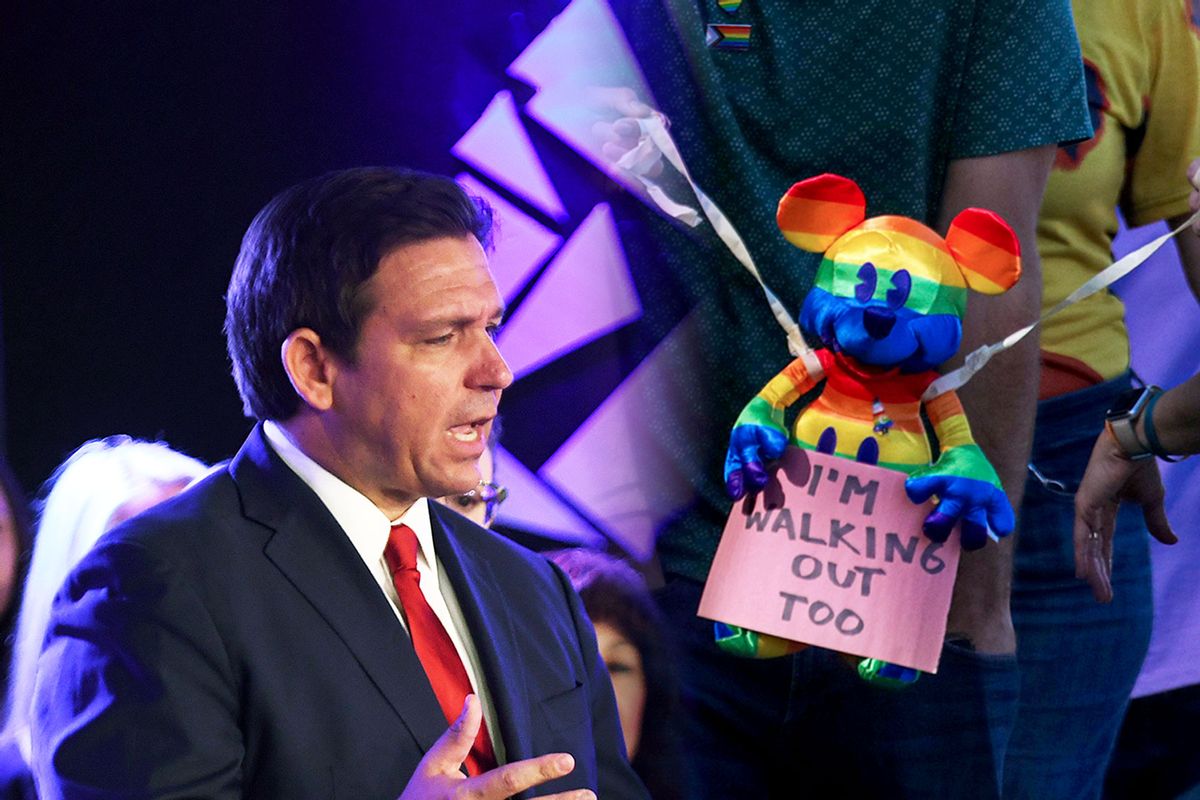 At least one hundred right-wing protesters assembled just outside of Disney World in Orlando, Florida on Saturday in protest of the company's position on the state's recently-passed "don't say gay" bill, holding up banners and flags in support of expanding "parents' rights" in education.

Calling themselves the "Patriot Convoy," dozens of conservative protesters unsuccessfully attempted a car "blockade," that proved to be more of a minor inconvenience than the major headache organizers were surely hoping to cause. Such protests were outlawed by Florida Republicans in reaction to the anti-police brutality protests of 2020, although a federal judge has since ruled the ban unconstitutional.

RELATED: A Trump supporter could be the first Floridian prosecuted under Ron DeSantis' new anti-protest law

The legislation the protesters support was already signed into law by Florida Gov. Ron DeSantis late last month and severely restricts the extent to which educators are allowed to discuss anything related to sex, gender, or family life. Conservatives have baselessly argued that the bill is necessary to prevent child grooming by predatory teachers, but commentators and lawmakers on the left say the measure is simply designed to eliminate any mention of LGBTQ+ experience from the state's public school curricula.

After the bill's signing — and much internal pressure — Disney, one of Florida's largest employers, came out against the measure, touching off an unprecedented political schism between the company and its Republican benefactors in the legislature. Many Republicans have called on Floridians to boycott the company's products altogether.

During Saturday's protest, demonstrators called Disney employees "groomers," implying that the company's objection to the law is tantamount to supporting pedophilia.

One of the demonstrators, Adam Francisco, directly told an ABC affiliate that Disney is preying on school kids.

"I don't think kids should be learning about sexuality or gender until they're a certain age," Francisco said. "And it should be up to the parents and the parents' side. And if the teachers are going to do it, it should be parental approval."

The protest also saw an appearance from state Rep. Anthony Sabatini, a Republican supporter of the measure, who apparently spoke at the rally.

"GREAT to speak at the HUGE rally today in front of Woke @WaltDisneyWorldto protest Disney's stance against parents' rights & their push for a creepy, perverted agenda which includes the sexualization of children," the state lawmaker later tweeted. "This woke communism & corporate tyranny will not stand."

Earlier this month, Sabatini warned of a "living hell" for Disney over the company's stance on "Don't Say Gay," suggesting that the vast suite of legislative perks Disney has benefited from over the decades years might come to an end.

Last week, Florida Republicans specifically threatened to roll back the 1967 Reedy Creek Improvement District, which enshrines Disney's right to self-govern as its own county. The bill allows Disney to set its own taxes, ordinances, and use of its own emergency services.

It's unclear whether that threat is just bluster. Democratic state Rep. Anna Eskamani told The Hollywood Reporter that it's "highly unlikely" that Florida would amend the Reedy Creek Improvement District, but noted that "crazier things have happened in Florida.

Ohio Republican Rep. Jim Jordan, along with several other House Republicans, is threatening to allow Disney's copyright on Mickey Mouse to lapse as early as next year.