Twitter should be treated the way newspapers once were — as a public trust. If Musk gets that, this might work out 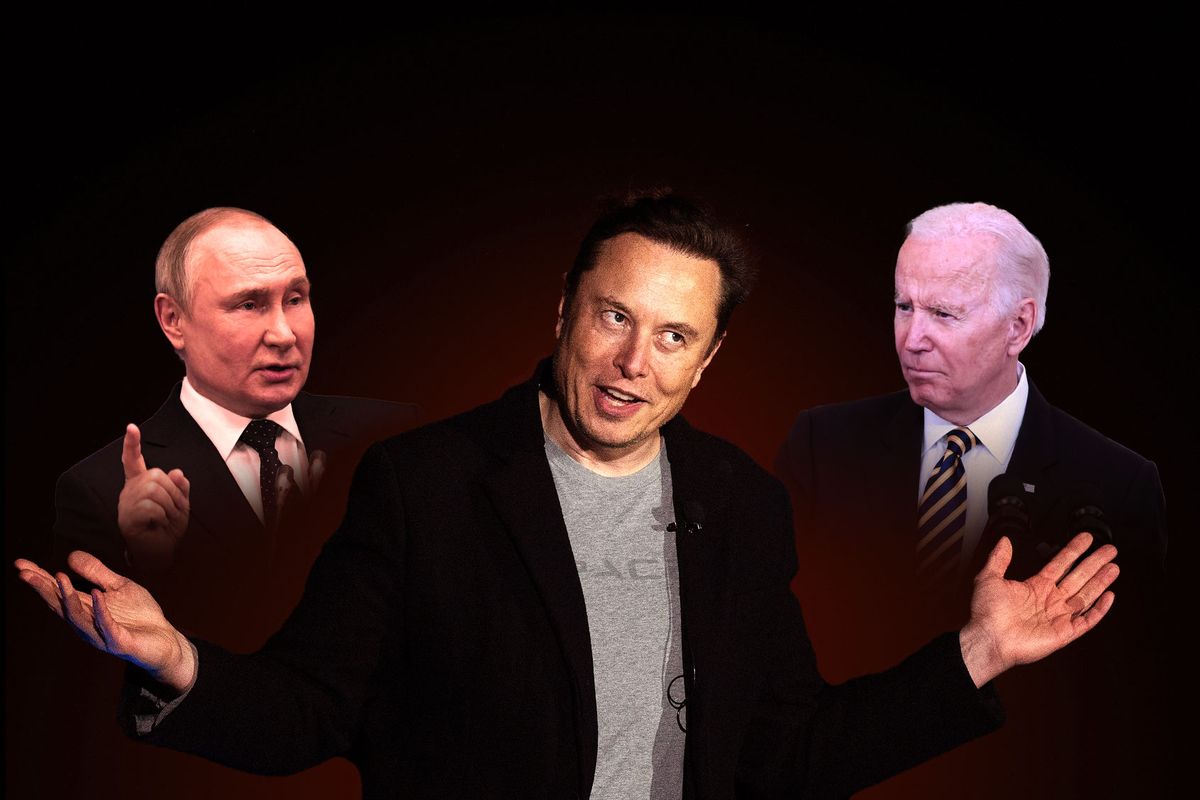 But no single human being should have the ability to influence or impose their individual communication vision on the rest of the world, directly or indirectly. There are 8 billion of us here. I don't mind if you're making money — but your freedom ends where my nose begins, pal.

We've yet to see the effects of Elon Musk's purchase of Twitter and there's lots of speculation that leans heavily into the belief that Musk will embrace the dark side of the force. The Trumpers are convinced it'll mean the "end of libtard domination" of Twitter. Supposedly people are fleeing in droves from Twitter World, fearful, angry or wanting to make some sort of political statement.

I don't know. Surprise me.

Maybe he'll do it right.

Maybe he'll appoint an independent editorial board. Put the company in a trust. Treat it as newspaperman Robert Worth Bingham did his family newspapers. "I have always regarded the newspapers owned by me as a public trust," he said, "and have endeavored so to conduct them as to render the greatest public service."

If Musk treats Twitter as a public trust, operates openly and is transparent doing so, then the world could be better off. I'm not ready to flush it just yet. I think Bingham's legacy is transferable to the Twitter age.

In a tribute published after the sale of the newspapers to Gannett in 1986, Courier Journal vice president Don Towles wrote that "every major progressive step taken by Kentucky in the 1900s to drag itself into the 20th century, screaming and protesting most of the time, was suggested, encouraged and supported by the Louisville papers. The poor were helped, the needy were served, the helpless and infirm were tended because the newspapers did their jobs."

Elon Musk now owns one of the 21st century's largest contributors to public information — on par with, or greater than, the power the Courier Journal had in Kentucky in the last century. With that power, oh mighty Spider-Man, comes great responsibility.

Show me enlightenment. Show me fairness. Show me justice. Enough with the cartoons.

We have enough cartoons today. We're still dealing with the cartoon fishbowl of the last days of Donald Trump at the White House, and we're unfortunately reliving them, courtesy of several thousand recently released text messages revolving around Mark Meadows. That production features a cast of characters including the Pillow Guy, Marjorie Taylor Greene and Louie Gohmert.

Reading these people's texts makes me wonder about their Apgar scores at birth. They are obviously mentally and emotionally compromised, and they compound their lack of abilities with a lack of common sense. That, of course, is just fine for some voters, once again demonstrating why we need to spend more on mental health and education in our fine democratic country.

Jared Kushner also chimed in with a few texts to Meadows during the insurrection. He offered pragmatic ways to make the "crazy" work, while Meadows remained a political juggler handling bottom-of-the-barrel bullshit.  It was wholesale fiction, created by people who care little for reality and treat their discount garbage as Christian relics. Meadows tried his best to keep the crazies happy — and keep Donald Trump in office.

Popping in on occasion was Jason Miller, who offered his best "Try this and see if anything sticks" spin-doctor approach before urging the group to "move on." No one would.

The big question is whether Musk can run Twitter as a public trust, rather than as a robber baron's narcissistic indulgence.

I guess I'm at the "moving on" stage with Elon Musk. He's bought Twitter and the question is whether he can run it as a public trust and not a robber baron's bid for a variety of narcissistic causes, including but not limited to: higher profile, greater fame, fortune, revenge, boredom, curiosity, amusement and the need to play a role as an antihero or straight-up villain.

People invent all kinds of reasons for doing things they shouldn't. That's why lawyers are usually so well compensated.

Musk's purchase of Twitter also underscores the need for a better regulated media. Our ways to communicate with each other have improved exponentially in my lifetime, while the laws that keep those communications fair and accurate have not caught up to the technology, largely because the guidelines we once had — like the FCC's fairness doctrine — ceased to exist before the internet did. We can thank Ronald Reagan for that. Jason Miller is a perfect example of someone who profits from the dysfunction we've become.

The guardrails must be re-established. Our world is at an inflection point and we need factually accurate information to make key decisions.

Vladimir Putin is currently trying to bully the world into submission with implied threats of nuclear or chemical destruction as he struggles to conquer Ukraine.

Since the fall of the Soviet Union in 1991, the world had grown used to worrying less about mutually assured destruction — a concept we'd nervously accepted after the Cuban missile crisis. Until the invasion of Ukraine, more of us worried about "woke culture," being canceled, policing who our neighbors take to bed and how they describe themselves, whether or not a snowball negates the reality of climate change, and the valuable art of curing COVID by ingesting bleach. Putin's chosen war is a global wakeup call to the threat that still exists. Understanding that and the underlying facts can only further our understanding of Russian hegemony and autocracy — especially when Putin stooges like Sen. Rand Paul declare that Ukraine and other countries were once "part of Russia" so we should mind our own business.

Our priorities have languished in the aisles of puerile and salacious content — led there by disinformation, misinformation and an assortment of odd and grotesque human beings who haunt the halls of Congress like demons from the dankest regions of the worst Christian hell — the kind of place Joel Osteen envisions for those who wonder why he lives in such splendor while others suffer. You know, the kind of hell Donald Trump still has wet dreams about, regarding Michael Cohen and anyone who ever angered him.

Trump's followers are boycotting Disney, arguing about the sex of cartoon characters, banning math books and ingesting bleach and horse paste while denying that vaccines work — all while they crow about liberals losing it over Musk's purchase of Twitter.

Meanwhile, President Biden is dealing with the issues soundly enough — but his whole presidency seems to be based on the maxim "action speaks louder than words," and no one is doing much talking.

That's actually a naïve statement: Words are actions, and people have killed over mere words. Chris Rock got smacked over them. The simple fact is that Biden's infrastructure package, signed and enacted before a crowd of nearly 1,000 people on the White House South Lawn, created the largest bipartisan gathering in years. But the Biden administration seems to have grown bored with telling people that he's done more for rural Americans in a single year than Donald Trump did in four, or than anyone else has done in the last two decades. His team is apparently tired of reaching out to middle America and trying to bring swing voters back into the nest. If no one's talking about what you did, they certainly won't remember it when it comes time to vote.

The Biden White House's reluctance to dominate the news with the verve of Trump and with the common sense of Harry Truman leaves the airwaves wide open for bombast from those who love to scream the loudest.

Yes. Americans have a hard time staying focused on what matters. Yes. Twitter is part of that problem. Yes. Musk must deal with that effectively.

How serious is this? Just one example: The threat of the use of weapons of mass destruction in Ukraine remains real, and the longer the conflict goes on the worse that threat becomes.

Former Lt. Col. Alex Vindman, speaking to me on the podcast "Just Ask the Question" this week, explained why he doesn't think Putin will use nukes. The Russian leader sees "no existential threat," Vindman said, and won't go nuclear unless such a threat arises. OK, fine. But whose definition of "existential threat" do we use? The dictionary's or Putin's? Because I assure you they aren't exactly the same.

As Biden said upon his return from Poland, nothing anyone says or does can influence Putin. He marches to the beat of his own drummer, which is a frightening condemnation of a world leader who has the ability to launch nuclear weapons. That pretty much negates Vindman's analysis, and sails over the heads of the mindless arguments on social media.

Can the American people wake up to the existential threat to human survival that we all pose?

After all, Trump and Putin are not unique. The rise of authoritarianism is a worldwide threat. Elon Musk can either be an agent of enlightenment or an agent of chaos with the purchase of Twitter.

Trump and Putin aren't unique: Authoritarianism is a worldwide threat. Musk can either be an agent of enlightenment or an agent of chaos.

The challenge is to communicate fairly and accurately with the American people, and to expect that from each other on social media — and for the government to do its part, by ensuring there are guardrails in place to maintain credibility.

When angry readers in Kentucky canceled their subscriptions to the Courier Journal in the 1930s because the paper supported Planned Parenthood, Barry Bingham — who had taken over the newspaper from his father — gave the angry subscribers their money back. Then he wrote in an editorial that "those objecting to the paper's conduct seem to think a newspaper should not have an opinion which a number of readers do not like. This would mean that a newspaper would have no opinion at all. And having no opinions at all is equivalent to having no principles."

All of which is to say that it's not Elon Musk's opinion that should worry anyone. It's his principles.

In this day and age there is a particular and demonstrable need for people of principle to hold power and control within the communications industry — and not just people who know how to turn a buck.

Elon, bubbeleh, you've got plenty of money. Let's see if you can handle principled public discourse. The ball's in your court.