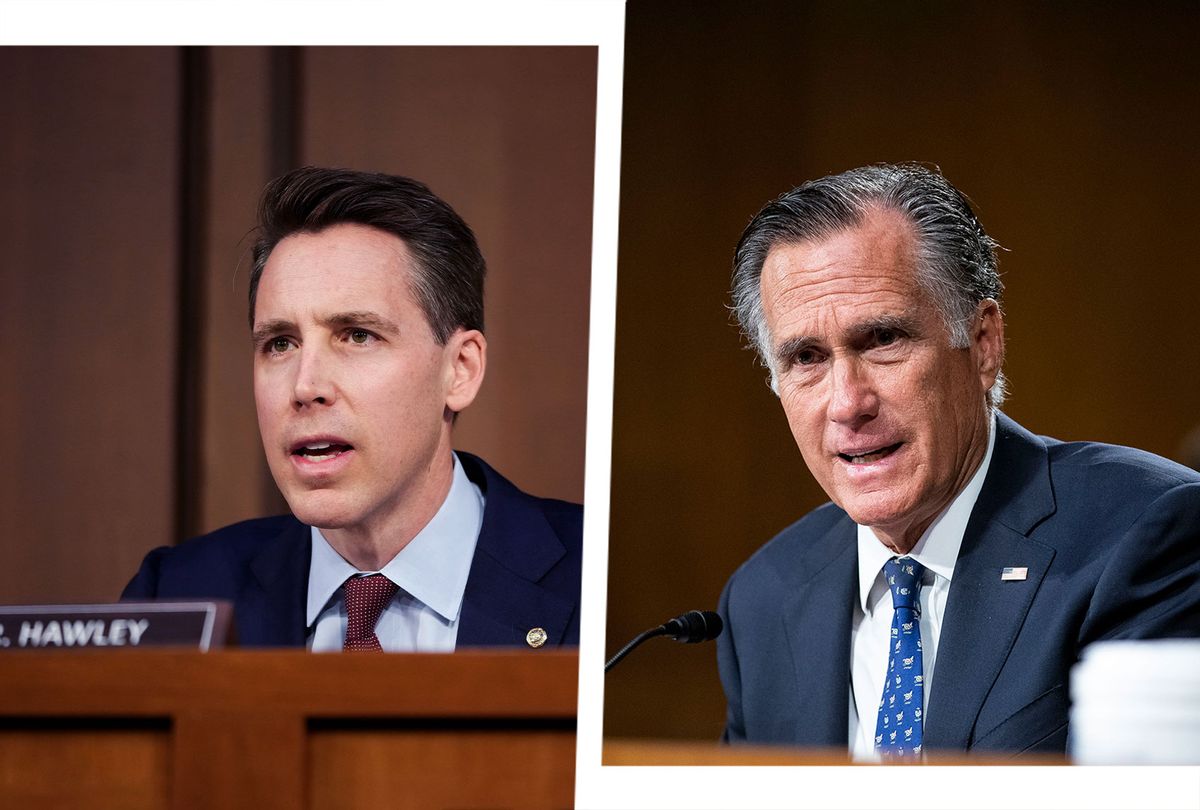 Over the last two years, Republicans argued that President Biden, who made a campaign promise to cancel student debt, does not have legal authority to fulfill that pledge, insisting that the tens of millions of Americans currently crushed by student loans should be forced to pay them down. But now, amid new reports that Biden is considering a partial jubilee, Republicans are backing a bill that would prevent the president from pulling the trigger – a tacit acknowledgment Biden appears to have the power to finally make good on his promise.

On Wednesday, five Senate Republicans introduced the "Stop Reckless Student Loans Action Act," a measure that would end Biden's ability to continue suspending debt payments (for debtholders of a certain income) and prohibit the president from canceling the debt altogether in the case of a national emergency.

"As Americans continue to return to the workforce more than two years since the pandemic began, it is time for borrowers to resume repayment of student debt obligations," Thune said in a statement. "Taxpayers and working families should not be responsible for continuing to bear the costs associated with this suspension of repayment. This common-sense legislation would protect taxpayers and prevent President Biden from suspending federal student loan repayments in perpetuity."

Braun has meanwhile claimed that a jubilee would force people without college degrees to "pick up the tab" for graduates.

"This transfer of wealth is not a move to 'advance equity,' but rather a taxpayer handout to appease far-left activists," he said.

The Republican-led measure comes just weeks after Biden extended his student loan repayment pause for the sixth time over the course of his administration. According to the Federal Reserve, Biden has saved borrowers, who hold roughly $1.7 trillion debt, about $5 billion in interest a month. Those savings have been a lifeline for over 40 million student debtholders, 11.1% of whose loans prior to the pandemic were in default or delinquent by at least 90 days.

RELATED: Student debt is still awful. So why are we students still taking out loans?

Toward the beginning of Biden's presidency, many Republicans and establishment Democrats were adamant that the president could not forgive student debt by executive order. Some experts suggested that only Congress could rubber-stamp such a move, in part because it was the legislature – not the president – that appropriated the funds loaned out to borrowers.

But now, with the GOP waging a pre-emptive counteroffensive amid reports that Biden might relieve the debt, there's more reason to believe that the president has that very authority, as The American Prospect's David Dayen wrote this week.

"There would be no need for such [the GOP's] bill if there was not already authority granted by Congress to the executive branch to suspend, defer, or cancel student loan payments," Dayen argued. "The bill represents an effort to claw that authority back, or at the very least clarify the statute to remove all doubt."

Republicans appear to be targeting provisions contained within the HEROES Act of 2003, an amendment to the Higher Education Act that "allows the secretary of education to waive or modify any requirement or regulation applicable to the student financial assistance programs" in a time of national emergency.

The Stop Reckless Student Loans Action Act would prohibit the president from using the HEROES Act to pause repayments for any longer than 90 days. It would also means-test these pauses and make them subject to the Congressional Review Act, an esoteric law that allows the legislature to overturn actions taken by federal agencies, like the Department of Education.

To be sure, it's unlikely that the Stop Reckless Student Loans Action Act will be approved by a Democratic-majority Senate, paving the way for Biden to leverage the HEROES act without opposition. But even then, Biden will undoubtedly face a deluge of legal challenges, which could stop a jubilee in its tracks.

At present, very little legal precedent exists on whether Biden has the unilateral power to forgive  student debt. No president before him has attempted the move, and "no court has considered where the outer boundaries of the Secretary's HEROES Act authorities lie," as the Congressional Research Services wrote last year.

Luke Herrine, Yale Law Ph.D. who has studied the legality around a potential jubilee, describes the predicament as "a vague terrain."

"Who would sue? I mean, that's the real question," Herrine said. "The [debt] servicers are probably the most plausible, but there are a number of problems with them having standing [...]  They are not guaranteed any amounts of payments under their contracts with the Department of Education, so it's not really clear what their claim is."

There's also the question of whether sweeping debt relief would qualify as a mere "modification" or "waiver," as the Congressional Research Services noted. In the 1992 case MCI Telecommunications Corp. v. AT&T, the Supreme Court declined to defer to the Federal Communications Commission's interpretation of what the company felt was a modification to its tariff policies.

"If a court deemed the HEROES Act sufficiently analogous to the statute in MCI, it might conclude that the power to 'modify any statutory or regulatory provision applicable to the' Title IV programs likewise does not authorize the Secretary to make fundamental changes to statutes or regulations," the Congressional Research Services wrote.

And all of this legal analysis, Herrin said, will have to be weighed against the "political calculus" of issuing a jubilee whose economic implications are still ill-defined.

"First of all, do we think this is good policy? Is it regressive or is it progressive? Is it good politically?" Herrine explained. "I think that's the calculus that's really changed over the past few months."

Biden's pause on student debt repayments is set to expire on May 1. On Monday, Biden indicated to the Congressional Hispanic Caucus that he is open to both extending the repayment suspension and wiping away a portion of the debt, according to The Washington Post.

"I feel very confident that he is pushing on his team to do something, and to do something significant," Rep. Tony Cárdenas, D-Calif., a member of the caucus, told the Post. "That's my feeling.