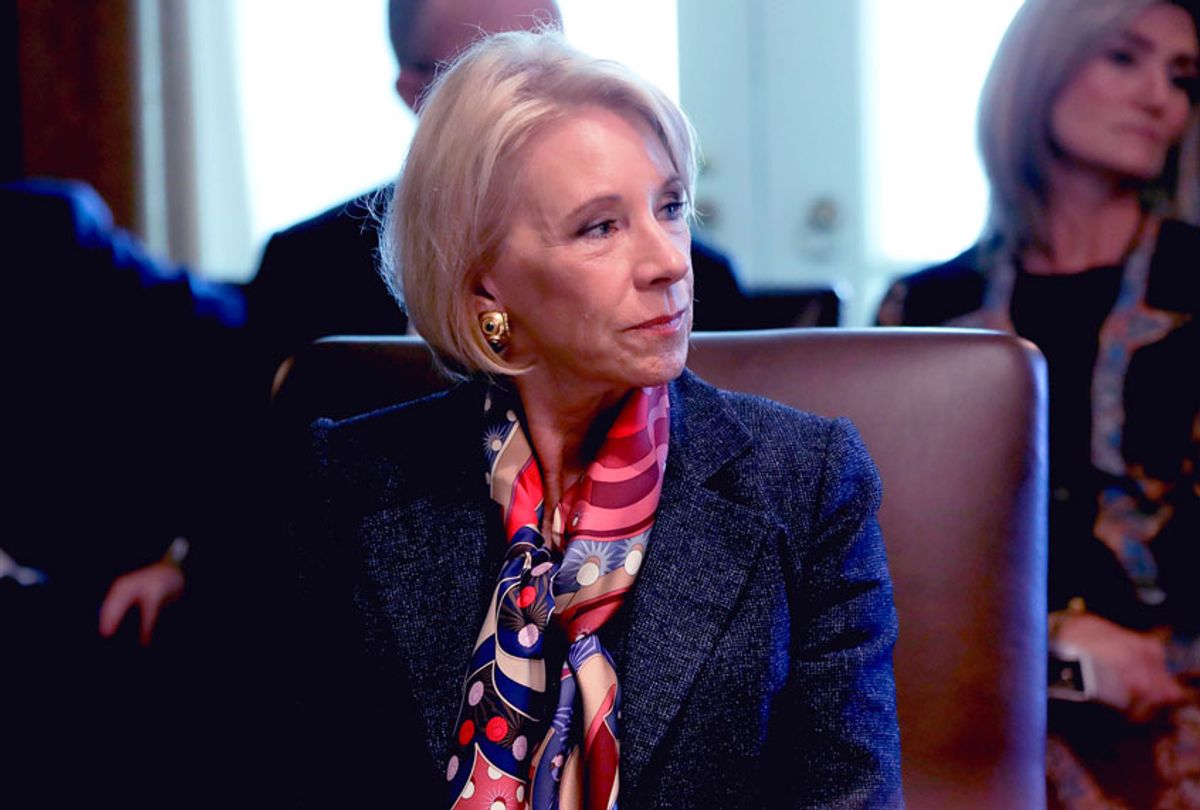 A top Department of Education official appointed by Secretary Betsy DeVos abruptly announced his resignation on Thursday and called for the cancellation of more than $900 billion in student loan debt.

A. Wayne Johnson was appointed by DeVos in 2017 as chief operating officer of the Office of Federal Student Aid, which oversees the more than $1.5 trillion in student debt accrued by millions of Americans. He later moved into a different position, leading an effort to overhaul how the agency handles borrowers and lenders.

Johnson announced that he would resign on Thursday, and called for the cancellation of most of the United States’ outstanding student debt, The Wall Street Journal reports.

Johnson told the outlet that repayment trends suggest that much of the outstanding debt will never be repaid and called for an overhaul of the entire student lending system.

“We run through the process of putting this debt burden on somebody ... but it rides on their credit files — it rides on their back — for decades,” he said. “The time has come for us to end and stop the insanity.”

Johnson, who described himself as a moderate Republican, also announced a long-shot bid for a Senate seat in Georgia that will be vacated when Sen. Johnny Isakson, R-Ga., retires at the end of the year. Johnson told The Atlanta Journal-Constitution he hopes to be appointed to the seat by Gov. Brian Kemp, a Republican, but will run for the seat in the next election if he is not selected. “I intend to follow Senator Isakson’s example as a conservative Republican who is able to work across the aisle in Congress,” he told the outlet.

Johnson said student loan forgiveness would be at the heart of his campaign. Johnson proposed forgiving up to $50,000 for every person with student loan debt, which he said would eliminate the debt of nearly 37 million Americans at a cost of $925 billion. He also proposed a tax credit of up to $50,000 for people who have already paid back their debt. Going forward, Johnson proposed a $50,000 federal voucher that would not require repayment to help every student pay for college.

Johnson called for a 1 percent tax increase on corporate profits to pay for the program, which he told the Journal-Constitution would be “fair, fiscally responsible and future-oriented so that the citizens of Georgia and across America can afford a college education.”

Johnson’s plan would forgive more debt than the plan proposed by Sen. Elizabeth Warren, D-Mass., which would cancel all debt up to $50,000 for families earning under $100,000 per year. Johnson’s plan, which has no income cap, would fall short of the plan proposed by Sen. Bernie Sanders, I-Vt., who has called for the cancellation of all student debt.

Johnson, who previously founded a private student loan firm, told the Journal-Constitution that his background in the industry gives him more credibility to revamp the “fundamentally broken” student loan system.

“A college education is valuable to our citizens and it’s valuable to employers — but right now, only the students pay,” he said. “Employers say they need a better trained workforce. My plan sets forth an easy way to achieve that important goal.”

“Their proposals are crazy,” DeVos told the network. “Who do they think is actually going to pay for these? It’s going to be two of the three Americans that aren’t going to college paying for the one out of three that do.”

Since joining the Trump administration, DeVos has actually made it more difficult for borrowers to cancel their student debt. She has instituted new rules that make it more difficult for students defrauded by for-profit colleges to seek debt relief. Her department has rejected 99 percent of applications from public sector workers seeking debt relief, even after Congress allocated $700 million for the program. A judge recently threatened to hold DeVos in contempt or even jail her after her department sought to collect voided debts from students who had been defrauded by one of the largest for-profit college chains in the country.

Meanwhile, the debt problem continues to grow and an increasing number of Americans support the cancellation of student debt altogether.

Roughly 20 percent of borrowers no longer enrolled in school are behind on their payments, according to data from the Federal Reserve. Much of the debt has fallen on younger Americans. Nearly $500 billion of federal student loan debt is carried by adults under 34 years of age, though people between 50 and 61 still owe about $230 billion in student loans, according to Education Department data.

The average student loan balance hit a record high in 2018, rising to more than $35,000, according to data from Experian.

An NBC News/Wall Street Journal poll published last month found that 41 percent of Americans support canceling all student debt and 64 percent support income-based plans that forgive debt after a borrower has paid off a certain amount. A Politico/Morning Consult poll conducted earlier this year found that 56 percent of voters support Warren’s plan, which would cancel about $640 billion in outstanding student debt.

Older voters, those making over $100,000, and Republicans were more likely to oppose the plan, though among people who currently have outstanding student debt, support rises to 75 percent.