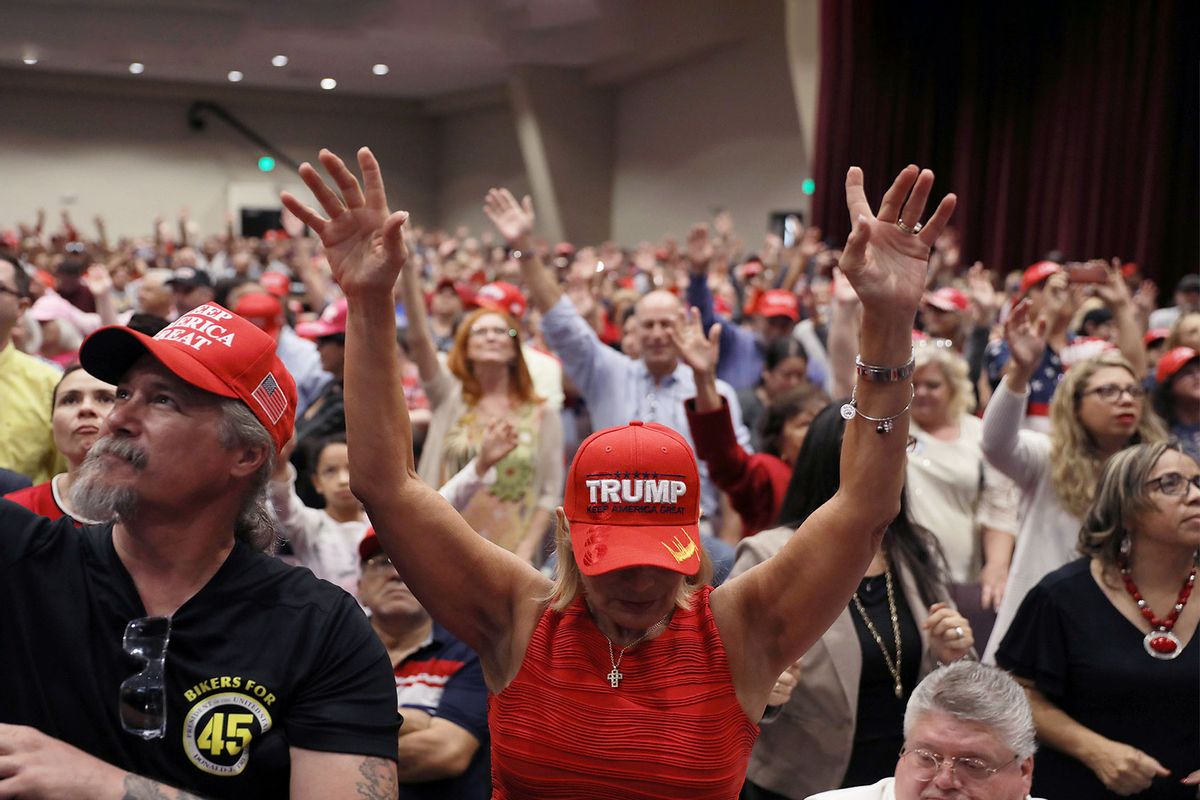 Fran Flynn (C) prays during the 'Evangelicals for Trump' campaign event held at the King Jesus International Ministry as they await the arrival of President Donald Trump on January 03, 2020 in Miami, Florida. (Joe Raedle/Getty Images)
--

"There's one thing that I know for sure," declared Gene Bailey, the pastor of Eagle Mountain Church International, before a crowd of thousands recently gathered at Oral Roberts University in Oklahoma. "The raw truth was on Nov. 3, 2020, President Donald J. Trump won the election."

Later during the summit on the 2020 presidential election, which was broadcast live to a Facebook audience of over 300,000 followers, Hank Kunneman, the pastor of One Voice Ministries, proclaimed: "There is a payback coming!"

The pastor went to rave about how President Joe Biden belongs in prison for "treason" and a "demonic agenda."

The late April event is chilling — but remarkable, mainly for how unremarkable it is.

Forget Jesus Christ and the "good news" about salvation. All across red state America, the true faith of evangelical churches lately often seems more about Donald Trump and trumpeting the Big Lie. As Charles Homans at the New York Times wrote in late April:

In the 17 months since the presidential election, pastors at these churches have preached about fraudulent votes and vague claims of election meddling. They have opened their church doors to speakers promoting discredited theories about overturning President Biden's victory and lent a veneer of spiritual authority to activists who often wrap themselves in the language of Christian righteousness.

In the mainstream media and the eyes of much of the public, there's a secular cast to the false claims that Biden "stole" the 2020 election, which is being used to justify a national GOP campaign to actually steal the election for Trump in 2024.

From Rudy Giuliani sweating through his hair dye to Steve Bannon's self-aggrandizing to the hard-drinking Proud Boys, the face of the Big Lie is that of the all-American dirtbag, someone who is more likely to be out on Saturday harassing women in bars than up early on Sunday for church. But while those figures certainly get attention, the larger threat to democracy likely comes from the well-organized, well-funded white evangelical movement, which has managed to reorganize itself around Trump's Big Lie out of the glare of much mainstream media attention.

From the beginning, the religious right was the backbone of Trump's Big Lie. As Kathryn Joyce reported for Salon on the anniversary of the January 6 insurrection, in the run-up to the riot, "allegations about the 'stolen' election became nearly inseparable from messages of apocalyptic faith." The crowd that turned out that day was largely driven by religious fervor. Popular religious right figures were responsible for sending thousands of people to the Capitol to do Trump's bidding. Since then, the Christian nationalist devotion to the Big Lie has only grown stronger. Six out of 10 white evangelicals claim Biden stole the 2020 election, compared to 37% of white Christians from mainline churches.

The enthusiasm for the Big Lie among white evangelicals comes back primarily to one thing: Racism.

78% of white evangelicals agreed with the statement that "America is in danger of losing its culture and identity."

Scrape away the easily disproven conspiracy theories about voting machines and stolen ballots and what you're left with is the animating belief of the Big Lie, which is that conservative white people are entitled to rule, no matter what. The Big Lie puts a moral gloss on this argument, by recasting the opponents of democracy as the "victims" of a "stolen" election. Actions like trying to throw out the vote total in racially diverse cities in 2020 and rewriting election laws to marginalize voters of color, however, tell the true story. The Big Lie is about preserving white supremacy, even if the cost is ending democracy.

Anthea Butler, a religious studies professor at the University of Pennsylvania and author of "White Evangelical Racism: The Politics of Morality in America" explained the history of the evangelical movement last year in an interview for Religion & Politics.

"There's a prevalent belief around evangelicalism that the movement was formed in the 70s in response to Roe v. Wade," she noted. In reality, however, "It wasn't abortion that fired them up—it was integration, taxation, busing, and similar issues."

As Dartmouth historian Randall Balmer has carefully documented, while religious right leaders like Jerry Falwell liked to portray their movement as anti-abortion and anti-LGBTQ, it really started as a pro-segregation movement. Falwell first made a name for himself by preaching about the evils of integration. He started really getting into political organizing around the issue of the federal government stripping tax-exempt status from private schools, such as his own Lynchburg Christian School, which barred Black students. Falwell later publicly recanted his segregationist beliefs, but only in the most surface of ways. White supremacy is still foundational to white evangelical culture, which is why they continue to be Trump's strongest base of support.

It's easy to see how much racism is in the DNA of white evangelical culture in a recent New Yorker article about Liberty University, which was founded by Falwell and, until recently, was run by his son Jerry Falwell, Jr. University leadership talks a big game about racial diversity, but whenever there's even a hint of a challenge to white supremacy on campus, the administration comes down on students like a hammer. As Megan K. Stack reports, "members of the student government drafted an anodyne condemnation of white supremacy" in response to the deadly white supremacist march in Charlottesville, Virginia in 2017, but the administration functionally blocked it. Falwell then defended Trump's claim that the neo-Nazis and other white nationalists were "very fine people."

White evangelicals are embracing conspiracy theories, Trumpism, and, ultimately, a war on democracy itself.

A similar fight went down when a small group of students tried to organize a demonstration in support of Black Lives Matter after the murder of George Floyd in 2020. The administration totally panicked in response, as Stack notes:

They were told to stop using the words "Black lives matter" and "protest"; "demonstration," they recalled the administrators admonishing them, sounded less violent. They were asked to organize an academic discussion instead of a protest, or perhaps an athletes-only gathering in one of the sports halls. "They were just being very passive-aggressive," Williams said. "They were just trying to water down the statement 'Black lives matter.' "

When the students continued to press forward with the plans, the administration refused to provide campus police protection. Afterward, the school released a statement emphasizing that it was "student-led and student-created," lest anyone mistake them as supporting this anti-racist movement.

RELATED: Jerry Falwell Jr. is the true face of white evangelicals — and dumping him changes nothing

A November PRRI poll found that while they espouse anti-racist views when asked directly about race, 78% of white evangelicals agreed with the statement that "America is in danger of losing its culture and identity." To my mind, that question is an excellent measure of white supremacist sentiment, as it's hard to imagine what else people are thinking of when they talk about American culture and identity. They certainly aren't reacting to the long-standing tradition of America as a nation of immigrants, the traditions of secularism, or any of the other progressive values about equality and freedom that the liberal majority of Americans believe in. Instead, what they clearly believe is that people like them are the only legitimate rulers and that it's "fraud" if the majority of Americans disagree.

The truth is that white evangelicals are, in fact, a shrinking portion of the American public, but not because of immigration or Black Lives Matter or antifa or any of the other bogeymen that Republican propagandists prop up. It's because of evangelicals' own intolerance and bigotry. Younger Americans simply don't truck with it — even at Liberty University, students speak out about it! — and so are leaving the pews in large numbers. Heaven forbid, however, that evangelicals admit they only have themselves to blame and change their views to become more accepting of diversity. Instead, white evangelicals are embracing conspiracy theories, Trumpism, and, ultimately, a war on democracy itself.