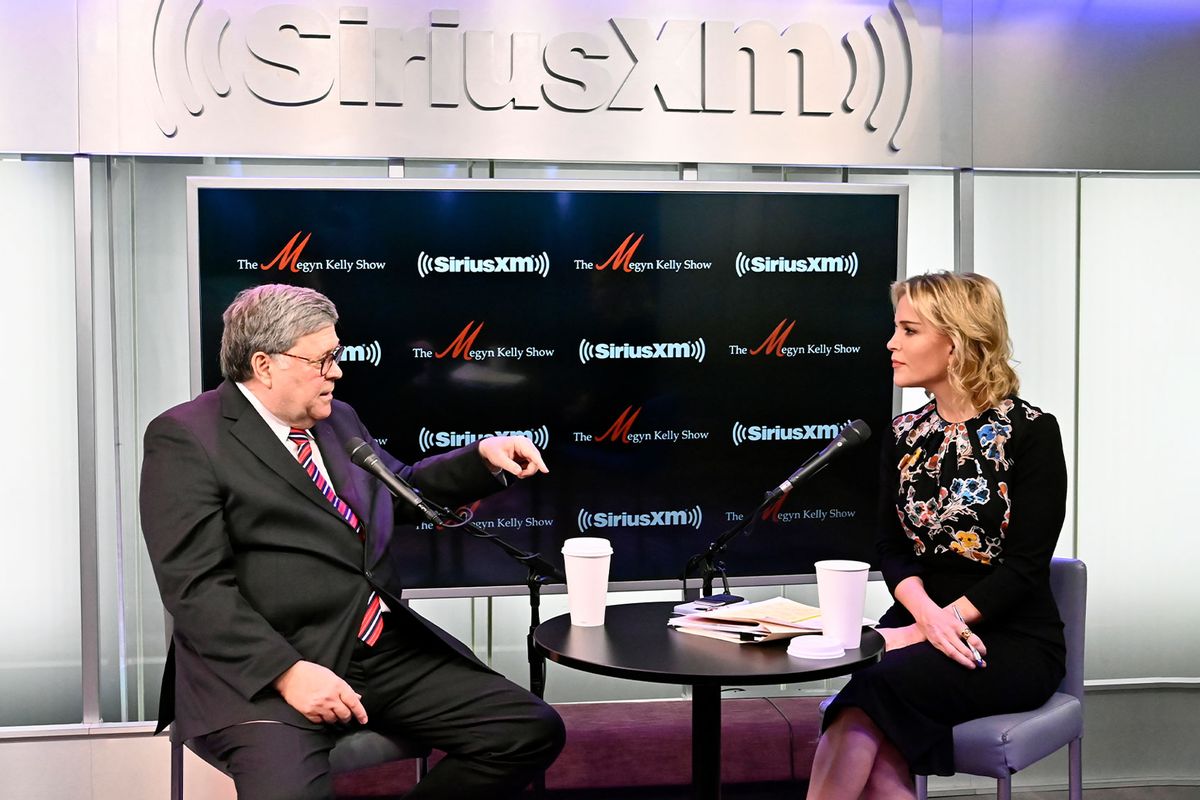 SiriusXM's Megyn Kelly talks with former Attorney General Bill Barr during a taping of The Megyn Kelly Show at SiriusXM studios on May 03, 2022 in New York City. (Astrid Stawiarz/Getty Images for SiriusXM)
--

SiriusXM host Megyn Kelly on Tuesday pushed back on claims made by Donald Trump's onetime attorney general Bill Barr, who suggested that whoever recently leaked a Supreme Court opinion draft on abortion could be charged with obstruction of justice.

The exchange came just a day after Politico published a leaked copy of the Supreme Court's majority opinion draft on Roe v. Wade, the landmark 1973 case that enshrined America's constitutional right to an abortion.

During her interview with Barr on SiriusXM's The Megyn Kelly Show, Kelly questioned if and how the person who leaked the document could be prosecuted.

"Is this a crime? It's clearly unethical. And if they're a lawyer, they should be disbarred immediately," she said. "What crime could this possibly be?"

"Well, it could be obstructing the administration of justice, the due process of justice," Barr responded.

"That's a stretch, though, no?" Kelly asked.

"Well, no," Barr said. "Obstruction means you're attempting to influence through some kind of wrongdoing.

On Tuesday, the Supreme Court ordered a formal investigation into the leakage of its draft shortly after confirming its veracity. According to Chief Justice Roberts, the Marshall of the Court will be spearheading the probe.

"This was a singular and egregious breach of that trust that is an affront to the Court and the community of public servants who work here," Roberts said. "We at the Court are blessed to have a workforce — permanent employees and law clerks alike — intensely loyal to the institution and dedicated to the rule of law. Court employees have an exemplary and important tradition of the Court."

Jonathan Turley, a George Washington University law professor who specializes on the Supreme Court, told the Washington Post that the leak was the "greatest security breach in the history of the court."

"It's a very insulated, monastic and personal environment," Turley, adding that "a scandal of this kind can chill those deliberations that are based on a sense of mutual trust."

Florida Republican Gov. Ron DeSantis described the leak of the draft opinion as a "judicial insurrection."

It remains unclear how or if the potential leaker will be punished. As the Post noted, the Justice Department has said that it is ill-advised to prosecute anyone who "obtained or used the property primarily for the purpose of disseminating it to the public," meaning that it's possible the wrongdoer will not be criminally prosecuted.