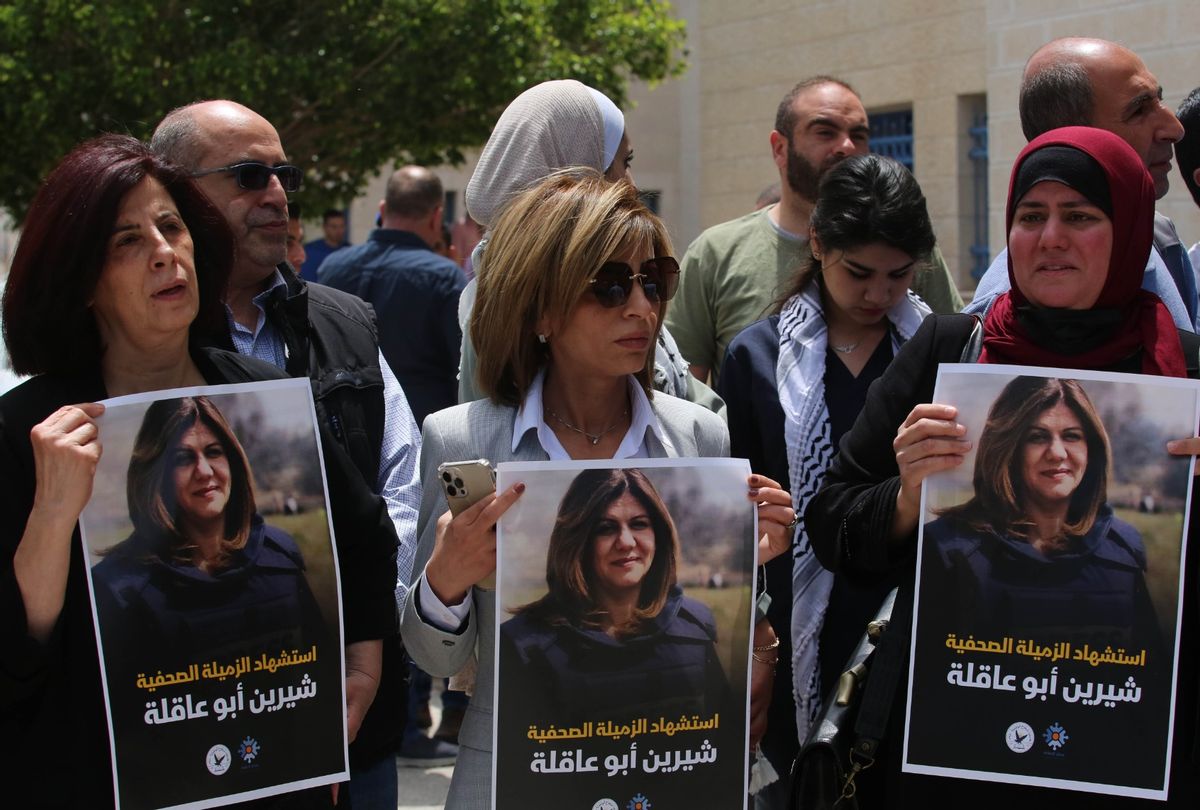 Press members holding photos of female reporter of Al-Jazeera television channel Shireen Abu Akleh, died as a result of fire opened by Israeli soldiers, are seen in front of the hospital as Akleh's dead body is brought to Al- Najah Hospital for autopsy in Nablus, West Bank on May 11, 2022. (Nedal Eshtayah/Anadolu Agency via Getty Images)
--

The media outlet Al Jazeera accused Israeli forces of "deliberately targeting and killing our colleague" on Wednesday after Palestinian journalist Shireen Abu Akleh was shot in the face while covering a raid on the Jenin refugee camp in the occupied West Bank.

In a statement, the Al Jazeera Media Network said that Abu Akleh—who worked as the publication's Palestine correspondent—was wearing a press jacket that clearly identified her as a journalist when Israeli forces shot her "with live fire."

Al Jazeera, which is based in Qatar, called the attack "a blatant murder," saying Abu Akleh, 51, was "assassinated in cold blood." Abu Akleh was an American citizen.

Al Jazeera Media Network condemns this heinous crime, which intends to only prevent the media from conducting their duty. Al Jazeera holds the Israeli government and the occupation forces responsible for the killing of Shireen. It also calls on the international community to condemn and hold the Israeli occupation forces accountable for their intentional targeting and killing of Shireen.

The Israeli authorities are also responsible for the targeting of Al Jazeera producer Ali al-Samudi, who was also shot in the back while covering the same event, and he is currently undergoing treatment.

Al Jazeera extends its sincere condolences to the family of Shireen in Palestine, and to her extended family around the world, and we pledge to prosecute the perpetrators legally, no matter how hard they try to cover up their crime, and bring them to justice.

Footage from the scene shows the moments after Abu Akleh was shot.

(Warning: The video is disturbing)

The Israeli government swiftly denied responsibility for killing Abu Akleh and wounding al-Samudi, claiming that they may have been shot by "Palestinian gunmen."

"There is a considerable chance that armed Palestinians, who fired wildly, were the ones who brought about the journalist's unfortunate death," said Israeli Prime Minister Naftali Bennett.

But al-Samudi, speaking to the Associated Press following the incident, dismissed the Israeli government's narrative as a "complete lie."

"He said they were all wearing protective gear that clearly marked them as reporters, and they passed by Israeli troops so the soldiers would know that they were there," AP reported. "He said a first shot missed them, then a second struck him, and a third killed Abu Akleh. He said there were no militants or other civilians in the area—only the reporters and the army."

An outpouring of grief and tributes followed news of Abu Akleh's killing.

Yousef Munayyer, a Palestinian-American political analyst, wrote on Twitter that "Shireen was one of the bravest, longest-standing Palestinian journos and an inspiration to so many Palestinians, especially young women in the field of journalism."

In an interview, Abu Akleh's friend and colleague Dalia Hatuqa said that Shireen "was there in every town, every Palestinian town, village, alleyway, refugee camp."

"Everybody knew her name," Hatuqa continued. "Everybody welcomed her. She wanted to do the stories that nobody else wanted to do. And she gave a voice to a lot of people who we otherwise wouldn't have heard from."