"The potential for violence that we face is very real" 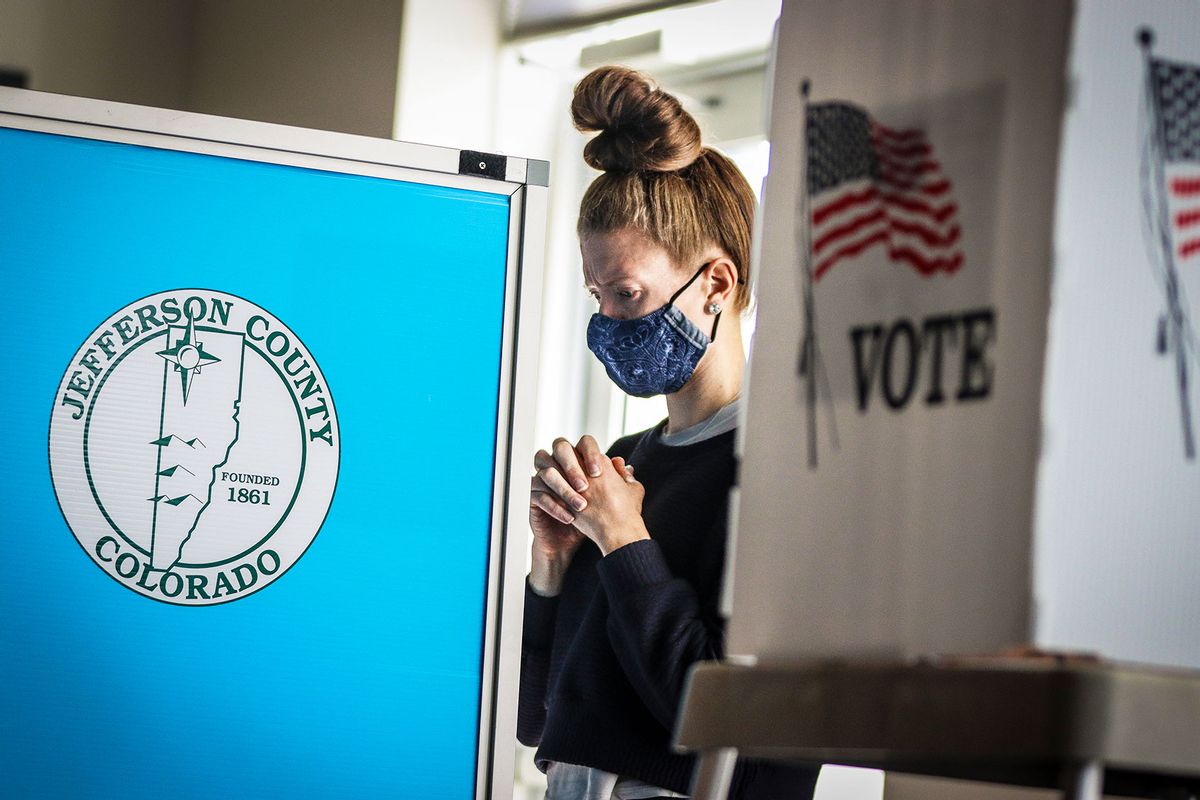 A woman says a quick prayer before turning in her ballot at Edgewater City Hall on November 3, 2020 in Edgewater, Colorado. (Marc Piscotty/Getty Images)
--

Colorado is reportedly being targeted an election fraud hotspot by various pro-Trump groups who believe that 2020 presidential election was stolen from Donald Trump, according to ABC News.

On Monday, the outlet reported that election officials in the Centennial State have been wearing bulletproof vests and have undergone active shooter preparedness training in response to the possibility of right-wing violence.

Colorado county clerk Josh Zygielbaum told ABC that "the potential for violence that we face is very real."

In Adams County, where Zygielbaum works, election facilities are currently under security review by the Department of Homeland Security. The county is also working jointly with the local, state, and federal authorities to ensure that employees remain safe.

Clerk Paul López, whose Denver-based office had to be relocated over security concerns since it was on the first floor, told the outlet that "folks who think they can intimidate election workers and try to stop us from being able to do our job are absolutely incorrect."

"We will defend our democracy, and we will do it in a way that inspires people to come to the polls and not scare them away," he added.

Another clerk, Lori Mitchell from Chaffee, said that she's received numerous threats and at one point thought she was about to get shot.

"I saw somebody lay their right hand over their left arm and pull what looked like a gun to me," Mitchell told the outlet. "It ended up being a squirt gun," she added, "but it was still one of the most frightening days of my life."

Conspiracies around Colorado's election security appear to stem from the recent rhetoric of Tina Peters, a right-wing Mesa County clerk who was arrested by authorities for recording an election proceeding and lying to a judge about it. Peters, who announced back in February that she's running to oust Griswold in 2022, has been one of the most vocal election deniers in recent months. Last summer, Peters attended a "cyber symposium" hosted by MyPillow CEO Mike Lindell, another vociferous election denier.

Matt Crane, executive director of the Colorado County Clerks Association, told ABC News that the Centennial State is "one of the current epicenters of the Stop the Steal movement."

"And so we are concerned and very worried about the influence and pressure being put on election officials," Crane added. "They are incredibly understaffed and overworked, and now they have to deal with the emotional toll that comes from knowing that you have to do things to protect yourself."