By playing the victim of "cancel culture," Fox recasts white nationalism as rebellion instead of violent racism 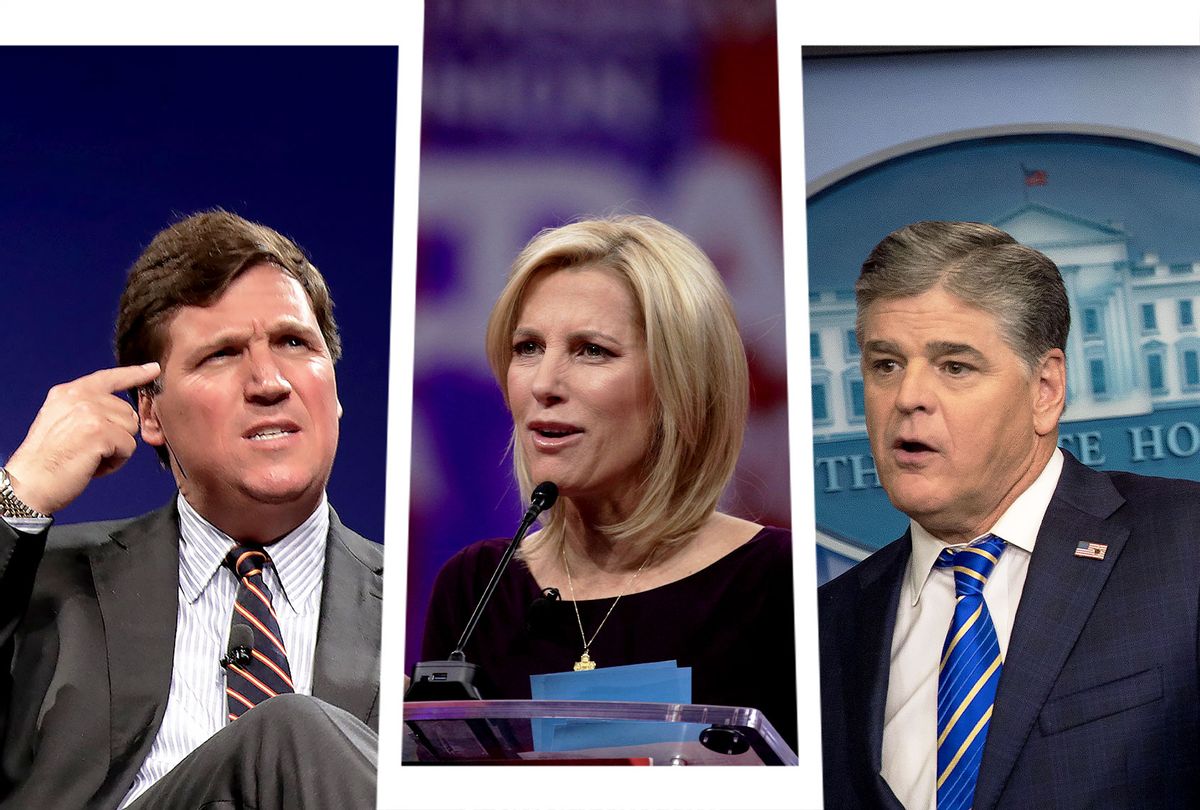 The bodies of the mostly-Black victims of the white nationalism-inspired mass shooting in Buffalo weren't even cold on Saturday before the folks at Fox News identified the real victims here: White conservatives. As I predicted they would on Sunday, the whining from right-wing media has since reached ear-piercing levels of shrill in response to mainstream media correctly pointing out that Republicans and their media have been hyping the "great replacement" conspiracy theory that shooter Payton Gendron used to justify the killing of 10 people.

But this isn't just an attempt to evade accountability.

Fox News pundits are now exploiting the Buffalo shooting to draw their viewers further into white nationalism. Network personalities are romanticizing the hateful ideology that allegedly inspired a massacre as a dangerous truth that the "elite" are trying to suppress. This shooting really illustrates how Fox News has created a victim narrative for its viewers that is so potent that no event is so horrible or violent — including a deadly insurrection in the Capitol or the mass murder of innocent people — that can't be weaponized by the propaganda machine to further radicalize Republican voters.

Unsurprisingly, at the front of the remorseless pack was Tucker Carlson. Fox News' top star was already being called out as the biggest mainstreamer of the "great replacement" conspiracy theory, a ridiculous notion drawn from neo-Nazis and other white supremacists that a cabal of Democrats is masterminding demographic change in order to marginalize white Christians. His response on Monday was a masterful bit of propaganda, using Saturday's horrorshow to convince his viewers, who are already sympathetic to the terrorist's views, to double down on racist conspiracy theories.

"Within minutes of Saturday's shooting, before all bodies of those 10 murdered Americans had even been identified by their loved ones, professional Democrats had begun a coordinated campaign to blame those murders on their political opponents," he raged.

Carlson really does know how to do conspiracy theory. In reality, the "great replacement" theory is widely denounced because it's a racist lie. But he spins this universal condemnation as evidence that Democrats must have "coordinated" the criticism. This, in turn, fits in with a larger narrative that Carlson has been pushing for years now, which is that liberals disparage racist ideas not because they're wrong, but because they're right. Carlson wants his audience to believe these ideas are so true that they're "dangerous" to the "elites," and that they're "censoring" the ideas to keep their powerful truth from getting out.

This is generally how the "cancel culture" narrative works for the right. Ideologies like white nationalism, much less conspiracy theories like "great replacement," fall apart if you think about them too carefully. So rather than defend these ideas on the merits, propagandists portray the ideas as dangerous truths that a shadowy cabal tries to suppress. The implication is that the best way to rebel against the mythical liberal oppressor is to embrace these racist ideas.

Every mass shooting or right-wing riot creates an opportunity for right-wing media to play the victim, further endearing themselves to their audience and allowing them to portray racist ideas at dangerous truths.

The Fox News pitch boiled down: Be a white nationalist because it triggers the liberals.

Carlson wasn't the only host using a conservative victimization narrative to reinscribe the "great replacement" narrative for Fox News viewers. Laura Ingraham ranted about how the media "tried to censor opposing views" and they "tried to criminalize their political opposition after January 6th," but "none of the anti-free speech tactics ever worked." Again, criticism is equated with censorship. Again, the Fox News host doesn't really try to defend these rancid political views. Again, the pivot is to a pitch that her audience adopts insurrectionism, COVID-19 denialism, and white nationalism in order to rebel for "free speech."

RELATED: Doubling down on "great replacement" paranoia: How the right is reacting to the Buffalo shooting

Oh his Fox News show, Jesse Watters was banging the same drum, arguing that condemnations of racism are merely attempted to "manipulate" people with "guilt." "There are very powerful forces in this country that want you to be distracted," he insisted, characterizing any effort to eradicate the racism that fueled these murders as an effort to change the subject from gas prices and inflation. The implication is not subtle: If Democrats want to shame the racism out of you, you must cling to it harder. And, of course, deny all along that it's racism and instead argue that it's just "truth."

The Daily Wire is for that portion of the right-wing audience that is too dim to understand what Fox News is arguing through implication, and needs it spelled out more directly for them. Host Matt Walsh was only too happy to do this, whining about the mainstream media correctly identifying "great replacement" as a conspiracy theory. Instead, he insisted that it's "just a fact" that "they want to replace, especially white male voters, with voters who they think are going to be beholden to them."

Donald Trump himself is never one for the more subtle propagandistic techniques of Carlson or Ingraham. He was also blunt on Fox News host Sean Hannity's radio show, claiming immigration is "like a military invasion."

As Nicholas Confessore reported in the recent — and surprisingly gloves-off — New York Times deep dive into Tucker Carlson, Fox News long ago stopped seeing condemnation from mainstream media and liberals as a negative thing, and now instead see it as a selling point.

RELATED: Expert panel on the Buffalo shooter and what he stands for: "He was not a lone gunman"

"Carlson and his team had learned to work the calls for boycotts and cancellation into their programming playbook," Confessore wrote. "Mr. Carlson would grab third rails on race or immigration, then harvest the inevitable backlash, returning the next evening to roast his critics for trying to suppress an obvious truth." The strategy "boosted the audience's loyalty to Fox," he continued, because it allows Carlson to spin a tale where he and his audience are in the trenches together, fighting against "cancel culture." But this tactic doesn't just increase viewer loyalty to Fox News. It also increases their willingness to adopt some of the ugliest ideas the network is peddling, including the "great replacement" conspiracy theory.

Tucker Carlson wants his audience to believe these ideas are so true that they're "dangerous" to the "elites," and that they're "censoring" the ideas to keep their powerful truth from getting out.

"Great replacement" used to be a fringe idea that even racist Republicans would dismiss as looney a few years ago. But, as I noted Sunday, polling shows half of Republican voters now buy into the "great replacement" paranoia. That's after these ideas fueled multiple mass shootings, the 2017 race riot in Charlottesville, and the January 6 insurrection. All of that violence, it seems, only served to make white nationalism more popular on the right.

In light of all this, one has to assume that, far from trying to avoid liberal outrage in the aftermath of this shooting, Carlson and company welcome it. Every mass shooting or right-wing riot creates an opportunity for right-wing media to play the victim, further endearing themselves to their audience and allowing them to portray racist ideas at dangerous truths. That's why they don't seem to care at all that their propaganda is fueling violence. On the contrary, the violence is used to fuel a machine of right-wing self-pity and aggrievement, further driving Republican voters towards fascism.

Not that any of this should discourage journalists, Democratic politicians, or progressives in general from calling out the violent rhetoric or the racism. Yes, such condemnations are being weaponized by Fox News in order to grow conservative support for radical ideas. But it also helps prevent such ideas from spreading to the larger population.

Republicans need some amount of moderate support to succeed, which they can only get by hoodwinking moderates into thinking they're not as bad as they actually are. Calling out GOP radicalism is absolutely necessary. Trump, Carlson, and company are going to keep pushing their base towards the far right. Until they start facing real consequences at the ballot box for doing so, this situation is just going to get worse.