"I don't make the decision to endorse an opponent to a colleague in my caucus lightly," top progressive says 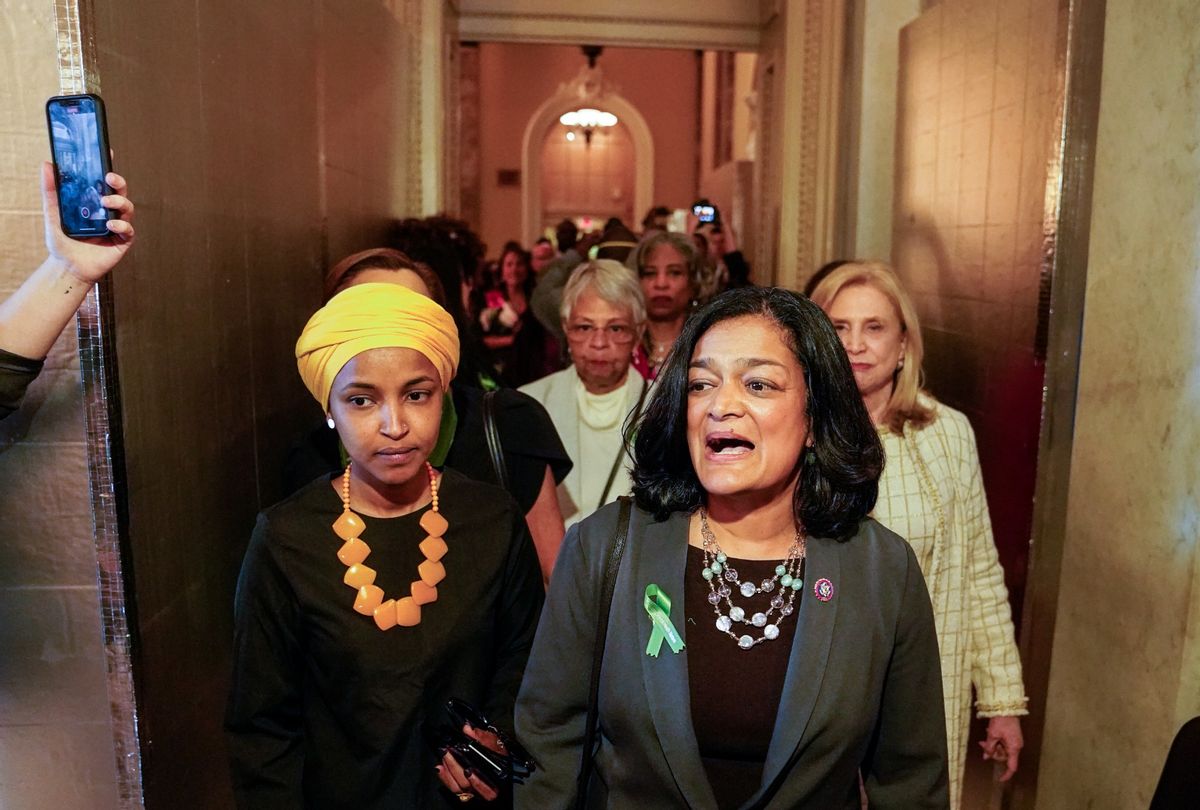 Rep. Pramila Jayapal (D-Wash.) and members of the US House of Representatives protest near the Senate Chamber ahead of a vote on an abortion rights bill on Capitol Hill on Tuesday, May 11, 2022. (Photo by Jabin Botsford/The Washington Post via Getty Images)
--

"At a time when our reproductive freedoms are under attack by an extremist Supreme Court, we must elect pro-choice candidates that will fight to make sure abortion remains the law of the land," Jayapal, D-Wash., said in a statement to Politico just days out from next Tuesday's primary runoff.

"I don't make the decision to endorse an opponent to a colleague in my caucus lightly," Jayapal added, noting that it's atypical for a sitting member of Congress to endorse primary challenges against incumbents in their party—though a number of prominent lawmakers, including Sen. Bernie Sanders, I-Vt., and Rep. Alexandria Ocasio-Cortez, D-N.Y., have also endorsed Cisneros.

"However," Jayapal continued, "the freedom for people to make choices about our own bodies is at stake, and I simply cannot stand by when there is a strong pro-choice, pro-worker Democrat ready to step in."

Cisneros, an outspoken supporter of Medicare for All, a Green New Deal, and other top progressive priorities, fell just shy of defeating Cuellar in 2020, and she forced a runoff with the right-wing Democrat in the first round of voting earlier this year.

Despite Cuellar's steadfast opposition to abortion rights, climate action, and other key elements of his party's agenda, the top three Democrats in the House—Speaker Nancy Pelosi, D-Calif., Majority Leader Steny Hoyer, D-Md., and Majority Whip Jim Clyburn D-S.C.—have endorsed the corporate-funded incumbent's reelection bid and campaigned on his behalf in the final stretch of the race.

Earlier this month, Cisneros called on the House Democratic leadership to drop its support for Cuellar, declaring that "with the House majority on the line, he could very much be the deciding vote on the future of our reproductive rights and we cannot afford to take that risk."

"On May 24th, we will defeat the last anti-choice Democrat and South Texas will finally have a representative in their corner that will fight for their healthcare and freedom," Cisneros said in a statement. "I hope Democratic Party leadership won't stand in the way of delivering for South Texans. I am ready to work with them to deliver on the Democratic agenda."