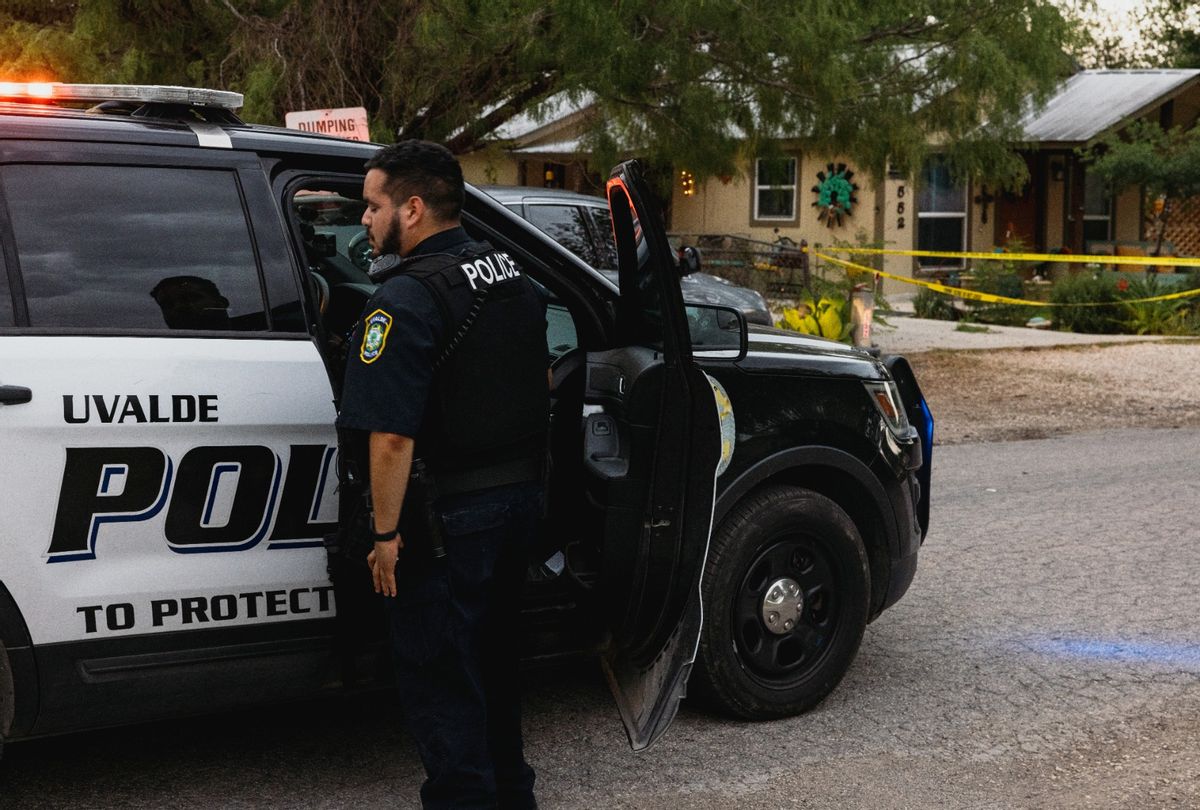 Police gather outside the home of suspected gunman 18-year-old Salvador Ramos on May 24, 2022 in Uvalde, Texas. (Photo by Jordan Vonderhaar/Getty Images)
--

Friends grew increasingly concerned about the behavior of an 18-year-old who gunned down at least 19 children and two teachers at a Texas elementary school, but they were still shocked to learn of his brutal actions.

Salvador Rolando Ramos shot and critically wounded his grandmother before going on a rampage at Robb Elementary School with weapons he legally purchased this month, just after turning 18 years old, before he was fatally shot by police, and former friends struggled to process the news after the shooter's identity went public, reported the Washington Post.

"I couldn't even think, I couldn't even talk to anyone," said Stephen Garcia, who had been Ramos' best friend in eighth grade. "I just walked out of class, really upset, you know, bawling my eyes out, because I never expected him to hurt people."

"I think he needed mental help," Garcia added, "and more closure with his family, and love."

Ramos was frequently bullied by classmates for his stutter and pronounced lisp, said Garcia, who moved to another part of Texas when his mother relocated for her job.

"He just started being a different person," Garcia said. "He kept getting worse and worse, and I don't even know."

Ramos dropped out of school, started wearing all black clothing and military boots, and longtime friend Santos Valdez Jr. noticed similar changes, such as the time he showed up to a park to play basketball with cuts all over his face, which he initially blamed on a cat.

"Then he told me the truth, that he'd cut up his face with knives over and over and over," Valdez said. "I was like, 'You're crazy, bro, why would you do that?'"

Ramos told him he'd done it for fun, and Valdez said Ramos drove around sometimes at night with another friend and shot at random people with a BB gun and egged cars, and he started posting photos of automatic rifles on social media -- including a pair posted four days ago -- and accounts of his troubled home life.

"He posted videos on his Instagram where the cops were there and he'd call his mom a b*tch and say she wanted to kick him out," said classmate Nadia Reyes. "He'd be screaming and talking to his mom really aggressively."

Multiple individuals close to the family, including Reyes, told the newspaper that Ramos' mother used drugs, and he had moved to his grandmother's home several months ago, and the grandmother was in the process of evicting the mother from a home that she rented to her.