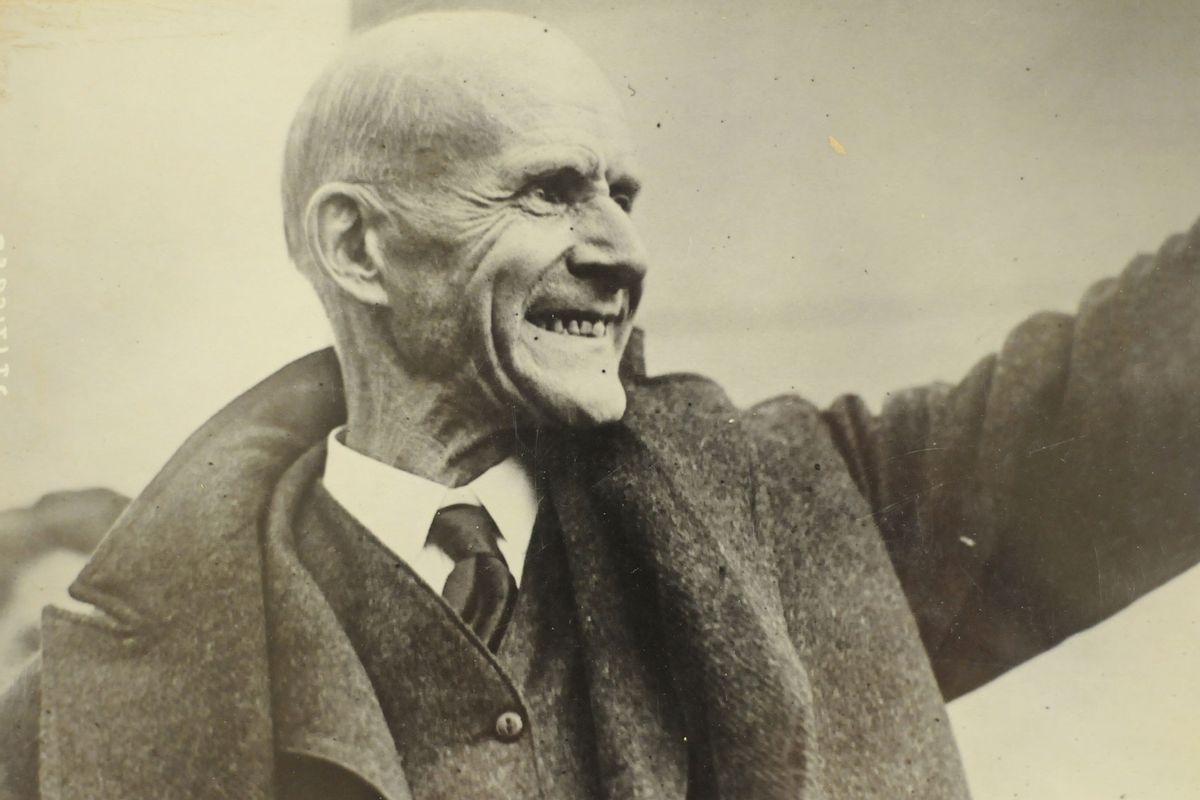 Nothing divides Americans like the question of free speech: What it means, who deserves it and who does not. Conservatives like to complain about being "censored" or "canceled" for their attacks on LGBTQ rights or mask mandates, but lately have started trying to impose all kinds of restrictions on speech in education, especially on issues of gender identity, sexual orientation and race.

When it comes to the legendary Eugene Victor Debs, however — a leading labor and political activist in the late 19th and early 20th century — there's just no question: He was a martyr for free speech and a case study in overcoming oppression. When Debs was sent to prison for speaking truth to "the man" — and in this case, it really was The Man, meaning President Woodrow Wilson — he fought back by deciding to run for president himself.

RELATED: We celebrated "free speech" this week — just as it's slipping away from us

Our story begins on June 16, 1918, on a balmy afternoon in Canton, Ohio, where Debs was scheduled to speak at the state's Socialist Convention, and then at a picnic — in fact, one named for him. Debs was then a 62-year-old veteran of the labor movement, who had helped found the American Railway Union (ARU) and the Industrial Workers of the World (IWW), and had gradually moved leftward out of the Democratic Party to various socialist organizations. In the 1900 presidential election, he was the Social Democratic Party's presidential nominee; after that party imploded, he was the Socialist Party candidate in 1904, 1908 and 1912. Voter turnout in that last election was so low that although Debs only got about 900,000 votes, that was about 6% of the total — one of the most impressive electoral performances by a left-wing independent in American history. (Robert La Follette got 4.8 million votes and nearly 17% of the total in the 1924 election, as well as his home state of Wisconsin; by contrast, Ralph Nader got almost 2.9 million votes in the 2000 election, but that was only 2.7% of the total.)

That election further cemented Debs' status as a celebrity, and America's most powerful socialist, prominently articulating an anti-capitalist, anti-corporate ideology that would inspire generations yet to come (including Bernie Sanders, who took Debs as something of a role model). By 1918, however, Debs was preoccupied by foreign policy. After considerable hesitation, the U.S. had committed troops to fight in World War I, which Debs believed was driven by irrational nationalist rhetoric and a combination of imperialism and capitalism run amok. (The term "military-industrial complex" was not yet in use, but Debs would surely have embraced it.) To him, the so-called Great War was about the working class suffering and dying for the benefit of the wealthy few.

Unsurprisingly, Debs was also opposed to the military draft, which put him at odds with Woodrow Wilson's administration, which had just passed an infamous law called the Espionage Act, which, among other things, made it a federal crime to interfere with conscription. When Debs spoke in Canton on that June afternoon, the audience included agents from the Department of Justice, eager to see if they could ensnare him in something that might conceivably violate the law. Debs was aware of the risk and warned his audience that he had to be "extremely careful, prudent, as to what I say, and even more careful and more prudent as to how I say it." Maybe he was daring the agents to come after him for whatever he said, and they took the bait, as did a federal prosecutor named Edwin Wertz after Debs said this:

They have always taught you that it is your patriotic duty to go to war and slaughter yourselves at their command. You have never had a voice in the war. The working class who make the sacrifices, who shed the blood, have never yet had a voice in declaring war.

As soon as he was charged under the Espionage Act, Debs knew he would be convicted. It was essentially a political show trial, an attempt by Wilson to intimidate left-wing critics into silence, in a wartime climate of patriotism when Americans were even more suspicious of the left than usual. Debs refused to call defense witnesses, speaking directly to the jury to explain why he was unwilling to play the court's game. After his inevitable conviction, he delivered a statement to the court that would later be immortalized:

I listened to all that was said in this court in support and justification of this prosecution, but my mind remains unchanged. I look upon the Espionage Law as a despotic enactment in flagrant conflict with democratic principles and with the spirit of free institutions …

Debs' 1920 campaign wasn't so much about anything he said or did as about the symbolic importance of "Prisoner 9653" running for president.

On the day Debs went to prison, a protest march in Cleveland was attacked by police, leading to the May Day riots of 1919. The Socialist Party nominated him once again as its presidential candidate, although he had not run in 1916 and likely hadn't intended to in 1920. Debs wrote numerous statements from his prison cell, detailing his views on everything from the war to class inequality. But his campaign wasn't based on anything he said or did, but the symbolic importance of the imprisoned free-thinker running for the highest office in the land. Supporters didn't just ask people to vote for Debs; they told them to vote for "Prisoner 9653." Word quickly spread that Debs, by all accounts a kind and courtly man in his personal interactions, was highly popular among both prison staff and his fellow inmates.

Of course Debs didn't win — he was running as a third-party candidate, after all — but he received just over 913,000 votes, slightly more than he had in 1912. Notably, that was only about half as much of the total popular vote (3.4%) as it had been eight years earlier, largely because the electorate was much larger: The 1920 election was the first in which all American women had the right to vote, following the passage of the 19th Amendment.

That was Eugene Debs' last presidential campaign. He declined to run in 1924, facing failing health, and died in 1926. If it had been up to Wilson, Debs might have died in prison — but it was the next president, conservative Republican Warren G. Harding (winner of that 1920 election), who ultimately let him go. After taking office, Harding sent Attorney General Harry Daugherty to discuss terms for a potential pardon or clemency with Debs. On Christmas Eve of 1921, Harding announced he would commute the sentences of 24 political prisoners from the Wilson era, and that Debs would be among them.

Harding made a point of criticizing Debs in his public statement, stating that he was guilty as convicted and calling him "a dangerous man calculated to mislead the unthinking and affording excuse for those with criminal intent." Harding said he was extending clemency because of Debs' age and physical frailty, and because he "was by no means, however, as rabid and outspoken in his expressions as many others, and but for his prominence and the resulting far-reaching effect of his words, very probably might not have received the sentence he did."

As Debs walked out of the Atlanta Penitentiary on Christmas Day 1921, he and his brother heard hundreds of prisoners standing at the bars of their cells cheering for him. Harding then asked for a private meeting with Debs — no reporters allowed — where he reportedly told him, "Well, I've heard so damned much about you, Mr. Debs, that I am now glad to meet you personally."

There are many lessons to be drawn from Debs' story, but perhaps the most important one is so obvious that it needs to be stated directly. When we talk about free speech, there is a big difference between people who merely face criticism for what they say and those who are actually persecuted or oppressed for it. If people write mean things about your Netflix special, or an online platform decides not to host a particular video, that's not oppression or censorship. But journalists targeted for violence over their reporting, or teachers who lose their jobs for telling the truth about American history, really are being oppressed, censored and silenced. Eugene Debs refused to shut up or follow the rules, and paid the price. That makes him a free-speech hero whether you agree with his views or not.